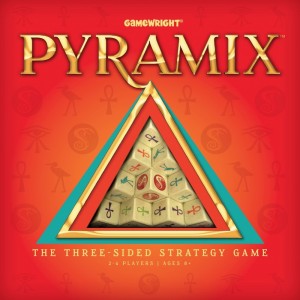 Abstract games are not a segment of the gaming world that I wait for in eager anticipation. My gaming groups tend to want to play more thematic games and I don’t get them to the table that often. Even though most abstract games are simplistic with their components, they can offer some very unique looking games.

The game I’m reviewing today was one of those abstract games that I was interested in because of how the game looks. Pyramix is a game for up to four players as they pull cubes from a 3D pyramid attempting to score more points than their opponents. The game has a simple premise, but there is a lot of strategy within that simple decision, like in most abstract strategy games. Let’s get into the review to see if this game can be worth a spot in your collection.

Pyramix is an abstract strategy game for 2-4 people to play in just fifteen minutes. In my experience Pyramix the game plays well with all player counts.

Pyramix comes with a tray and a set of fifty-six cubes to form a pyramid. On these cubes are four colors and symbols that determine the point values they will earn you at the end of the game. Each turn players will choose from Ankh, Crane, Eye, or Cobra cubes. Each selection will cause the cubes above to slide down until the only cubes left in the pyramid are the layer touching the base. Then those cubes will be distributed to the player who has the most Ankh cubes matching that color. The person who has the most points at the end of the game wins.

I have nothing to complain about when it comes to the bits in the game. One thing I was surprised with was the weight of the cubes. They are a lot lighter than I expected them to be, but this has no effect on the game play. The base is easily rotated which is necessary for you to view all available options on your turn.

Last thing I want to mention is the rulebook. Gamewright does a great job with their rulebooks. They explain everything extremely well and were able to answer any question I had while reading through it. Plus, it is folds up to a triangle shape.

Start by placing the base tray on the table and randomly stack all the cubes on top of it till it forms a complete pyramid. Three of these cubes can earn you points. Ankh, Crane and Eye cubes are all worth one, two and three points respectively. The last image on a cube is a Cobra and they are worth zero points but they impact the cubes you can take on your turn. Let’s come back to that topic in a minute.

On your turn you must remove any cube from the pyramid that either has two or three faces visible. If you choose one with two faces visible, the cubes on top will cascade down. There are only two conditions where you may not remove a cube. The first is if by removing, the cube would leave an open spot in the tray. The second is if a cube is touching a cobra cube’s flat side.

The game will continue until the pyramid is a single layer of cubes on the base tray. Then final scoring begins. If there are any cobra cubes left in the try, remove that cube and all adjacent cubes from the tray. Then players will sort the Ankh cubes they have collected throughout the game by color and compare their totals. If a player has the majority of ankh cubes, that person claims ALL the cubes of that color in the tray. If there isn’t a majority, no player receives the cubes.

After all the cubes are removed from the base tray, add up the values and the person with the most points wins the game.

At its core Pyramix is a very basic game. You are simply removing cubes from this 3D structure and totaling the points. Because the core mechanics and scoring are simple, you can teach this game very quickly. Throw all of the cubes onto the tray and the pyramid is ready for you to dismantle. If the game was only that, it would quickly find its way onto my sale pile. However, the game has some interesting strategic decisions for you to make that keeps the game on my gaming shelf.

One of these strategic elements is the cobra cube. Sure they are annoying as they block you from claiming a cube you wanted, but they serve as great tool for you to stop your opponents. As you see one player start to accumulate a certain color of Ankh or a high value cubes you can manipulate the location of that cobra by pulling a cube underneath. You can’t always do this strategic move, but when you can it’s satisfying. While manipulating the cubes location is enjoyable, it’s the end game distribution of cubes that makes this game for me.

During the game, you are tempted to take the Crane and Eye cube’s because of the higher point values. However, ignoring the Ankhs cubes will ultimately end in failure because you will have no chance at claiming any of the cubes left in the tray at the end of the game. What I like about this cube distribution mechanic is the emphasis it puts on each cube you and your opponents take. Each turn affects your scoring now, and the chance of earning more at the end of the game. This creates a situation where there are no throw away turns in this game. Players will have to rotate the pyramid around trying to see all the options before deciding on their next move.

I keep going on about strategy, but overall this game is on the lighter side of that spectrum. As you increase the player count, there are obviously more turns before you can go again. This limits the strategic planning for your next turn and opportunity to affect the other players. While the two player game allows for more strategic experience, the three and four players are more reactionary. This can lead to some slow turns by players who suffer from analysis paralysis. However, I found all number of player counts to be an enjoyable time.

The last thing I want to mention is how visually stunning this game looks on the table. It has simple components and art work, but there is something about the 3D nature of the game that makes it fun to look at. I love when games allow you to manipulate and create the game board. As you play, you get the feeling that you are destroying this monument piece by piece, an oddly satisfying experience. Had this game gone with another method then the 3D pyramid, I wouldn’t have enjoyed the game as much as I did.

I tend to not enjoy abstract games very much, but I ended up liking Pyramix. The pyramid rises off the table and invites you to interact with it. I enjoy the constant shifting of the cubes during the game because it forces players to adjust their strategies.

Pyramix is easy to teach. What makes this game for me is the interesting endgame distribution of cubes that requires players to make each turn count. While each move you make affects the other player’s turns, it is difficult to make moves that will greatly impact other players. Despite that, this will be a game that I will keep in my collection and worth looking at if you want to add an abstract game to your collection.

If you’d like to tear down your own pyramid of cubes, you can pick up Pyramix for about $20

Final Score: 3.5 Stars – A light abstract game that not only looks amazing but manages to make each turn have strategic significance.

Hits:
• Looks amazing on the table
• Easy to teach
• Method of distribution of cubes at the end makes each turn count

Misses:
• Can’t impact other players moves as much as I would like
• Won’t satisfy people looking for a heavy strategy game