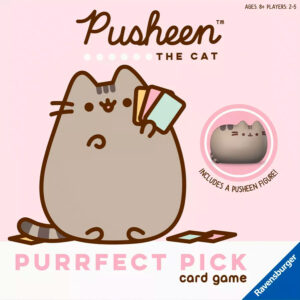 For those of you not in the know about Pusheen, she is a tubby tabby cat that has an entire profile and site dedicated to her comics and GIFs (though you can find her everywhere now). Her success is attributed to her ultimate cuteness bringing smiles and laughter to the social media landscape and I am very much a fan. I mean, look at her. She’s shaped like a friend. When we got word of the card game published by Ravensburger I hopped on it right away.

Pusheen Purrfect Pick is a light set collection game for 2-5 players that takes about 20 minutes to play. The best experience is with four players for maximum interaction on the mainboard without the frustration.

After populating the game board with Essentials cards and revealing four Snapshot cards, the player who most recently fed a cat gets to go first. On their turn, they place the Pusheen figure on one of the cat paw spaces then select an Essentials card adjacent to Pusheen or from the top of the Essentials deck.

Some Essentials cards may have special rules or actions that should be taken immediately but for the most part, will just be placed in your hand until you want to spend Essentials on a Snapshot card to gain stars. If any player has 10 or more stars at the end of the round, then the game ends and the player with the most stars at that time wins.

Of course, this is a cute and wholesome game so there is no tiebreaker (those who tied all win). If no one has 10 or more stars, empty spaces on the game board or for the Snapshots are refilled and the next round begins. The first player rotates clockwise (to the left) in this case so no one player runs away with a set too quickly.

It is an absolute joy and delight looking at all the cards let alone reading what the card titles are. You’ll derive the most joy from Snapshot card scenes of your “weekend” when spending Essentials on them. The two-sided board is cute but functional as one side is lighter and the other is darker if you have a preference of one look over the other. Essentials cards are bright and pastel, so the contrast of a darker background may be easier on the eyes.

As I mentioned, when turning in Essentials cards for a Snapshot card it really is wholesome beyond belief and you cannot escape it. For example, the Snapshot card “Believe in Yourself” is acquired when the Super Pusheenicorn is with the Pusheenicorn. Just explaining that to you gave me joyful giggles. I can only imagine that if there were a super version of yourself to have a conversation with over a weekend that the overarching theme is definitely to believe in the impossible.

Despite all this joy, I did find a couple of issues that were worth mentioning. Since star count is both the game timer and the winning condition, I don’t quite understand why the Snapshot card “Ski Trip” is so powerful in terms of acquiring them. If luck is on your side and people don’t notice that you’re trying to take several ski trips, the points scale too quickly since it counts itself and all other trips. I checked on the deck makeup and even though only 10% of the Snapshot deck is made up of “Ski Trip” cards all it takes is a bad shuffle for someone to have access to all of them. Unfortunately, while the glossy texture of the cards protects them from spills or accidents it makes it difficult to shuffle them properly to mitigate that, too. We’ve been wondering if a house rule is in order at this point but it’s a work in progress.

I just happened to be blessed by turn order and was able to overcome a Ski Trip strategy by ending the round on my turn. No one had the opportunity to take the win back from me but I’m not happy about the potential swing there. With a different turn order, different shuffle, or just really the luck of what was out there, I could have lost but that doesn’t mean the game is bad. I’ve learned over the years that playing light games like this requires that the players have a different expectation of fairness.

For those that are wondering, since space is important as your collection grows, the box is just the right size for any situation since they didn’t make it unnecessarily large. The default insert functions just fine to keep everything in place. Upon first glance at the box, I thought that the Pusheen figurine that comes with it served no purpose other than cuteness, but it does surprisingly have a function in the game. I admit I get a little giddy every time it’s my turn to move her on the mainboard.

The key to enjoying Pusheen was realizing that it was everything I needed it to be in 20 minutes, and for once the real fun was in the theme and just the choices you make along the way. That type of wholesome mindset is what makes it good at what it does and truly is Pusheen vibing throughout. However, some players out there may find that the theme is too light-hearted and the gameplay not interesting enough because they’re looking for settings where they can play out their wildest dreams. I really wish I could push the norm for my own usual gaming group from the Before Times but I just don’t know if they would give the game a chance simply because of how cute it looks. For me though, in a world that sometimes seems dark and hopeless, this game really puts a smile on my face with ease and not many tabletop games do that.

Pusheen Purrfect Pick is for those looking for a cute filler game that is sure to bring wholesome vibes to the table or for general fans of Pusheen who need more Pusheen around. Gameplay may not always feel fair or balanced but it’s about the journey. If you’re looking for a more strategic or “crunchy” game to occupy 20 minutes of your time, Pusheen Purrfect Pick isn’t it.

Final Score: 3.5 Stars – Have a great weekend worthy of snapshots set in the world of Pusheen in this light set collection game that plays up to five.

Misses:
• Glossy cards are difficult to shuffle
• Gameplay may grow stale over time
• Theme may not appeal to everyone