We review Pucket, a two player dexterity game with some great production values. In Pucket, players are trying to be the first player to get all their discs on their opponents side fo the board. 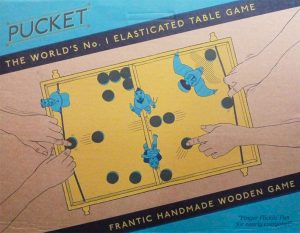 Dexterity games come in all shapes and sizes. That’s one of the things that makes them so unique. They can be games with lots of moving parts and depth, like Seal Team Flix, or casual affairs with single goal, such as Rollet. Today’s review of Pucket falls into the latter category. The goal in Pucket is simple, but winning can be anything but.

Pucket is a 2-player dexterity game that takes about 5-10 minutes to play.

Pucket is one of those games that doesn’t really take a lot of explaining to jump in and start playing. Just looking at the board, it’s fairly obvious what you need to do. This works well with the fact that the production values on Pucket are pretty spectacular. So, this could easily be a game you keep out on a table (as long as it can accommodate its rather large size) and stop for a quick game when the mood strikes.

When it comes to the game play, the best thing Pucket has going for it is the tension it creates during the game. As the game progresses, and one side starts to get loaded up with pucks, an almost panic sets in as a player begins to lose. Interestingly, I’ve seen that same player get into a groove and flip the board state in a matter of moments and eventually win the game. It’s moments like this where Pucket will shine the brightest. Like a sporting event where one side begins to take command, player momentum is a real thing in Pucket.

However, Pucket is also a one trick pony, even if it does that trick rather well. The gameplay is pretty much ‘what you see is what you get’, making it a game that most gamers will play once or twice and then be ready to move onto something else. Children will probably get the most mileage out of Pucket as every kid I’ve played this with has had a lot of fun and wanted to play multiple games in a row.

If you are a fan of face paced, easy to jump into dexterity games, then Pucket will find a happy home in your gaming library. This one works exceptionally well as a family game. I’m doubtful that it would see too much table-time with your gaming group, as the novelty does tend to wear off pretty quickly. It does boast excellent production values, but it also takes up a lot of space. So those can be hit or misses depending on your situation. But Pucket can be almost as exciting to watch as it is to play, so it does make for a fun party game, especially with its easy to learn rules.

Final Score: 3 Stars – A frantic and quick paced dexterity game that is fun for a quick play but doesn’t have a ton of staying power.

Hits:
• Easy to learn rules
• Frantic nature of the gameplay is fun
• Skill will trump randomness

Misses:
• A one trick pony
• Takes up a lot of space