We review Psycho Raiders, a "horror simulation" board game published by Cave Evil. Psycho Raiders seeks to drop players in the shoes of an old school horror movie as one side controls the campers seeking safety and the other the evil raiders. 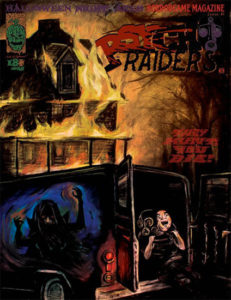 Game designers are on an endless quest to find that perfect balance. A game where no matter what side you are on, everyone has an equal chance at victory. A game with no overpowered strategies or broken combos. And along comes a game called Psycho Raiders and says, “Hold my beer and watch this”.

Psycho Raiders is a hex and counter simulation game for 2 to 7 players that takes anywhere from 15 to 45 minutes to play.

Psycho Raiders is an asymmetrical game where one team controls a group of 3 campers trying to survive and escape, while the other group controls the raiders, who are determined to not let a single camper live.

Each round starts with an event phase, followed by the character turns. Each character may move and then take an action, starting with the campers. Movement is based on the character’s speed, with one hex equaling one point of movement (expect for some terrain costing an additional point).

Actions involve opening doors, searching for weapons, hiding/seeking and attacking. The campers will try to hide as often as they can, which creates a guessing game for the raider players as they need to figure out which token is real, and which is the bluffing one.

Combat is handled via opposing die rolls, with weapons and strength adding bonuses. The difference in the rolls is inflicted on the loser, who must choose to lose speed and/or strengths points. If both stats reach zero, the player must draw a kill card. If the icon on the card matches the weapon type used, the character dies a gruesome death. If not, the character is reset back to the stats they had before the attack.

If a camper can escape off the top side of the map while hidden, they win the game. If the raiders kill all the campers, they will be victorious.

When I mentioned in the intro that the game wasn’t balanced, I wasn’t kidding. I had a camper die in the second round of play and she never even stood a chance. The raiders are grossly overpowered in combat at the start. If the campers don’t run and hide immediately, the game will be over before it even begins. Normally in a game, this would be a massive issue. Yet Psycho Raiders makes no bones about how it’s supposed to be. Really? A game can be grossly unbalanced and we’ll still come back for more? Oh yeah.

Psycho Raiders bills itself as a “horror simulation experience”. They are trying to recreate the feeling of tension and story you get from those old school horror movies. Films where most of the campers die before the rest even know there is a murderer on the loose. In those movies, the campers don’t win. Some may survive, but it’s usually only a fraction of the group. The killers are strong, powerful, and it takes a gross amount of luck for anyone to escape alive.

And that’s what Psycho Raiders is going for. Not a perfectly balanced war game, but something that’s going to create a memorable experience. The graphics in the game are definitely not for kids as they are gruesome, visceral, and not shy about embracing the subject matter. This all builds on the camp feeling you’ll get from the game. In an era where games with buckets of miniatures, gorgeous artwork, and custom inserts, Psycho Raiders is content to go low budget with its components. The whole package comes in a magazine, with a sheet of tokens and a fold out map. Cards need to bet cut out with scissors and players even need to supply their own dice. Yet it all works. It brings back memories of the old Heavy Metal magazines.

The best group for Psycho Raiders are going to be the ones that want to immerse themselves in the simulation. Gamers who not only love a thematic game, but like to tell a story while they play. Fluke crushes in Ginger’s skull with his spiked club, and all that’s left is a red smear on the side of a tree. Players can have a ton of fun with the crazy nature of the game’s over-the-top slasher flick theme.

Further reinforcing the theme are the nice little touches in the game. For instance, if the campers can get to a phone, they can call on the townsfolk to help them out. If they do, they will get extra people to help them fight off the raiders. However, there is a chance that the town person they call is actually a “sinister” one and secretly on the side of the raiders. It’s just another way the designers injected some tension into the the game.

However, as fun as the theme is, I should warn others that the mechanics can be a bit clunky at times. They rulebook is not laid out very well, so you’ll need to skip around to find bits. But things like grappling, vehicle movement, or line of sight aren’t always the most intuitive. This is definitely a game that plays better the more experienced you are with it. Expect your first game to be a little rough.

Psycho Raiders definitely isn’t going to be a game for everyone. I know that gets thrown around a lot in reviews, but never has it been more true. The theme alone (and graphics) are going to turn off people right away. Gamers also looking for a perfectly balanced gameplay are also going to want to steer clear.

However, if you are a fan of 70-80s slasher flicks, or games where you can not only immerse yourself in the theme, but even tell a story as you play, then Psycho Raiders is going to be your jam. It’s rare I can say I had fun playing an unbalanced game with crappy components, but Psycho Raiders delivers on everything it promises, and then some.

Final Score: 3.5 Stars – While not for everyone, the game definitely works as a horror simulation experience.