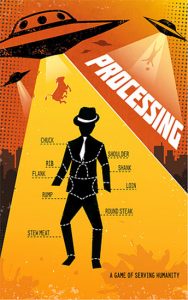 Seppy Yoon is a weird dude. He is exceptionally nice and a joy to game with, but readers should know what they’re in for with this next review. Seppy’s mind is the kind to take a Twilight Zone episode to the next level. He’s the kind of guy who takes a strange mixture of pop culture and science fiction and comes up with themes for games. He’s the game designer for the next game to probe.

Processing: A Game of Serving Humanity takes its name from a famous Twilight Zone episode where aliens land and agree to work with humanity to improve Earth. As a thank you to the aliens, humans agree to journey back to the alien home planet. Here’s the famous twist and a big SPOILER ALERT. After translating the key book used by the aliens, the humans realize that the title “To Serve Man” actually means how to cook and serve humans as food for the aliens. Creepy.

This is where Seppy’s mind goes and his game design begins. The high concept here is that several types of aliens have landed, want to eat people, but can’t tell the difference between people, specifically hipsters, and cows. If players can help the aliens sort through the creatures without getting eaten themselves, they win. It’s a hand management and voting game for 3-6 players. It’s best with 4-5 and at that player count, expect the game to take about 40 minutes.

Explaining the setup of the game will help explain how the various mechanisms work together.

There are two main tracks in the game, each with a player’s token. The first is a typical victory point track. The second tracks how many Mad CAO (pronounced “cow”, short for Confederated Alien Overlords) points a player has earned. The Mad CAO track is the more dangerous one because the player who has progressed the furthest on this track loses at game end.

There are also two main types of cards. The Agenda cards represent the various aliens that the players serve. Playing an Agenda card will indicate which Alien orders the player supports. This is indicated by 3 orders for the hipsters and cows: Probe (aka “examine” in an alien way), Meat (they want to turn the group into food), or Freedom (set the group free). Some aliens want to eat hipsters and set cows free. Some don’t care whether they set a group free, as long as they probe hipsters. There is a vast mix.

The second type of card are Lot cards. These cards will come out on a certain schedule and will provide spaces for voting for individual cows and/or hipsters. Players will play voting tokens to an available Lot card to decide the fate of all cows and hipsters on the card. If a card gets two votes for Freedom and one for Probe, the entire collection of icons on the card (cows and hipsters) will go into a column along with all other Freedom cards.

As the collection of Freedom, Probe, and Eat cards build, these fuel the points that players will earn when it comes time to play their Agenda card. If the stack of Freedom cards has a lot of hipster icons, then the player will want to play an Agenda card that aligns with Freedom for Hipsters. For each icon, the player would then score one victory point. However, players will also move up the Mad CAO track if they met the requirements from that same Agenda card. As an example, if an Agenda card also has an icon that gives Mad CAO points for hipsters, the player would also move up the Mad CAO track that same number of points.

It’s obvious that Processing: A Game of Serving Humanity has a unique theme, and that is a huge plus for this reviewer. Amazingly, none of the mechanisms, as silly as the concept of the game is, feels inappropriate or gamey. In a sense, the do-or-die implications of each vote often has other players chanting “Probe” or “Meat” around the table. The trick is the group needs to enjoy the humorous theme, and that is a core requirement before considering a purchase here.

What really works are the voting mechanisms in the advanced game, which introduces a double vote, secondary scoring possibilities, and a chance to switch allegiance such that the highest number of Mad CAO points wins the game for the player. This takes the game to another level of negotiation and deduction when seeking support and/or second guessing every player’s actions. Since Agenda cards are secret, players will never really know how each player will vote; they can only guess based on the available Agendas.

That’s one of the points that brings down the overall experience. Even though players have some control, with 6 players, there can often be a feeling of no control since so many people are voting and players often want to complete a card instead of being the first voter on a new card. Ironically, the same is not true at 3 players, but there is still something lost in the social aspect of the game as players tend to stick to their own agendas. With a partner in a 4 or 5 player count game, the prospects of avoiding being eaten are optimal.

Even with a funky theme, Processing: A Game of Serving Humanity is a good game. It doesn’t make it into higher rating territory mostly because of the nuances with 6 players and the specific theme. Additionally, some people won’t get into it and appreciate the humor of voting hipsters to get probed by Space Clowns. The strong elements of guessing how other players will vote compared to what options you have is what keeps this mental challenge fresh each game, which likely will only be for certain occasions.

Final Score: 3.5 stars – Just the right kind of humor and light strategy for a filler game at a convention or big game night. This is the kind of mental work that encourages players to keep guessing about their opponents.

Hits:
• Hilarious theme if it suits you
• Challenging to guess what other players will vote
• Requires social engineering to do well

Misses:
• Higher player counts has a loss of control feeling
• Social aspect can be lost with certain groups