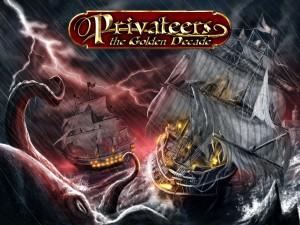 The Age of Sail has long been one of my favorite themes in board gaming. This is partially because I enjoy sailing in real life, but also because it was an age of discovery where man had to battle the unknown to survive. There is just something about it that has always sucked me in.

Today, we are going to be looking at Privateers: The Golden Decade. A new “competitive board game for 2 to 5 players that takes the life of 18th Century’s piracy on your table.” Now in funding on Kickstarter, we are going to dive into this nautical adventure and see if it’s worth investing your gaming dollar.

Privateers: The Golden Decade is played out over the course of 15 rounds (or sometimes less). Each player will be in command of a pirate ship as they pick-up and transport loot, battle other players and colonial ships, and capture ports.

In addition to battling a rampaging storm cloud, players must also avoid the wrath of the kraken. The game ends after 15 rounds or until a specific number of cities are captured (number of players +1). At that point, the player with the most points (based on a number of factors) is the winner.

The game board in Privateers is modular, so the archipelago can change in each of your games. The tile with the pirate’s islands always goes in the center, and then each of the other 7, dual-sided game boards are positioned around the pirate’s tile.

Each player starts the game with a pirate ship (which lists its stats such as movement, weapons, crew, and upgrade slots), 20 doubloons, a command token, ship and load pawn, and pirate markers (to be used when taking over a city).

Starting with the first player and going around clockwise, the game is played out over a series of rounds. Each round has two parts:

1. Wind
The first player spins the wind dial and whichever direction it lands all, all ships are moved 2 spaces in that direction. While moving, there is a chance ships could collide with something, causing damage, or forcing them to drop items.

2. Turns
Each player takes a turn comprised of the following 5 steps:

1. Restoration: For each crew member, a player can restore one damaged ship token.

2. Movement: A player can move their ship a number of spaces equal to its base speed, plus any sail tokens it has. Completing a mission or entering a port will end a ship’s movement. A ship can only enter a port if there is a truce token in play for that nationality or if they have a letter of marque for that nation.

3. Battle: If a ship ends its movement on a hex containing another ship, combat occurs. Each player than chooses one card to play from among the available ones (based on their weapon type). If a player is fighting a colonial ship, a random card is chosen. Once the chosen cards are revealed, they are placed side-by-side. The icon on the card you played is compared to the matching icon on the card your opponent played. That tells you your strength and what kind of damage you take. The winner of the fight gains 10 doubloons or a command token (if fighting another player).

4. Trading Phase: If in port, a player can buy and sell upgrades for their ship. These are in the form of letters or marque, sails, bigger weapons, or even a better ship. If a player is selling goods tokens that they acquired during their trip to sea, they sell for a number of doubloons based on how far away the token was picked up. A player can also conquer the port if they have a crew token, goods token, and letter of marque for that nationality

5. Event Phase: The player spins the wind rose and executes the action it lands on. The actions range from moving colonial ships or the Kraken, to changing the truce token to that of a different nation, or to place more tokens on the game board.

During a turn, a player can also complete a mission. Each mission has 3 parts (missions are publicly available to all players): An action, an item, and a location. Players must go to a specific location and carry out the required action. These range from picking up an item, to buying an item, to fighting. After completing the mission, the player gets to draw a reward tile and a new mission is revealed.

The game ends at the end of the 15th round, or after a number of cities have been captured based on the number of players +1.
Players score points based on their doubloons, ship, command tokens, cities they own, and equipment tokens. The player who has the highest score is the winner.

At its heart, I think Privateers: The Golden Decade is a pick-up and deliver game. While yes, there is some combat, the real focus of the game seems to be on taking items from one location to another. And for that mechanic, Privateers does some interesting things.

I was a big fan of how they handled the delivering of goods. When a ship picks up a goods token anywhere on the board, the player leaves their load token in that spot. When delivering the good, the player counts the number of spaces from the load token to the port and consults a chart (with a sliding scale). This tells the player how many doubloons they earn (with farther places earning more coin). It was a really clever mechanic that rewards players who take the time to deliver the goods farther away.

I also liked how the game was on a timer. Since there are two ways to end the game (rounds or port capture), this can prevent the game from dragging on longer than it should. In our early games, we tended to focus on earning money and really didn’t try to hit the ports. This could have made the game overstay its welcome without the alternate way to end.

I found the handling of combat in the game to be pretty unique with its almost rock-paper-scissor mechanic (but not really). You play a card and compare to what your opponent played. Every card has the same 3 icons on it, so there is going to be some randomness as you really have no idea what your opponent will play (unless you think they are wanting to target something specific on your ship).

However, it also felt like combat really wasn’t worth it in the game. Part of that was because your ship will always be damaged in combat. Thematically, it makes sense I guess. I can’t imagine any ship escaping unscathed in a naval battle. But compared to sailing around, picking up loot, and delivering it to ports, combat seemed to be a less attractive option. I tended to focus my efforts on that and completing missions.

The port actions worked well in the game though. I liked upgrading my ship and buying new ones. The game lets you upgrade your ship to a better class by only paying the difference in cost. There are many different ships so you can decide whether you want a ship that focuses on speed or one on cargo hold. This allows players to play the game that really suits their style.

The one thing in the game that I didn’t care for had to be the wind phase at the start. Every ship will randomly move 2 spaces in one direction based on where the spinner lands. In practice however, the mechanic was a little clunky. There are over a dozen ships to move and they are constantly bumping into islands or other things. Overall, I didn’t really care for that phase and wish it was the colonial ship movement was handled a little smoother. Also the sailor in me didn’t like the idea of being forced to move in the same direction the wind blows.

Finally, I really liked the command tokens. The game has a decent amount of luck in it with the spinner and the combat cards, so it was nice to have an option for boosting your actions on your turn. They can be cashed in for extra movement, more money when selling goods, additional repair actions, or better weapons in a fight. These have the added bonus of making combat vs other players more attractive as they can give you access to better weapons or quicker repairs. It was a nice touch in the game design to help give players a bit more control over their destiny.

Overall I found that Privateers: The Golden Decade has quite a few interesting mechanics that helps it stand out in an otherwise crowded genre. I really enjoyed sailing around the archipelago and collecting loot to be delivered to various ports. I also thought the way port entry was a nice touch (having to wait for a truce to be declared or buying a letter of marque).

While I wasn’t a big fan of the wind movement at the start of the round, I think GER Games still has time to tighten up that mechanic before it ships. If you want a game with a good amount of variety in the age of sail, then check out Privateers: The Golden Decade.

If you’d like to become a backer, pledges start at €45 for the full game and stretch goals. Privateers: The Golden Decade is scheduled to be in backers hands in March of 2016 and you have until Sunday, October 4th to become a backer. Head over today and check it out.