We review President Bigly, a quick playing, political themed board game published by Origiami Gameworks. President Bigly is a game of pigs, politics, and utter randomness. 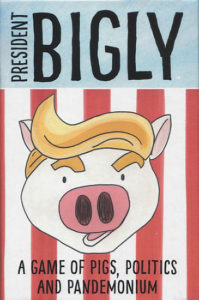 Normally, the so-called writer-refugees that huddle in the Board Game Quest bullpen (not a real bullpen) are content to bide their time waiting for that big breaking story when a large, lavishly produced game lands on our desks. In these moments, a stream of wannabe-great titles flows through our game tables eagerly hoping to be handed a rose at the end of each review day. This is the tale of one of those games.

President Bigly is a rare game. It fuses the political, humor-laden zeitgeist with gameplay akin to hot potato. It’s an exploding kitten trapped in a paper bag of satire concerning #45 (45th President). If you get where this is going, you might be in the market for this game.

This card game aims for 2-6 players to try to create chaos over 15 minutes. It aims to make gaming great again at 3-4 players.

Gameplay is simple. Each player has a hand of five cards including one Chaos card. During a turn, each player will play a single card or multiple cards and then draw a card. Depending on the card(s) played, there may be additional instructions to follow. Suit cards played in sets grant some bonus actions.

Now you, dear, dear reader, have come to the section of the review looking for justification for this purchase, or advice regarding hesitation to click on the “Buy Now” button. Please do not click, and please know that you are still a smart person if you already bought this. Yet, in the opinion of this writer, this is a bad game; a very, very bad game.

The unending and inane tidal forces of chaos that rule this game hearken back to memories playing Exploding Kittens, another ridiculous game whose only conceit is the connection to the mildly humorous art of cats in ridiculous garb. Here, much is the same. The rules feel as if they’ve borrowed heavily from a poor choice of mentor. The choices in the game are minimally effective, the random draw of cards the only tension, and the only saving grace is the short playtime.

If there is any appeal, the art and the humor at the expense of #45 would be it. Any would-be purchaser is likely seeking this game out for the comedic appeal amongst friends. In that regard, it is smirk-worthy at best. The art is childish and intended to be as if to further mock its subject matter. However, it endears this reviewer very little to the product as a whole.

(Note: Just to be sure our readers understood the political leanings of the author of this review, Tahsin Shamma is a left-leaning voter, but very often has mostly centrist opinions when it comes to politics.)

Fans of politics who have tapped out on the mat of self-loathing over the last election may find some solace in President Bigly, but no others will. Neither hardcore gamers nor the lighter beer and pretzels crowd will find anything more than the mildest of amusement from this product, and, even then, it could only be from the art. Save your hard-earned money and find your tranquility elsewhere. 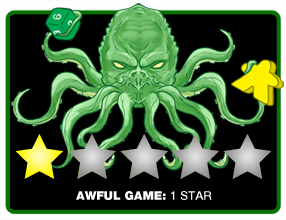