We review Power 1, a new take on the classic card game Rummy. In Power 1, players are trying to either be the first to go out or be the last one left in the game. 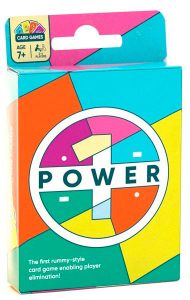 Power 1 gives rummy a twist. In addition to making sets, you’ll work towards building up and clearing sets of your own or other players to clear your hand first. Fewer numbered cards will limit your opportunities, but jokers add an opportunity for power plays. Can you knock other players out before you are eliminated, or can you be the first to play the last card from your hand?

Power 1 is a set collection game for 2 to 4 players. It plays best with four.

In Power 1 you’ll attempt to get rid of all your cards or knock out other players by making them unable to take actions. Players start with a hand of ten cards. On your turn you can lay down a power meld (three number one cards of any color), play a classic meld (a simple run of three cards of the same color), or lay cards on another meld on the table.

A joker is included, but instead of representing wild card, it’s used to block off sections of the meld, rendering them more difficult (in the case of multiple jokers, impossible) to finish. Melds are considered complete once all the cards reach 4. These melds are then discarded. If a player has only one meld in front of them and another player completes it, they are knocked out of the game.

Play continues until one player gets rid of all their cards or there is only one player left. That player is the winner.

Power 1 is a fast-playing rummy variant. While I was a fan of the pocket-sized box, it’s really got too much table presence for travel play (once each player has a couple melds it starts hogging table space.) The modern art style is really eye catching and reminiscent of Mondrian or Kandinsky. I’m a fan of the design, but it’s sometimes a little difficult to read.

The rules come as one lllooonnnongggg sheet, which can be a little hard (once again) to read. There are several visual examples that help to decipher actions, but I found myself wishing my French was better so I could just read the original. Some are easy to suss out—lay off for lay down, for example—but occasionally you might find yourself rereading a sentence three or four times to determine exactly what it means. Additionally, it switches from second person to third person (and then only he/him) a couple of times.

The limit in runs is an interesting twist but is severely limited by the small deck and number run. As it is, games can wind up severely shortened, or there may be rounds where all players draw and sort of shrug about playing more cards. While the ability to counter a power meld (the set of 1s) is part of the rules, it literally never came up in six playthroughs.

Power 1 boasts on the box that its “the first Rummy style card game enabling player elimination” but I’m not sure that’s something to brag about. With the strangely variable playtime, this could mean a player sits at the table several minutes while play continues without them—who wants to do that?

New games based on classic ones are a fantastic gateway for new players to join modern gaming. Unfortunately, while Power 1 gives us a twist on the classic Rummy, it may not be the entry point you want to choose to introduce your friends to the hobby. This Rummy variant, unfortunately, takes everything fun about the original and makes it dull or frustrating. Player elimination wasn’t needed to spice up the classic game, and the rulebook in Power 1 needs an overhaul as well as a better translation.

Final Score: 1.5 Stars – Unfortunately FANTASTIC art couldn’t save this from being a jumbled mess.