We review Posthuman, an exploration game that submerges players into a post-apocalyptic wasteland racing to be the first to reach The Fortress. However if you turn mutant, then the game and goals change for you in this creative board game. 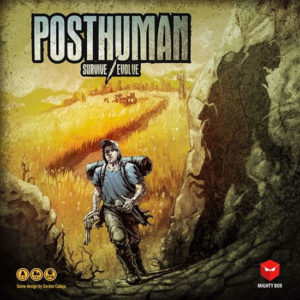 If I had to point to one early game that still makes me gravitate to the post-apocalyptic genre, it was Gamma World. In my early years, I loved this game from the setting and the advance technology, but it was really rolling up mutant PCs. I never understood why another player wanted to play a pure strain human. Rolling mutations and using those powers in game was so much more fun and rewarding.

This brings us to Posthuman. This exploration game submerges players into a post-apocalyptic wasteland racing to be the first to reach The Fortress. But if during the game you turn mutant (hence the intro hook), you then try to win by turning the other human players into mutants.

Posthuman is an exploration game for 1-4 players and plays between 90-120 minutes and plays best with 2-3 players.

I will say that there’s a lot to cover with Posthuman so we’re going to do a high level overview but the actual rules are here if readers want them: Posthuman rules.

Players can select from 6 pre-generated characters to play or can create a custom character. After your starting stats values, equipment, weapons, skills, food, and ammo are set, play begins.

It’s important to note that there are two boards for all players. There’s a Central board that will track all characters encounter progress. But players will individually have their own set of terrain tiles to move on.

The turn order begins with the starting player and occurs in the following order:

• Event Resolution: An event card is drawn and resolved.
• Eating: Players must consume a food token or else suffer the negative effects.
• Declare Action: players choose 1 of the 4 actions:
(1) Camp – This allows players simultaneously to restore health and sometimes morale.
(2) Forage – Once a player completes a tile, they can forage for items. They a draw supply card and gain equipment, food, bullets, and/or weapons that match tile terrain type.
(3) Scout – A player draws a number of terrain tiles equal to the vacant exits on the current tile and places them as they see fit.
(4) Move – If a player can do one of the following:
• If a player is on a completed tile, then they can draw a new tile and move onto its first zone. They may also move to a completed tile instead.
• A player may move to the next zone of their current tile.
(5) Mutant Player action: Mutant players who did not have their action activated now can take their chosen or default action.

Players will be mainly interacting with the encounters listed on their terrain tiles. Each tile will have 1-3 encounter zones and each will need to be resolved individually. Encounters include combat attacks from mutants and humans, overcoming obstacles, or resolving moral dilemmas.

Encounters are numbered 1-3 (as the number increases so does the difficulty). When each encounter is successfully resolved, then a player moves their player marker to the next space on the central board. The first player to resolve the final level 3 encounter moves to The Fortress and they win.

During combat encounters with mutants, a player will gain a scar card when the mutant damages a player in melee. Some scar cards have no effect but when a player gains enough mutant power scar cards they immediately turn mutant. Their goal then changes to stopping players from reaching The Fortress by turning them into a mutant. The mutants will win when all players have turned mutant.

Right out of the box I loved Posthuman. I will caution readers that the rules are involved and you will be referencing them throughout your first and possibly future plays. This is not a big negative, but there is a significant learning curve to this game. The rules around combat are probably the most difficult to pick-up and retain. The custom dice and new iconography takes some getting used to plus weapons, skills, and encounters will affect the results.

That said, once you have a good handle on the rules, there’s a lot to have fun with playing Posthuman. The first positive was character advancement and creating custom characters. As player’s successfully resolve encounters, they will gain experience points (XP). When a player has enough XP, they can purchase new skills and increase stats. Also, being allowed to make your own character is something I think most gamers will like, especially those with an RPG background. Both character advancement and customization adds not only to the game play but the replay as well.

But what I enjoyed the most about Posthuman are the variety in end game goals. All players start with trying to reach The Fortress, but if you become a mutant then you want to change all players to mutants. This was a slick way to keep players involved and engaged. Posthuman actually give players the option when they have 3 or 4 scars to suppress turning mutant or to give in. This gives players a level control of their game play which I think many will embrace. Overall this additional goal also enhances the game play, replay, and it excellently supports the post-apocalyptic mutant theme.

It’s worth noting for Posthuman that the production values are excellent and support the game’s theme as well. All pieces are top-notch. An example: the encounter cards which have post-apocalyptic images of your foes both mutant and human. These definitely submerge players into the post-apocalyptic wasteland visually. And as you draw events and gain scar cards, these will trigger eerie and mutant mental images during the game. As a whole, it all ties the game together and completely supports that theme from start to finish.

I will warn players that luck can be significant in Posthuman, due to the dice rolls and card draws (which is to be expected). So be aware that bad draws or poor dice rolling might sour some players from current and future plays. Posthuman does try to help players with additional skills, improved weapons, and some player advantageous event cards to help affect dice and your ability to choose tiles. Unfortunately, there’s no cure for bad luck.

I have to give credit to the designers for making an excellent, well supported, post-apocalyptic exploration themed game. The character advancement, customization, and stellar production values make Posthuman an easy must have and play for me. Again, I absolutely love the changing player goals and wish more games would do something similar. I am a big proponent of dropping the player elimination aspect that most gamers loathe and have out-grown.

However, there is a definite learning curve to Posthuman, which means you will need to invest a decent amount of time on the rules before getting this to the table. Posthuman also plays longer than estimated, but it’s a challenging and rewarding experience once you finish a play through.

Final Score: 4.5 Stars – A well-built post-apocalyptic exploration game with high replay value. This one will be in my collection for a long while.