We review Poetry Slam, a word building party game published by Mayday Games. In Poetry Slam, players are trying to form poems out of words and letters given by the wordsmith.

“Woman… woe-man… whoah, man!
She was a thief, you got to believe,
She stole my heart and my cat.”
– So I married an Axe Murderer 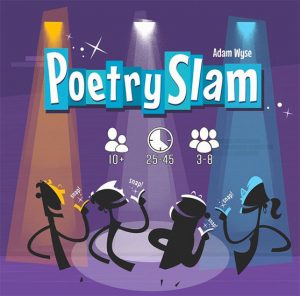 Its slam poetry night – groovy, daddyo. Are you the hippest cat in the room? Poetry Slam will challenge even the most swinging rhymesters to create a couplet that will be clear enough that an opponent can guess your secret word, but not so obvious that you can’t make it through your happening beat. Far out.

Players will be creating two-line poems as a riddle or clue to help their opponents guess their secret word.

Each player gets a score sheet, player screen, and a player board. At the start of the round, each player receives a speed tile and a player (the wordsmith) will flip a letter and a word prompt card. These will indicate that the players must chose a secret word that includes the letter chosen AND in the place indicated on the prompt card (for example, the letter ‘L’ in the THIRD place in the word, so I might choose ‘salmon’ as my word.

Once all players have chosen their word and written down their score for speed and length of word, the poetry phase begins. Each player must come up with a rhyming couplet that conveys what their secret word is without directly stating that word. Based on my choice of ‘salmon’ I might go with “I’m a shiny fish, going upstream is my wish” as my poem.

Once a player has their poem, they immediately read it out – there’s no turn order. A correct guess gets 1 point for the guesser and 3 points to the poet if they finished their rhyme (only 2 if it was guessed before the end.)

Once all poets have gone, the players will flip the speed tiles over to reveal a letter. Players cannot use the letters they’ve received in secret words during later rounds.

Additional points will be awarded via snap tiles – each player starts with three and can award them for particularly impressive rhymes. Slams may be awarded for breaking the rules and will count against you in the end.

After all rounds are completed the game ends and scores are tallied – highest score earns the respect of your peers and the win.

Are you hip? Are you cool? Are you good at word games and riddles in the dark? Poetry Slam is a clever twist on the word game genre, creating a riddle like game that will make poets our of even those who don’t know it.

The rulebook is an accordion piece of paper that stands out as a little riddle like as well – you may have to do a sample round as you’re reading through to get the instructions straight for everyone at the table.

That being said, once you’ve ciphered out the rules this is a fun, creative party game for folks that like words. There are plenty of games that require making words out of letters or attempting to have something guessed without giving out TOO much information; but combining both into a beat poetry/rap battle type game adds some additional complexity for your etymology minded friend.

The game boasts nice components as well – the screens are sturdy cardboard that won’t fall over in a stiff breeze and double as a player aid (fortunately, as the type on the scorepads is a tad small). And the included pencils HAVE ERASERS. Snaps to Mayday for figured out that ever word game player hates those damn golf pencils.

While the player count lists 3-10, I’m going with about 6-7 as optimal. Under five just doesn’t get you into the swing, and over 8 takes long enough to disrupt everyone’s groove.

Itching for a happening night of terrible rhymes and riddles? This is your bag, baby.

Poetry Slam is a clever game that combines a couple of classic word game mechanics. Nice components show some thought went into making this party game stand up to actual party play. Poetry Slam is a clear win for those into etymology and riddles, less so for anyone that might get hung up with rhymes for orange.

Final Score: 4.0 Stars – All the hip, literature minded cats at your next happening are going to dig this funky word play.

Hits:
• Clever combination of already familiar mechanics
• Nice components will stand up to party play
• Party game with thoughtful scoring that isn’t ‘Karen thought it was funny’
• Did I mention ERASERS?

Misses:
• If you don’t like word games this isn’t going to win your heart
• Too many players may drag out the fun, too few and the party’s DOA