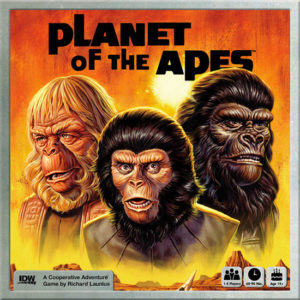 Planet of the Apes has always been one of my favorite movie franchises. The original movies were among the first DVDs I owned and fondly remember watching through them with my dad. While they weren’t all great, I’m looking at you Battle for the Planet of the Apes, they certainly have a nostalgia value for many folks today.

Today we are looking at a cooperative board game from IDW Games based solely on playing through the 1968 movie. It plays 1-4 players in 60-90 minutes.

In Planet of the Apes, each player takes the reins as one of four parts of Colonel George Taylor’s psyche. As the only main human character in the original Planet of the Apes, it makes some sense that everyone has to kind of split up our protagonist. Regardless, each turn you will take up to 3 actions in an attempt to complete encounters that travel through the timeline of the film.

There are 8 scenes that you play through. Three of them (the 1st, 3rd, and 5th) are minor scenes that are the same every game and just give players a simple decision to make that provides a little bonus as you go into the next major scene.

In the major scenes, players will collect action cards and attempt to complete encounters. Each encounter basically gives you a Yahtzee-like experience where you roll, and potentially re-roll, dice in an attempt to meet whatever conditions are outlined by that specific encounter. They are pretty straightforward—try to get 5 in a row, or try to make two pairs, etc.

Each encounter tells you how many dice you start with and how many re-rolls you are allowed to use. Action cards can be used to increase your odds, but only cards of specific suits can be used for each encounter. If you successful, you will make progress toward completing the scene. If you are unsuccessful, you will be closer to failing and likely take some damage as well.

For the first five scenes, you will always progress through to the next scene, even if you fail. However, if you are unsuccessful during any of the final three scenes, you lose the game. You also lose if all players take 4 or more damage and are defeated. Defeated players aren’t eliminated but are weakened and lose their special abilities.

Planet of the Apes is a cooperative game based on a hugely popular IP. It has great art that evokes the feelings of the original movie. Each encounter card has a ton of flavor text that explains the moments that happen throughout the movie. Unfortunately, that is where the theme ends. The game and its mechanics don’t integrate the theme in any meaningful way.

My first play through of Planet of the Apes was widely the most enjoyable. Each scene—even the minor scenes—were surprising. The flavor text was interesting. And when we made it to The Discovery we had no idea what was coming. With each subsequent play though, the engagement continued to wane. The introductions to the major scenes and all of the text around the minor scenes don’t change and you will likely just skip right over reading them after the first time. Even the thrill of The Discovery becomes pretty uninteresting when you know exactly what awaits you and have likely tried to plan for it.

But, I’m a euro gamer at heart, so lack of theme can certainly be forgiven with interesting and engaging gameplay. However, the encounters just didn’t provide much in the way of interesting decisions to make throughout the game. You will try to maximize the number of dice you have before trying an encounter and just hope you get there. This does lead to some tense moments and really fun dice rolling, but feels a bit like a filler game that goes on for 90 minutes.

There is also a day track that has positions for sunrise, day, and night. Every time the counter gets to “sunrise” you will draw a card from the Planet of the Apes deck that will likely hurt you in some way. Additionally, some encounters have sunrise effects that happen if they haven’t been successfully completed when sunrise starts. Frustratingly though, encounters are replaced immediately. So you may find yourself completing an encounter just to have another with a negative sunrise effect replace it right before the counter moves.

This time of day track is meant to be the clock that keeps you progressing throughout the game and not just taking all the time in the world. But it has some fatal flaws. If all of the available encounters, there are only 3 at a time, have a sunrise effect, you can really take almost all the time you want. And during a “night” turn you are almost disincentivized from accomplishing anything because one of those painless encounters could be replaced by a harmful one before you have anything you can do about it.

And finally – losing scenes. If you are unsuccessful in the first two major scenes, you advance the Statue of Liberty marker that represents your overall time available for the game. But you continue anyway. It really feels like the game doesn’t even start until you get to the 6th scene because the stakes just don’t feel very high. Successful? Cool. Failed attempt? That is ok too! As much as you want your dice rolls to be good, it certainly feels a bit less tense for the first two-thirds of the game.

I really hoped to find a Planet of the Apes game dripping with theme that really pulls you into the world of the films. This implementation really could be any game at all—there is nothing that really evokes the movies outside of the artwork and the flavor text that you won’t bother reading.

Perhaps with some expansions to add variability and more decision points, something could be done to flesh this out into a bigger and better game. As it sits, Planet of the Apes feels like a 10 minute game that you just repeat 5 or 6 times until you reach the end.

If you get a chance to play a copy of Planet of the Apes, I’d certainly suggest giving it a try if you are a big fan of the original movie. The first play is quite fun because you don’t know exactly what to expect. But I can’t recommend picking up a copy as it only goes downhill from there.

Final Score: 2 Stars – A good looking implementation of one of my favorite movies. But the gameplay just isn’t good enough.

Hits:
• Dice rolls can be tense and interesting, especially late in the game
• Beautiful artwork

Misses:
• Day track leads to some weird interactions with completing encounters
• Not enough variability especially in the minor scenes and The Discovery.
• First few scenes are lackluster because there is no reward for success and minimal punishment for failure.