We review Pigasus, a quick spotting and memory game published by Brain Games. In Pigasus, players are quickly trying to match up two different types of animals from the cards played to the tableau. 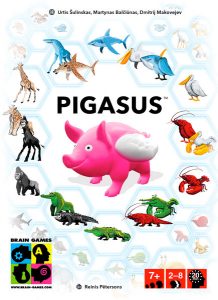 Croco-bird? Lobste-phant? Peli-shark? In Pigasus, mixed-up animals will twist your perception as you race to collect matching sets of smashed together creatures. Are those elephant legs? Lobster antennae? Is that one even mixed up at all? Pigasus will have you questioning your eyes as well as your knowledge of animal taxonomy.

Pigasus is a matching game for 2 to 8 people. It plays best with four players.

In Pigasus, players are attempting to match animals whose characteristics have been mixed up. (Example, a lobster head with a pig body and a pig with a lobster’s). The first player starts as the dealer, dealing cards from the deck, except for 16, which are left in the box. The dealer slowly builds a tableau, card by card, on the tabletop. As soon as a player spots a match they grab the pigasus and point to the matching cards. If they are correct, they collect the cards and become the dealer. If they are wrong they have to return cards equal to the number of players to the box. In the case of ties (both players grabbing the pigasus at once) the cards are split between the two players.

Play ends after the last card is revealed. To score, players add up their collected cards. The highest number of cards wins.

There’s a squeaky toy in the box, ya’ll. I feel like I need to warn you, because there’s a better-than-good chance your kid is going to see the cover, ask for the game, then play with the pigasus squeakier for the next year. Also, your dog is either going to a) hate it like mine did or b) try to steal it for its own. Caveat Emptor.

Pigasus is a fun twist on matching games that requires no memory but will present some challenges to players of all ages. It sounds simple—match the pair of mixed up animals. But oh boy, you do NOT realize just how much your brain depends on certain clues to recognize things at a glance. Sure you know the silhouette of a gorilla, but do you know it when its green with an alligator head? My second playthrough was with a group of mostly sober adults and most struggled with making matches quickly.

While the box states that the game can go to 8, numbers above 4 or 5 start to suffer primarily because of the pigasus grab mechanic. No matter the size of the table, the pig can only be within reach of a few people at a time. Additionally the cards are only about 4” square, so eventually, there will be ones that folks struggle to see well down the table.

The art style is quirky and fun. The patterns, textures, and shapes of each animal remain true to life, but each one wears a smile and giant googly style eyes. It’s hilarious to have this highly detailed rendering of a snail then notice its got a giant staring eyeball and a little grin.

While overall its a little bit of a one-trick pony, I think the way this shines is as a family game that you won’t fall asleep during (and not entirely because of the squeaky pigasus.) You’re going to be challenged almost as much as the kids to figure out most of these matches. It’s bright and colorful, but not overly busy so as to confuse the littlest of players. And simple rules mean the fun starts faster.

As a simple to learn but fun for all family game, Pigasus shines. Matching games get a new twist with funny animal mashups. While it’s not great at higher player counts, it is just right for the average family size. The simple rules in Pigasus mean not having to explain a long set of actions to kindergartners and quick playtime means no one loses interest before the end. Do yourself a favor and remove that squeakier mechanism from the toy before the kids find it though. 🙂

Misses:
• Not great over 5 players
• Squeaky toys in kids’ games—really?