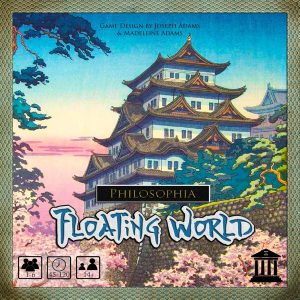 One summer in between semesters, I took a course at the community college to satisfy general education requirements for history, which I certainly was not interested in taking at my university. The course was a survey of the major countries in Asia, and it was the first time I was exposed to the religious and cultural history of the region, outside of very brief mentions in my high school. While I could rattle off the great figures of Western philosophy, the thinkers of the East were a mystery to me then, and are (admittedly) still not my sharpest subject.

Philosophia: Floating World is the sophomore offering from Cogito Ergo Meeple, and shifts that focus from the West to the East.

As with the original Philosophia, Floating World is designed as a sandbox-style game, where players can pursue their own individual paths to victory based on their own preferences and strategies. A simultaneous-action deck building game, Floating World provides players with the means and opportunity to explore and learn about the central philosophies of the Edo period of the history of Japan.

In the Draw Phase, players each draw six cards from their own deck and pass them to the next player. That player then discards one of their choice, divides the remaining cards into two groups, and passes the cards back to their owner. The players then decide which of the two groups of cards they wish to use in the round.  Each card in the draw pile contains symbols representing resources that can be collected and actions can be taken. During the Collect Phase, players pick up the resources shown on the cards they have elected to use in the round, drawing cards and taking coin, builder, and time tokens that can be used to trigger actions in the next round.

The Action Phase is where the meat of the gameplay happens in Floating World. There are a number of actions that can be taken during a round, depending on the action icons available to players on their cards. Players can also use time tokens to take additional actions on their turn that are not on their cards, by playing time tokens on their individual player boards. Possible actions include:

Since all actions occur simultaneously, there may be times when players want to take the same action. An influence track is used to determine which player gets priority, but that player can make the decision to then yield to the player with lower influence. If they do, they can maintain their position of influence, but if they exercise their priority, they drop to the bottom of the track.

As with the original Philosophia, Floating World bills itself as a “sandbox” game where players follow their own path to victory. However, unlike the original edition, Floating World does provide a little more direction from turn to turn, based on the inherent limitations on available actions due to card draws. We found that this structure gives a little more focus to the game, and prevents players new to the game from being overwhelmed by the possibilities presented by a sandbox-style game.

While seemingly holding to standard deckbuilding mechanics of buying powerful cards for your deck and getting rid of ones that do not fit your strategies, Floating World delivers a new twist on the draw with the addition of the divide-and-choose step. This simple addition adds a tremendous amount of indirect player interaction, by allowing players to have a hand in guiding their opponent’s turns.

We found the process of how to hamstring our opponents based on the arrangement of the card groups to be especially satisfying. It definitely will take a few playthroughs to be able to fully understand the timing of when to deny your opponents a particular action, but that is not a negative. We also especially liked the simultaneous action selection and performance, as it significantly speeds up playtime—this is a mechanic we would love to see in more titles overall.

Due to current circumstances, we were only able to be able to play Floating World with two players, which we found to be an enjoyable experience. However, as with the original Philosophia, it is definitely possible (and it occurred in a number of our plays) where players end up on opposite sides of the board, pursuing completely different pathways to victory at any given time. It is not an inherent weakness, but it remains a point of information if you intend on playing it solely with two players. However, the divide-and-choose still provides some interaction that prevents Floating World from devolving down into multiplayer solitaire.

We are going to waive our usual moratorium on discussing components in a preview, because the art of the cards is simply breathtaking. Featuring beautiful examples of Ukiyo-e paintings, the artwork supports a game that is absolutely saturated with theme. Combined with beautiful miniatures, Floating World provides players with a game that should be of interest to any player with even a passing curiosity in Japanese art.

Floating World is a solid sophomore offering from the designers of Philosophia, delivering a game that explores the history and philosophy of Japan in an engaging and innovative way. Holding true to the ethos of the sandbox game, Floating World adds interesting twists on traditional deckbuilding, creating an engaging and theme-heavy experience. No matter what path they choose to walk, Floating World will deliver board gamers to a higher state of mindfulness and being!

If you are interested in getting a copy of Floating World, it launches today on Kickstarter. So head over to their campaign page to become a backer, or for more information.