We review Pendulum, a real-time, worker placement game published by Stonemaier Games. In Pendulum, players are trying to score the most victory points over three turns of the sand timer. 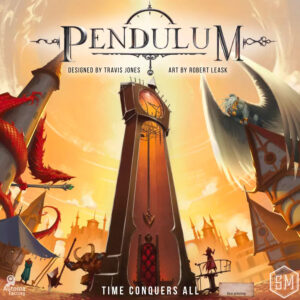 Ok, maybe it’s not that easy. My favorite games take a unique twist to the standard formula or have a theme that pulls me into an otherwise mathy process. But real-time euro games? You gotta be kidding, right? Pendulum is just that. And it’s published by Stonemaier games who have found great success in the past with games like Viticulture and Wingspan. So let’s jump in, see how it works, and find out if it belongs on your gaming table.

If you just ignore the sand timers for a minute, Pendulum is a very familiar-looking worker placement game. There are three different areas of the board where you can place your workers and some places allow multiple workers while others only allow one. Similar to Viticulture, everyone has a grande worker that can be played to an otherwise blocked space.

Generally speaking, the bottom section allows you to gain resources by activating a portion of your player board. The two upper areas help you turn those resources into movement up one of three tracks on your player board (essentially victory points). There are also worker placement spots to gain map tiles which you slot under your player board, powering up the resource gathering actions.

So how does this all happen in real-time? Each section of the board has two different rows (although the actions in each row are the same). You can only place a worker on a row that has a sand timer on it. However, you can only execute actions in rows without a sand timer. So effectively you place a worker, wait for the sand timer to run out, flip it over in the other row, and take your action. Only then can you retrieve your worker and place them somewhere else.

Each player also has a handful of cards they can use for rule-breaking actions. These may give them resources, allow them to get more work grande workers, or retrieve workers who are currently locked. After each round (which is timed to basically 3 flips of the purple timer) there is a council phase. Players compare the number of votes they earned during the round—another type of resource—and reset the council track from most to least, earning bonuses for the highest earners.

After four rounds, the game ends, and the player who has surpassed the goals for their tracks the farthest is the winner.

Let’s start with getting this out of the way—Pendulum has rules to be played as a turn-based game, removing the real-time element. Don’t do that. If you want a turn-based euro game there are thousands. Many with interesting themes, intriguing gameplay, and really thoughtful decisions. Pendulum trades thoughtfulness for a pinch of chaos. Not for good or bad necessarily, it’s a different experience. If you need to do so to step through the rules and help everyone understand that is reasonable, but it isn’t what this game is supposed to be.

So now that you have broken out the sand timers and are embracing disorder… how is it? I’d venture to say it’s not particularly good. It’s a novelty. A tchotchke you’d pick up in a tourist shop.

The real-time element is certainly different. But it doesn’t really give you a lot to consider. You still go to the black-timed areas first (which have the quickest timer) and gather resources. The purple area takes the longest but gives good rewards, so you may eventually move up there. You will trap a worker for a couple of minutes but you’ll get some points in return. Every round follows a similar pattern. Things are too chaotic to consider much in terms of strategy or trying to observe and counter the plans of any of your opponents.

Until they aren’t. Everyone’s workers are placed and just sitting with their hands in their laps until the last grain of sand drops. And then everyone grabs their workers and puts them in another spot. Worth noting here: sand timers suck and are prone to get stuck and needing a little shake. The ones here are no different and it can ruin the flow of a round.

The rulebook promises neat interactions. For example, no one has to flip the timer when it runs out of sand. If you notice but it doesn’t benefit you to flip it you can just leave it be. I’ve just never experienced that coming up. Maybe at 2 players, it could—but Pendulum plays up to 5 and you’d better believe everyone would be extremely focused on those timers.

And after a couple of plays, there isn’t really anything new to figure out. No variables in setup or goals or scoring opportunities. The game offers an advanced variant that further restricts worker placement, but this just makes it harder for everyone, not more fun or stimulating.

In its totality, Pendulum is somewhat difficult to review. On the basis of the underlying game you might experience in the turn-based mode, I’d say it’s uninspired and boring. It makes very little attempt at any theme and it amounts to dry resource conversion. It outstays its welcome and the options you have every turn are just too limited.

But the real-timeyness (yup…) is the selling point here. There are real-time games that make some sense. Galaxy Trucker has you throwing together essentially spare parts while building a ship to try and navigate in space. Captain Sonar has teams trying to find the enemy submarine and torpedo it before they are sunk themselves. Pendulum doesn’t have any real reason to be real-time though, and it doesn’t add anything other than chaos.

Final Score: 2 Stars – A dry unexciting eurogame. The real-time aspect is a novelty that doesn’t actually force the players to engage in a different way.

Hits:
• Props for trying something different.

Misses:
• Real-time stuck onto a boring game does not inspire repeated plays.
• Almost everything is the same every play—worker placement spots, scoring, etc. Very little room for experimenting with strategy.
• Sand timers get stuck. It’s just a fact of life.