We review Pax Transhumanity, a heavy euro game published by Sierra Madre Games. Pax Transhumanity is the first game in the Pax series that doesn't deal with a historical event, instead opting for a future world. 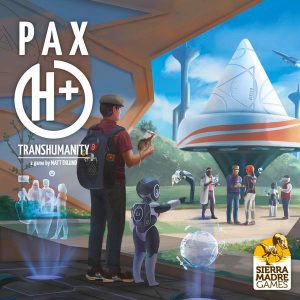 If you know anything about the Pax series of games from Sierra Madre, you know that they are heavy-weight card games that come in small boxes. The first in their line was Pax Porfiriana, released back in 2012, which covers the Mexican Revolution of 1910. Since then, five other games have followed (counting a second edition), covering themes like the European Renaissance and worldwide slavery emancipation.

In 2019, two Pax games arrived in the hands of gamers. The better-known of the two is Cole Wehrle’s Pax Pamir Second Edition, which is highly regarded across the board. The other is Matt Eklund’s Pax Transhumanity, which I am reviewing today. This is the only Pax game of the six that is not based around a historical setting, instead focusing on the “what ifs” that could be possible for the future of Earth. And no, not a zombie, environmental, or nuclear apocalypse. This is based around the advancements to solve problems in different world spheres while researching and commercializing ideas and policies.

Explaining a game of Pax Transhumanity is not easy in person, let alone in a review. Like the other Pax games, Transhumanity has a focus around a market of cards to purchase. What’s different between this game and a large amount of board games is that it does not have actual money. Instead, cubes are moved about three different sections of the player board: capital, wealth, and debt. Cubes in capital are spent first. Instead of returning those cubes to the supply like a traditional Euro, those cubes are moved down per “dollar” spent. If spending $5 and you only have four cubes in capital, then those four move down to the next box (wealth) and one of the cubes that you moved into wealth now drops down to debt. In addition to moving cubes for an action’s cost, many of the actions have you placing a cube on cards in the market. These also come from the top-most box.

Every turn, a player takes two actions. Actions all have names that match the theme, like syndicate (place a cube on a card at cost), commercialize (taking a card with your cube on it and adding it to the splay), or fundraise (consolidating cubes back to capital). All these actions have more to them than my explanation suggests, but once you understand them, they are quite basic. The actions are simple on the surface, but it’s also knowing why you would do each of them, or even if you’re eligible to complete it. It’s what one should expect from a Sierra Madre game.

Explaining how to play in a review is going to be impossible. If you want the full details, I’d suggest downloading a copy of the rulebook from Sierra Madre’s website.

How does one win a game of Pax Transhumanity? Each card when commercialized gives benefits to the player who completes it. Many of these things, like companies or solutions to problems, can provide end game points. But the amount is determined from the regime. See, when a card is commercialized, it enters the Human Progress Splay, which is a stack of cards that shows one discipline color from each card. The Cutting Edge (the bottom three cards in the splay) determines the current regime. The regime offers benefits on certain actions but also determines what will score when the game ends.

I’ll say it again, Pax Transhumanity is not an easy game to understand without having the cards and components in front of you. Even if that’s the case, a lot of the concepts won’t click until the parts are in motion. Not only are the actions and terminology a lot to digest, seeing how one is doing is the game is often difficult. New players will often feel like they’re pressing buttons and pulling levers in hopes that the action they take is a good move, or even an eligible move.

Once over this hump, the gameplay of Transhumanity sings. Most actions are as easy as moving cubes or cards around. Players are manipulating the market and the splay to best serve their scoring agenda. Some cards even have special abilities when syndicated in the market or owned by a player, so getting access to those powers can offer players massive strategic openings. A player’s two actions can drastically alter the regime, the market, and the overall state of the game.

An overarching view to describe this iteration in the Pax series is that it is a chaotic heavy Euro. By chaotic, I’m not saying that there is a ton of luck. The only luck comes from the refilling of cards in the market. The chaotic nature of Transhumanity comes from adapting to the ever-changing circumstances. A player will have in their mind what is a good next turn, only for the card they wanted to be gone and an action they planned on taking costs double the amount.

The cards and art are a great touch for the theme, but it feels quite abstract. Compared to the other Pax games where historical figures have a thematic connection to their cards, Transhumanity offers nice flavor text to explain ideas like reverse cyborgs, biophytolytic algae, or universal basic income (talk about topical), while also offering possible opposition to those ideas that actually impact gameplay. But a lot of times, a player will look straight through the theme at the cubes, discs, and cards.

Pax Transhumanity is not the easiest game to learn or understand the strategy, but once the hurdle is cleared, the game is incredibly rewarding. Every turn, the prior actions of the opposition must be considered, as they may alter the possibilities and end game scoring. While it may be another entry in the Pax series, Transhumanity feels the most like a heavy euro and could be enjoyed by those gamers. To me, Pax Transhumanity is not only my favorite Pax game, but also my favorite game released in 2019 and one of the best games I’ve played.

Final Score: 5 Stars – The perfect example of a heavy game with a quick play time, a small box, and adaptive actions.

Misses:
• First plays are opaque
• Abstract gameplay in the midst of good setting