We review the digital version of Uwe Rosenberg's two player game Patchwork for iPad and iPhone. Patchwork was a great tabletop game and we find out how the new iOS version fares on your tablets and phones. 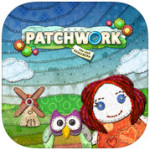 Last year, award winning game designer Uwe Rosenberg (Agricola, Caverna) brought us a highly entertaining two-player game called Patchwork. If you had told me back then that I’d enjoy playing a game about quilting, you might have gotten some skeptical looks.

However Patchwork ended up being a great, easy to learn board game that my wife and I play quite often. Recently, the developers at DigiDiced have released an iOS version of this accessible quilting game. How does it stack up to its cardboard cousin? It’s time to find out.

In Patchwork, two players square off to see who can create the best quilt from a variety of differently shaped pieces. During the game, players will be purchasing patch pieces that must be fit into a 9×9 grid. Each piece will have a Tetris-like shape, with some of those also containing buttons.

Buttons are the currency of the game and are used to purchase new patch pieces for your quilt. Along with a button cost, patches also cost time to sew. As you add pieces to your quilt, your marker will move along the game’s progression track. At certain intervals, you’ll cross a marker that gains you your income. Players will leap frog each other on the time track depending on how complex of a patch they are sewing. The player in the back of the track always gets to take a turn until he’s once again in the lead.

Once both players’ markers have reached the end of the track, final scores are calculated. Players lose 2 points for each open space on their board, and gain a point for each button they have in their possessions. Highest score wins!

As with their first game, LeHavre: The Inland Port, Digidiced has done a superb job with the game’s interface. On the game screen, players can easily see both the time board and the active player’s quilt board. With a tap of a button, they can easily swap their view from their board to their opponent’s.

Selecting a patch to add to their board is also very simple. Just choose the one you want to purchase (ones that you can afford will be glowing), and drag it to your board. The game will then zoom in onto your board to allow you to flip and rotate the patch into position. When you are selecting a patch to place, you can easily scroll through the chain of patches to see what’s coming down the line.

At the bottom of the screen is a wealth of information. Large circles show you the current amount buttons you have on hand, plus your income level. Next to that are little numbers depicting how many open spaces you have on your board, bonus points, and current victory points.

The menu can be pulled up by hitting the gear button on the bottom of the screen. This allows you to exit to the main menu, adjust sounds and effect, or send feedback to the developer. If you are playing an online game, you can also chat with your opponent.

Finally, the game screen has the usual nice touches from Digidiced. The background has several subtle animations that don’t distract you from the game, but are still visually entertaining. The background itself can be switched out in the menu. Two are included for free, with others being available as DLC (.99) if that’s your thing.

Patchwork is a great two player game for the tabletop that’s both fun to play and highly accessible. I’m happy to report that I can say the same of this digital implementation. The app is just as easy to learn and play as it was on the tabletop.

In fact, the Patchwork app also includes a guided tutorial to get you in playing right away. I love when apps do this as I rarely want to spend time reading a rulebook on a small screen. Speaking of, for some reason the app doesn’t include a copy of the rulebook, so if you want to look up something that you forgot from the tutorial, there is no way to do that. While the game is simple enough that you probably won’t ever need to, it still seems like a bit of an oversight in my opinion.

For the game play itself, Patchwork is a really well designed game. It’s one of those games that can be called easy to learn, difficult to master. Once you get the basics of the gameplay down, there is quite a bit of strategy to be mastered in the game. You have to be aware of not only which pieces you are purchasing, but also which you are leaving for your opponent. You have to think about not only the cost of the pieces, but also the time it will take you to sew them. You don’t want to jump too far ahead of your opponent on the time track when there are bunches of quick sew pieces coming up. All this combined has created a game that can be played by the casual gamer, but also draw in a hardcore gamer that normally wouldn’t be attracted to game about quilting.

For gameplay options, Patchwork offers local play via friends or via an AI with three difficulty levels. For veterans this this game, chances are you will want to play on the hard difficulty. I cruised through the easy and normal modes without any troubles. I can still beat the hard AI fairly regularly, but sometimes it can give me a run for my money.

Online play is handled through Game Center and offers asynchronous game play. Each player has 24 hours to take their turn and the app will alert you when it’s your turn to play via notifications. In practice, most players don’t take near that long to make their move and I was able to get a couple of games finished in less than an hour. While the online play was a bit buggy when Patchwork launched, couple of early patches (no pun intended) have really smoothed out the app. Kudos to Digidiced for being on top of the early gripes.

While I feel that the app is expertly developed, I do have a couple of minor gripes. First, there is no undo button in the app. As far as I’m concerned, that should almost be a requirement in any game played vs an AI. Sometimes I dragged a patch to my board, only to realize it wasn’t going to be able to fit like I expected. Right now there is no way to cancel out and send the patch back to the chain. I can do that on the tabletop, so I’m not sure why I’m stuck with my choice in the app.

Second, and this one is more minor, is that after I’ve chosen a patch to place and the app has zoomed me into my board, there is no way for me to see the chain of patches anymore (at least not past the initially visible ones). If I know I’m getting two turns in a row, I’d like to be able to look around the chain to make sure I’m leaving placement options open for my next turn.

Overall Patchwork is an excellently designed digital implementation of a great two-player board game. While the app isn’t perfect, the complaints I had were fairly minor. Digidiced has been on top of this release having already released two updates that squashed some bugs and addressed user complaints.

I would recommend Patchwork to just about anyone looking for a fun, accessible game. The app runs smoothly, and other than a few minor complaints, is will easily let you get your Patchwork fix in. Uwe Rosenberg made a fantastic game in Patchwork and Digidiced did the game justice with their great development.

If you’d like to get a copy of Patchwork for iPad and iPhone, you can pick it up for $2.99.

Hits:
• Smooth graphics and game play
• Both offline and online game modes
• Guided tutorial to teach you the game