Board Game Review By: :
Brian Biewer 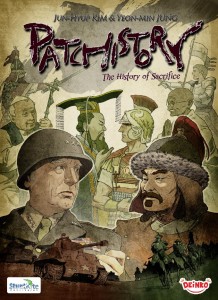 I love obtaining new board games, being a card-carrying member of the Cult of the New, but I do not like when I get games that scratch the exact same itch and bring nothing new to the table. Enter Patchistory. It is a civ building game, but you build your civilization by…. auctioning for tiles and laying them above and/or below other tiles, building a quilt-like board. This is called Patching, and it is used to improve your civilization. The premise was so unique that I HAD to try this game!

Patchistory is a civilization building game for 2-4 players that plays between 60 and 120 minutes, at least according to the game box. In reality, Patchistory lasted between 120 (2P) and 220 minutes (4P).

The object of the game is to have the most culture (victory points) by the end of the game. A game consists of three eras made up of five rounds each. Culture is obtained in a variety of ways, including generating culture from your territory, aiding or defeating your opponents, trade routes, and end of era scoring, just to name a few.

Patchistory comes with many components, most of which are average to good.

Let’s start with the good. The player screens are nice. They are wide enough to hide secret information (coins, resources, voting cubes, etc.) and have a very nice player aid that has iconography depicting the available actions during the Diplomacy and Management steps. The reference board is also laid out well…at least as well as can be expected for a board that tracks EIGHT separate categories…

The rest of the components, excluding the terrain tiles, are average and nothing more than your standard cubes, tiles, pawns, and markers. Nothing amazing, but they do their job. I did like the thick, Crown shaped 1st player marker.

Unfortunately, the terrain tiles, the most important component for this game, are not good. All of mine are warped. To make things worse, they do not Patch well together. They slide around. If you want to make Patching slightly less annoying, play the game on a felt surface. A table will have you constantly readjusting your terrain tiles. Outside of taping your tiles together once Patched, there is nothing that can combat the warped terrain tiles. (Editor’s note: Do NOT tape your terrain tiles together – this may permanently damage your components, as well as prevent you from playing the game within the game: How Many Times Can I Rearrange My Terrain?)

Due to the complexity of the game, I am only going to provide a very high level summary of the game. Feel free to check out a pdf of the official rules here.

There are three eras in the game. Each era is made up of five rounds, all of which, except the fifth, are made up of the following Phases:

The 5th Phase of each era adds the following three phases:

The game continues in this manner until the end of the 3rd era. At that point, the player with the most culture wins!

Unfortunately, my game experience was not stellar. To be honest, I was disappointed, especially given how much I was looking forward to playing the game.

I really like the idea of Patching and the different ways a territory tile can be utilized. It can be used to cover up a previously useless section of the territory. It may have two sections that are not needed, but include a Hero that will really improve the civilization; in that case, the two unwanted sections can be buried under an already placed tile, leaving only the Hero exposed as part of the civilization.

There are a few limitations to how you can Patch. Water can neither be Patched over nor under, but it CAN Patch over non-water spaces. Finally, there is a size limit to a territory. It cannot be larger than 5×5 in the first era, 6×6 in the second era, or 7×7 in the third era. Outside of these few exceptions, the manner in which territory tiles can be Patched, as well as which tiles to try to win during the Auction phase, lead to the most difficult decisions that have to be made during the game. The Patching combinations are endless, and the look of each player’s territory will be unique each and every game, leading to replay value.

I also enjoyed the unique interactions that the game encouraged between opponents. The requirement of an established trade route before negotiating with, or going to war against, other players is both thematic and a great way to encourage player interaction. Once a trade route is established, the need to balance which Diplomacy (interactions with others) and Management (Domestic Politics, as the game calls it) actions to take using the finite political points available each round is another difficult decision.

Patchistory also introduces one of my favorite mechanisms included in a civ building game: offering aid. A player can offer their opponent Aid as a Diplomacy action. Aid comes in the form of three food (used for growing or feeding the Worker population, adding Workers to trade routes, as well as other actions), coin (used during auctions) or Resources (used to construct buildings or trade routes, as well as other actions). The player offering Aid chooses the combination of food, coin, or resources offered. If accepted, the player keeps the offering, and the player providing Aid receives five culture. If rejected, nothing is exchanged, but the player that offered Aid receives two culture. It’s a brilliant concept.

Regrettably, these were the only two aspects of the game that I really liked. In my opinion, the negatives of the game outweigh the positives.

The biggest detractor is the component issues related to Patching, previously described in the Game Component section of this review. It was so bad that my wife refused to play the game again after completing our first game together. I will not spend any more time harping on this issue.

Finally, the game length is just too long. Although the box estimates 60 to 120 minutes, my 2 player games were never less than two hours. Adding players only increased this time, culminating in a 220 minute four player game. Needless to say, I only played four player once. Obviously, for those of you who do not mind playing long games, this will not be as big of an issue for you.

In case you are wondering, I feel that three players is the only playable player count for this game, assuming you do not mind investing about three hours into a game. Three players makes the auctions more unpredictable, makes end of era Voting matter more, but does not extend the game to the almost four hours that a four player game will.

I really wanted to love this game. It took a genre that I enjoy and appreciate, and tried to do something unique. Many of the ideas are great; unfortunately, the execution left a lot to be desired. I grew tired of tracking the eight categories on my reference board. I REALLY grew tired of constantly rearranging my tiles. Also, in my opinion, Patchistory just took too long. While playing this game for this review, I honestly found myself wanting to play Nations instead.

If the Patching mechanism really intrigues you, and you do not mind long games, I do not want to tell you to not play Patchistory. That being said, I would recommend trying it before buying it, if possible.

If you’d like to check out Patchistory, you can pick up a copy for about $60.

Final Score: 2.0 of 5 – Some really clever ideas that were ultimately held back by some poor components and some mechanics that added unnecessary complexity.

Hits:
• Patching is a great mechanism.
• Some unique concepts that really were great ideas.

Misses:
• Terrain tiles are of poor quality, making Patching more frustrating than fun.
• Overall the game is very fiddly.
• Does not play very with 2 players.
• Too long as a four player game.