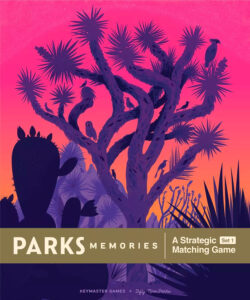 For the most part, I’ve been a fan of designers taking classic games and giving them a modern twist. Five Tribes did it with Mancala, Kingdomino did it with Dominoes, and Samurai Spirit did it with Blackjack. Today, we are going to look at Keymaster Games attempt to give us a new way to play the classic kids game Memory Match. Will this new twist on a memory matching game find a home on gamers’ tables? Let’s find out.

Parks Memories is a matching game for 2-8 players that takes about 30 minutes to play.

There are actually three different versions of Parks Memories that each feature a unique set of player abilities. For this review, we were sent the Plainswalker Edition, so we’ll focus on that. I can’t comment on how the other two play but note that they can be combined into a mega game if you are so inclined.

The goal in Parks Memories is to be the first player to have three matching sets of tiles in your area. Tiles are laid out, facedown, in a 3×3 grid. On a player’s turn, they flip over two tiles and claim one of them. If the corner icons on the two tiles (not the art) match, they can refresh the matching player power. These do things like hiding one of your chosen tiles (so your opponents can see what it is), move the hiker, or peek at other tiles.

Once done, you move the hiker to the tile you didn’t claim and flip any faceup tiles back face down. Any tile the hiker is currently on is considered blocked and can’t be used for anything. Holes in the grid are filled with tiles from the stacks above and the next player takes their turn. As soon as a player has 3 sets of matching artwork tiles in their play area, they win.

One fact I’ve come to realize is that the more I age, the worse my memory gets. I remember playing a game of Chicken Cha-Cha (a memory game) with my friend’s kid, he was probably 7-8 at the time, and he completely obliterated the adults. I’m pretty sure he was even toying with us at one point, moving backwards and then shooting forward again. Perhaps there are just too many distractions in an adult’s life to focus on memory tasks. Regardless, this means that I’m rarely drawn to memory games anymore unless they have some unique twist to up the ante.

And in Parks Memories corner, it does try and do that with its player powers. The problem is that they just don’t do enough to keep the game interesting. While they do provide a little bit of strategic advantage here and there, they aren’t really that exciting and don’t seem to provide a big enough twist to keep the rounds fresh. You’ll use one every now and then, but you aren’t really going to get excited when you refresh a power.

The other issue with Parks Memories is that the luck of the draw can have a decent effect on the outcome of the game. In classic Memory Match, all the cards are laid out at the start, so it’s all about remembering what is where. With only 9 tiles in this game, when a tile enters the grid can make a difference. Once you know where a few of the tiles are, there isn’t much point to choose them unless you already know where their match is. Halfway through the game, we were solely focusing on the new tiles that were drawn. If it was a match for you, yea point, if not, you might hate draft it if it was a match for your opponent.

Finally, as this is a Keymaster Games product, I can say that it has excellent production values. The artwork is lifted straight out of PARKS, which was already pretty fantastic. The hiker token is chunky and has a nice weight to it. The park tiles are thick punchboard so it should probably survive plays even with your kids.

While I applaud Parks Memories for trying to put a new spin on the memory matching game, it just was a miss for us. Even playing with non-gamers, most were somewhat unenthusiastic during the play. At times, it felt like we were just going through the motions. It’s gameplay really didn’t deviate enough from the classic game, and almost felt held back by the 3×3 grid.

I think Parks Memories is best served to hand it to your kids and let them play as classic memory match with all the tiles. For the rest of, if you are really looking for a memory match game, check out Memoarrr!. If you want a game with the Parks art, you’d probably just be happier playing PARKS.

Final Score: 2.5 Stars – An ok game that tries to put a new spin on the age-old memory match mechanic, but just isn’t all that interesting.

Misses:
• Player powers aren’t interesting enough to drive the game
• Luck of the draw can influence the outcome