We review Paris New Eden, a post-apocalyptic game published by Matagot. In Paris New Eden, players are trying to increase the size of their enclave by drafting survivors and constructing buildings. 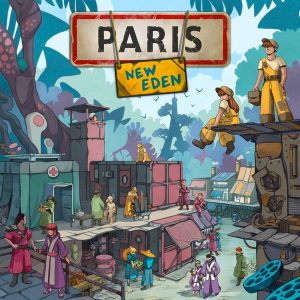 What’s this? A new post-apocalyptic board game? Oh yeah, now we’re talking. For some reason, a good post-apoc setting is one that I immediately gravitate to. From Wasteland Express Delivery Service to Fallout: The Board Game to Outlive, I’m always down to spend some time at the table with this theme.

Paris New Eden, published by Matagot, is our newest foray into the genre. The excellent visual of Paris overgrown by vegetation stand out in stark contrast to many of the drab and brown board games of this genre. But great art is never enough, so time to put on your backpacks and venture out into the city to see if Paris New Eden is worth adding to your collection.

While Paris New Eden is far from a heavy game, I’m just going to give you a high-level overview of the gameplay. If you want the full nuts and bolts, you can download a PDF of the rulebook here.

Games of Paris New Eden take place over four seasons, each of which is broken down into four phases:

Rounds start with the Gather Survivors phase. Players take turns drafting a die and using the action where the die was located. There are five different die faces, each of which corresponds to a survivor/building type. The different locations will let you gain food, gain survivor tokens, draw new end game goal cards, gain equipment, or flip an event tile face down. Once all the dice have been drafted, players move on to the acquire buildings phase.

During the Acquire Building phase, each of the five types of buildings are drafted. Players check how many survivors they have of each type (both dice and tokens they acquired this round), and the player with the majority has the first choices of buildings of that type, followed by the player with the next most, and so on. Dice used to draft a building are discarded, while tokens are added to your enclave.

Then players must resolve the event and feed their people. Both of these are ways to earn victory points. Feeding is handled based on how many farmers are in your enclave vs how many total people you have, while the event uses a combination of green/red/purple survivors and items in your enclave. The thing to remember is that there is no penalty for failing to do either of these, other than not being awarded the points for being successful. Finally, the round ends with a cleanup phase.

After four seasons, the game ends and players check their end game scoring cards. Most of these require a player to either have the majority or a minimum number of a type of survivor or equipment. There are 20+ different mission cards available. The player with the most points wins.

As I said in the intro, one of the first things that attracted me to Paris New Eden were the visuals. I think illustrator Agnès Ripoche did an excellent job of bringing a post-apocalyptic Paris to life. Instead of the usual drab wasteland seen in these types of games, you have a lush and vibrant city that’s been reclaimed by the wild vegetation. Overall, high marks the illustration and components in this one.

Moving into the gameplay, I liked how interesting the choices were with Paris New Eden. There are 5 locations on the board, and most will be drawing you towards them at some point. Getting survivor tokens from the train station helps you win draft majorities and also overcome events, but they also require food to hit those bonuses. So that makes you want to make sure to grab those farmer dice to win the farms, however, farmers only are useful in feeding, not overcoming events or accomplishing most all secret missions. It’s an interesting balancing act of what die to take not only because you want the icon, but also to use the action space

When it comes to card drafting, some cards are definitely better than others. There are survivors called “slackers” that literally do nothing but eat food. Sometimes a building will come up with 1 worker and 3 slackers, so you don’t want to be stuck with that one. And then there are the artificer buildings that all have special powers, some of which might fit your strategy better than others. So draft order is important (the last player usually doesn’t even get a building). Interestingly, the opposite side of the wild worker token from the train station has a slacker. So while that wild token will help you get that building you really want, he becomes useless the rest of the game.

If there is an area where Paris New Eden struggles it’s with the randomness. You will be drawing your secret missions from a deck and it’s entirely possible to get ones that work opposite each other (I.e.: have the most slackers and the fewest slackers). And then, there are the dice. Sometimes you really need farmers to feed your people, but only one shows up on the dice that round. It’s happened and it sucks. Unless the train station has a few tokens to help you out, you are kind of hosed.

The other thing I should point out is that there is an item, the baseball bat, that lets you win ties for the draft. It’s a pretty powerful item that’s available in the same location you gain items. This one feels really strong and was almost always quickly drafted each round since dice majorities were always so tight. This is especially true in a two-player game. I wish they would have found a better mechanic for breaking ties.

Overall I liked Paris New Eden. It’s always good in a game when the decisions on which die to draft or what actions to take aren’t always obvious. You might really want draft Artificer die, but he’s not in the location with the action you want to use. So you have to weigh getting the die you want with taking the actions you need. It’s a fun little balancing act that only gets more interesting as the player count goes up and competition becomes more fierce.

Paris New Eden makes a great “next step” game. If you’ve played through a bunch of gateway games, this is one is light enough to not be intimidating, but has enough depth to keep you engaged throughout its playtime.

Misses:
• Not much you can do to mitigate randomness
• Baseball bat feels pretty powerful