We review Pacific Go, an abstract war game published by Big Cat Games. In this asymmetrical, two-player war game one side takes control of the Japanese fleet while the other controls the allies. 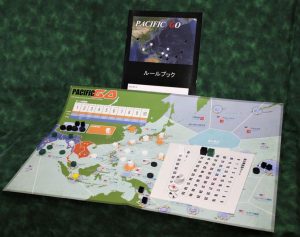 It is almost 80 years after Pearl Harbor. The events of that terrible day create a singular story of conflict that has few rivals in history. Very few conflicts can be said to be truly global the way the First and Second World Wars were. The entire story has been the subject of countless documentaries and retellings in various forms.

So this next game’s feats are twofold. First and foremost, the strategy plays like a game of Go’s focus on territory control, delivering the game name: Pacific Go. And second, it is unexpected to see a game about Japan’s conquest of the Pacific from a Japanese designer.

But wargame fans should rejoice. This two player semi-abstract takes about 60-90 minutes to play. Read on to see if it honors it’s designer.

Many wargames share a standard structure: move, fight, and produce over a series of rounds. Pacific Go is no exception. Every round features the following phases:

The real meat of the game is in how the asymmetry between the Allied and Japanese forces is illustrated through game mechanisms. With relatively simple rules, Pacific Go simulates the oil embargo on Japan, the pace of expansion across the ocean, and win conditions that in a strategic sense bring everything together.

The game features one fluid currency to manage, simply called “resources”. They are tracked on a simple scale, one for the Japanese and one for the Allies (British and American) resources. These are used to fund battles, unit movements, and new units throughout the game.

After both players pass for movement, battles occur. The attacker must pay at least 1 resource unit to roll 1 die in combat. If they have more units, they can pay up to the number of units they have for the additional dice. Each die hits on a roll of 1. If they choose, they may also pay additional resources (up to 3 per die) to increase the number needed or less to hit. Combat hits from the defender and attacker are subtracted (higher from the lower) and whoever had the higher number wins. The loser retreats and loses units equal to the difference in hits.

The next few phases see players acquire more resources, again with different rules for the Allies from the Japanese. The Allies receive a fixed amount that slowly increases over the span of the conflict. The Japanese must rely on production territories conquered. It’s a good thing too, because just after this, each side can purchase new units to be deployed in India (Great Britain), off the coast of Honshu (Japan) or Hawaii (USA). Also during these phases, supply lines are checked. If a player has units cut off in their supply, movement expenses increase.

The main victory condition is victory points for territories held. The Allies player needs 10 more than the Japanese player to claim victory. An alternate victory condition for Japan is to cut off aid to Australia from Hawaii and either conquer Hawaii or Townsville in Queensland, Australia.

As simplistic as all this sounds, there is a lot going on in Pacific Go. Although the rules are six and a half pages, they’re dense with examples and regulations for situations and areas of the map which might work slightly differently. This is just what anyone playing a grander wargame would expect. The choices to make are thematic and economic, just as they are strategic and that’s pretty amazing that it comes in a small package.

However, the main thing holding this title back is the not so great translation of the rules. At a first read-through, the intent of the rules is clear and the overall game starts to come into picture. As players then take to the poster-map field, specific operations of situations start to reveal some questions that the plain-speaking and awkward English sometimes doesn’t cover. This reviewer sincerely recommends taking the original Japanese rules to both a rulebook editor AND a Japanese English translator who has worked on game rules before.

Between some typical rules like combat resolution, supply lines, alternate win conditions, there are a ton of good ideas in this small game which, unfortunately, feels like a prototype. What it needs to get past this is just a bit of polish and TLC. Wood cubes and discs? No problem. Poster map. Ok. I know that wargamers are used to spartan efforts, but the rules and tracking sheets still come across as a garage-startup production. Pacific Go would benefit more from graphically designed player boards incorporating a round/phase reference, rules notes, and a map legend. That, along with clearer rules, would really invite the attention of more gamers.

Pacific Go was difficult to play, and it shouldn’t be. It was deep and interesting where it wasn’t expected to be. The listed price ($28) is reasonable if the rules were easier to grok and the components better designed. As it is, it needs a development boost to allow more people to see this unpolished gem and not feel overcharged.

Final Score: 3 stars – Those who like putting a lot of effort into grappling with difficult rulebooks will find the exceptional abstract wargame described.

Misses:
• Terrible rules translation and presentation
• With the rules as is, not the best first experience of a wargame