Home Game Reviews On Tour Review
Review of: On Tour

We review On Tour, a music themed roll and write board game published by Board Game Tables. In On Tour, players are trying to take their band on tour through the most states possible. 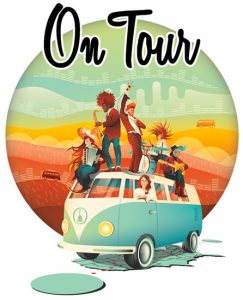 Being in a band is a pretty glamorous job. Travel the world, perform to sold out shows, and have adoring fans screaming just to get a picture with you. I mean, fame has to be pretty sweet. But it’s not all fun and parties, someone must work out the logistics of this tour!

Today we are looking at On Tour, a route-building roll and write that has players trying to plan the perfect tour route for them and their bandmates. It plays 1-4 players (or really an unlimited number with additional boards/copies) in about 30 minutes.

Each round a player will roll two ten-sided dice and reveal three location cards. The location cards show both a region—either north/south or east/west/central—and a particular state, indicating where you must write numbers this round. The numbers you write are determined by the result of the roll; if the roll is a 2 and a 8 you must write 28 and 82.

There are two possible special cases—the dice rolling doubles or the location cards all showing the same region. In these cases, instead of writing a number on your board, you draw a star in one of the regions indicated on the location cards. Just like before, if you put the star in the exact state, you’ll circle it as well.

The game continues until all states on the map have a number or star written in them. Players will then create a route along the map they’ve created, attempting to visit at many states as possible. You can start and end anywhere you’d like, but you can only move to adjacent states that have a number that is equal or higher than the state you are leaving.

Players score a point for each state they visited and a bonus point for every circled state on their tour. The player with the most points wins.

First off, the music theme, even if it doesn’t much effect the gameplay, is perfect. Each player board is a different genre of music, with slightly different artwork, and has an area to name your band in the corner. Roll and write games aren’t theme driven, but On Tour does it’s best to give you something here to really make you connect with why you are putting numbers in all these circles.

Everyone plays On Tour simultaneously, so there is very little downtime in the game. Other than the aforementioned artwork differences, everyone has the exact same setup and, in theory, can build the exact same routes. While this may sound like a negative, it definitely is not. The luck of the draw affects everyone the same way, making On Tour part-puzzle and part-press-your-luck.

The press-your-luck aspect is a little bit below the surface of what is a simple to explain game. You can teach anyone how to play in 5 minutes, but the decision-making points can be more complicated than you might think. This is mostly thanks to the extra points you can earn by writing a number in the exact state on the card rather than just anywhere in the region. You will often find yourself deciding between a safe bet to make sure your route is connected and trying to eek out an extra point or two, but making the success of the whole thing hinges upon getting the die rolls you need later in the game.

The decisions here can be difficult, and with players who find themselves prone to over-analyzing (AP), it could drag this quick roll and write out to the point where it feels like you’re deep into the 3rd encore of the opening act. With some experience and a mindfulness of others, this isn’t a major downside but keep it in mind if AP is something you find prevalent in your game group.

Visiting every state is just an impossibility. You’ll have to pick areas of the map to avoid entirely, giving you places to dump numbers that just don’t fit into the tour you are trying to plan. With careful study of the map though, you can try to keep as many options as possible open, allowing you to wind up and down the coast, through the south, back through the Midwest…the possible routes are nearly endless.

One final note, the production here is amazing. The maps aren’t just dry-erase boards. They look and feel like fancy restaurant menus. The artwork on the cards and box is bright and gives off a relaxed Beach Boys-type vibe. The downside here is only four of these cool menu-like-boards are included in the game. If you want to play with more players, you can buy additional boards for a nominal fee (about $4 each) and up to 12 will fit in the box.

Without a doubt, I was predisposed to liking On Tour. Music themed. Roll and write. Route building. All of these things hit me right in the wallet. But I don’t like On Tour, I love it.

The recent trend for roll and writes seems to be adding complexity. We are moving past the world of Qwinto and Qwixx to games like That’s Pretty Clever and Welcome To… that have dozens of pages of rules to explain how everything works. On Tour manages to create tough decisions and engaging gameplay without adding a lot of rules overhead. Not to mention the presentation in this box is unrivaled by any other roll and write on the market.

Hits:
• Route building decisions and press-your-luck elements lead to tough choices.
• Beautiful artwork and presentation.
• Can be taught in 5 minutes to gamers of all experience levels.

Misses:
• Only four player boards mean you’ll likely want to order more for a bigger game night.
• The route-building experience is similar from game to game.