We review Nuked: Warmonger, a great and much needed expansion to the friend ruining card game where players gathering supplies and then trying to obtain enough settlers to win. Warmonger adds fun new card content such as Militia, Bombers, and Robot Moms. 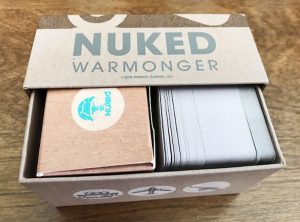 A sign of a great expansion is that it improves the base game and that it’s essential that you never want to play without it again. Great expansions like Lords of Waterdeep: Scoundrels of Skullport or Cry Havoc: Aftermath are ones come to mind that my group and I always use with the base game. Both expansions add great new mechanics, more content, and improve the overall gameplay. Both are essential and we won’t play the base game without them.

Let’s take a look at what Nuked: Warmonger adds to the base game and if it’s a great and essential expansion like the ones noted above.

The Warmonger expansion increases player options with new cards and adds new rules for these cards. The following are Warmonger new card additions:

Militia: Settlers in play can be discarded for militia cards from your hand. You can spend the militia to use them offensively and destroy enemy settlers that are not in bunkers.

Bomber: this card can be played onto an enemy settlement. On the following turn, you may spend supplies and the bomber can destroy enemy settlers or militia. You may also move the Bomber to another enemy settlement, but that ends your turn.

Anti-Aircraft: the AA card is used to destroy an enemy bomber.

Robot Mother: this card is played to your settlement and on the following turn you may spend supplies to steal robot settlers or militia from enemy settlements.

EMP & Backup: If the EMP card is played – all robot settlers, militia, and robot mothers for all players, including yours, are destroyed.

Radar: this card can be played onto an enemy settlement to look at an opponent’s hand.

I think most gamers want an expansion to add variety to the game and ideally becomes an essential piece for future gameplay. Nuked: Warmonger fits the bill for both. It also doesn’t add new complexity where you feel like you’re learning a new game. Warmonger’s addition makes Nuked simply better and gives you a reason to bring this one back to the table. I really liked Warmonger and I don’t think I’ll ever play Nuked without this expansion again.

Warmonger gives you new ways to mess with opponents and not simply reduce their settlements to ash. I love that no more Nuke cards were added to the game, those are very powerful, but now you have options like the militia cards to attack and reduce opponent’s settlers. I also enjoyed that you can transform your settlers into weapons – it’s a cool concept and while you are sacrificing possible VP, you’re also adding to your arsenal to possibly reduce enemy VP as well.

The concept of the bomber again adds a weapon that will help reduce enemy VP. I like the fact that you must spend supplies to destroy enemy settlers and militia. It makes sense that you need to sacrifice something to keep those planes in the air and stocked of ammo to rein terror on your enemies. The AA is a nice counter and adds a good balance to the game as well.

The robot mother card was also a good addition. This digital Piped Piper has a fun mechanic by spending supplies it can steal robot settlers or militia of equal or lesser value. Nukes and bombers may be able to rain terror down, but now you can peacefully steal from other players, which is hilarious to me. Yes, the EMP will destroy your robot empire so keep a lookout for those backup cards.

I know some gamers will not care about this but I have limited space on my shelves and I’m always looking to find more. This expansion comes with a larger box, and in an unexpected twist, the base game fits in the larger, sturdier Warmonger box. Yes, the game is small but I really like that both fit in the same box and that I don’t need to remove inserts or re-organize all the cards to fit.

The only thing that I found frustrating is that the cards are still on the small side like the base game. Shuffling and holding them is awkward at best because I have stubby digits. I had to resort to using a card holder, which is what I recommend for most with sausage fingers. The card holder solves most of my problems but it doesn’t help me shuffle.

I think one way to rate the success of an expansion is if you’d never play the base game without it again. For Nuked fans, Warmonger is a no-brainer. The additional offensive options like militia, bomber, and one peaceful option the robot mother are excellent new editions. Also, to save on shelf space, the expansion box pulls a reverse and can hold the base game, with room for maybe more forthcoming content.

I still have sausage fingers and these little cards are hard for me to shuffle and at times handle. I know it’s more my issue but I just want to make others aware if they have the same issue.

Nuked: Warmonger is a must buy and it bumps up my original Nuked rating up by 1 star giving the base and expansion an overall 3.5 now.

Misses:
• Cards are still too small