While the inaugural PAX Unplugged was pretty thin in the new release department, we did get a chance to check out some upcoming games. If you are looking for our thoughts on the convention overall, check out yesterday’s recap article. 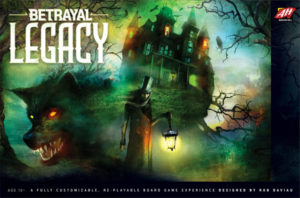 The big news announced at the convention was the Betrayal at House on the Hill is becoming a legacy game. I had a chance to sit down and chat about it briefly with game designer Rob Daviau and was able to pry a little bit of information about the game (spoiler free of course).

Betrayal Legacy is due out in October of 2018 and will support 3-5 players. The campaign is going to focus on the history of the house, which will essentially be the “main character” of the story. That story will be a 13 chapter campaign that, once finished, will leave the game infinitely playable going forward.

The campaign will also span over years and generations, as players will choose a character, and eventually play the descendants of those characters as the house continues to age and change. Word is that house will start off small and grow as the campaign progresses. Hey, who doesn’t like renovations?

The campaign will feature a branching storyline, so your game won’t always match up with other groups. There are actually 50 haunts in total and players won’t even see every haunt in their campaign (those can be played after the campaign).

While the core game play will be familiar to Betrayal players, there will be some changes as they adapt it to the legacy format. Players can expect the early games of the campaign to be around 30 minutes, with the end games approaching about 1hour 15 mins or so.

Greater than Games was actually one of the few companies that had a new release at the show and it was their new role playing game. This starter set is meant to ease players into their new RPG system, and provides everything needed for a full campaign.

Even if you’ve never played an RPG before, the nice thing is that the game not only walks you through the steps of being a player and GM, but the ruleset is not overly complex. I know jumping into a fantasy RPG can be intimidating when you have a 100+ page book to read before you can even get started. So I appreciate what they did with the Sentinels RPG starter set. They give you the basics and let you have at it.

There are 5 pre-made characters featuring the iconic Freedom Five Sentinels of the Multiverse heroes (Legacy, Wraith, Tachyon, Bunker, and Absolute Zero). For the GM, they have a few pages to read, and then have 6 pre-made adventures they can run the players through. The goal of this starter set is to both teach the system to new players and get them excited for the Sentinels Comic core book due out next year.

While we didn’t get a chance to play this one, I’m always excited to see a new RPG for something other than a fantasy setting. I feel like the super hero genre is one that’s somewhat under used in RPGs, so I really hope to try this one someday. 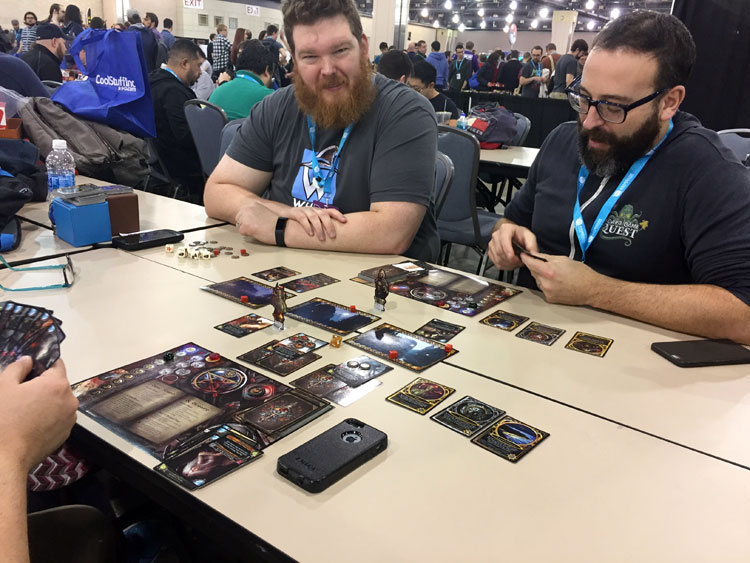 One of the Holy Grails of gaming these days is to capture the magic (forgive me) of Magic: The Gathering in a standalone, expandable, non-collectable game. Working in some deck customization that won’t scare off casual gamers is a tall order as well. White Wizard Games seems to have set their sights on this with the upcoming Sorcerers card game (currently on Kickstarter). It’s got dark, demonic flavor wrapping a tight tactical game with strategy coming in from the choice of mini-decks which build upon each other. There’s plenty to digest for many game nights, but it doesn’t take so much effort that it would take time outside of the game just to get prepared for playing.

Sorcerer provides a two-player card battling game that provides a fair amount of depth in a small package. By choosing a character, a specialty and a place of origin, players can create over 60 deck combinations for play. Taking place in an alternate Victorian-era London where dark wizards vie for power, players seek to destroy 2 of 3 city areas by deploying their minions and dealing damage to their enemies and to the city.

Dice are used to decide damage, with rerolls deployed by both attacker and defender to determine the result. We found the addition of this mechanic to the game to be a refreshing change from standard attack/defense interactions in similar games. Each deck portion has its own theme and unique set of powers and the artwork is simply beautiful. The action selections and turn structure provide gameplay that is easy to engage with quickly, making Sorcerer easy to hit the table with new players.

Overall, it plays fast and gives just the right feel of a tight duel. Testing out the different combinations of decks should provide enough fun for several evenings. Oh, and of course… expansion decks are on the way, thanks to how well the Kickstarter is doing.

OK, I’ll admit it. When Catan was first announced for VR, I was thoroughly unimpressed.  Of all the board games to turn into a virtual reality experience, why Catan? Why not some thematic board game like Imperial Assault or Descent, where you can get on the ground level with your fellow warriors. 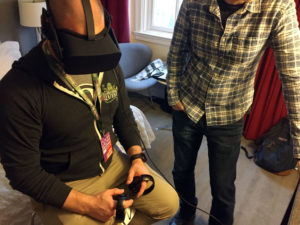 Turns out, I just didn’t get the vision that developer Experiment 7 was going for. They weren’t trying to drop you into a board game as a piece, they are creating a virtual tabletop. Think of this as the next evolution of Tabletopia of Tabletop Simulator.

Meeting with Geoffrey Zatkin and Demetri Detsaridis from Experiment 7, they explained what their goal was for Catan VR. As ever gamer knows, it can be really hard to get people to a game night. Kids, work, or just life can often get in the way. So why not create an experience where you can feel like you are sitting in the same room as your friends, even when you are not. They wanted to create a virtual game space where you can fully immerse yourself.

We got to try and beta version of Catan VR and it was pretty impressive, even in its current state. The game board sit in front of you, beautifully rendered with even little animations. Birds flew by, sheep grazed in their pastures, and even a little whirlwind fluttered around the desert. 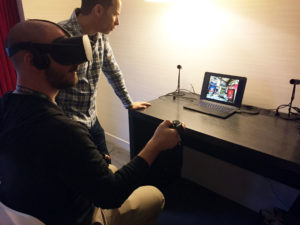 Looking around the room, there are 3 other chairs for your opponents avatars (portraits in the demo), but on the walls were paintings, weapons, and other thematic elements. Even looking out the large window is the familiar sunset from the box cover.

While I know that many gamers have long since moved on from Catan, there is no denying that the brand is still very popular, especially among new comers to the hobby. So as a choice, it makes sense. A VR table space probably is going to have a lot of gateway appeal and Catan has the brand recognition.

I’ll admit that we were all impressed with the quality and scope of the demo. If this is the next evolution in digital tabletop gaming, sign me up! If you want to see more, you can check out the VR demo here.

The Recokoners: The Board Game

If you were going to bank on a Brandon Sanderson book series to sell games, you are probably going to look at his insanely popular Mistborn series. However, if you aren’t aware of his lesser known Reckoners trilogy, you are doing yourself a disservice. The novels are set in a post-apocalyptic future where super-powered beings, known as Epics, rule the world in city-states. The Reckoners are a group of everyday humans who are the only ones fighting back against these overlords. Seriously though, check out the series, it’s awesome.

Navuoo Games, best known for their excellent Stockpile board game, has acquired The Reckoners license and is bring it to our tabletops next year. In this cooperative board game, players will control one of The Reckoners from the books, each with their own unique focus. The goal of the game is for the players to take down Steelheart, an ultra-powerful Epic from the first book, before he destroys too many human bystanders.

We got to play the prototype in its current form and I really enjoyed it. The Reckoners board game is a dice rolling, action selection game. Each turn, players will roll their dice (up to 2 rerolls) and use the symbols for various actions around the city. Each die face has a unique symbol, all of which are useful, so there are no wasted turns.

Players usually will have to research an epic first to find their weakness (abstract in the game) before they can then damage them directly. Killing a lesser epic will provide rewards in the form of research on Steelheart’s weakness, money for upgrades, or points to contain epics (lower the damage they do).

While The Reckoners wasn’t a deeply thematic experience, I did find it to be very accessible. I was the only one of our group of six who has read the books and they all were able to jump in and enjoy themselves. The prototype art and minis look great, and the gameplay definitely required a lot of coordination from the players.

We played a 6 player game, which is the top of the player count. Navouu Games said they wouldn’t recommend that for your first game, and I agreed. It got pretty chaotic at times as we were all trying to learn strategies at the same time. I think the sweet spot may lay in the 3-4 player range, but I won’t know until I get play it again (hopefully soon).

Overall though I really enjoyed The Reckoners board game and they can count me as a backer for their upcoming Kickstarter (tentatively scheduled for January 2018).