One of the highlights of going to Gen Con every year is being able to play and acquire the newest releases. Every year I spend time before the convention hunting for what each company will be releasing at the show. Many times a company will only have a limited, pre-release quantity of a game so it’s a good idea to know what the hot new releases will be ahead of time.

With that goal in mind, I’ve contacted some of the major publishers in hopes of finding out what they will be releasing at Gen Con this year. I’ll post information here as I acquire it from the publishers or other sources. I’ll update this list as I receive more information so check back frequently.

If you are a publisher and want to add your games to the list, let me know the contact page and I’ll get you added to the list.

Arcane Wonders
Confirmed Release:
Edit: Arcane Wonders has pushed back the release of the Druid vs Necromancer expansion until Fall 2013. They will have Mage Wars Dice Towers and Arena Mats in limited quantities for sale.

Ares Games
Confirmed Release: Ares Games will be releasing the new version of Inkognito at Gen Con. They will also have demos of Sails of Glory (releasing later in August) and Galaxy Defenders (Releasing in September).

Asmodee Games
Potential Release: Spyrium and Augustus. Asmodee is hoping to see those two on time with other titles already sold in Europe but didn’t reach USA yet.
Update 6/23/13: According to their twitter feed, Asmodee will be releasing Dungeon Twister Card Game at Gen Con.

Asmadi Games
Confirmed Release: Research uncovers that Asmadi Games will be selling Sanitarium: Foyer expansion at Gen Con. They will also be demoing Consequential and Impulse at the convention, but not selling.

Bezier Games
Confirmed Releases: Bezier Games will be selling both You Suck: A tick-taking game, and Ultimate Werewolf: Inquisition. These games were actually released at Origins but sold out in the first day. They will be for sale again at Gen Con

Also, they will be demoing the Suburbia Expansion at Gen Con and offering it for pre-order at a discount.

Czech Games
No Releases: Czech Games is not planning to release new games at Gen Con. They will target their release dates to Essen Spiel Fair.

Days of Wonder
No Releases: Days of Wonder will be demoing their newest game Relic Runners ahead of its September release. They have clarified with us that they won’t be selling it at Gen Con.

Eagle and Gryphon Games
Confirmed Releases:  Eagle Games has confirmed that the following games will be be released at Gen Con: Francis Drake; Wizard’s Brew; Karesansui (aka Rocks); Railways Express; Railways of North America; and Railways of Great Britain

Fantasy Flight Games
No Information: Still waiting for a response to our inquiry.

Fireside Games
Confirmed Release: Fireside Games will have a limited number of copies of Dead Panic for sale available at Gen Con.

Floodgate Games
Confirmed Release: They will be releasing: Legacy: Forbidden Machines. This is the the first expansion to Legacy: Gears of Time. Gen Con booth #161

Flying Frog
No Information: Still waiting for a response to our inquiry.

Game Salute
Confirmed Release: Game Salute will be releases Morels, Mage Tower, Pixel Lincoln Deck Building Game, Dungeon Heroes, Serpent Stones, and Corporate America at Gen Con.
They are also hoping to have copies of Princess Bride: Prepare to Die!, Nothing Personal, and Alien Frontiers – 4th printing depending on availability from the printer.

Golden Egg Games
Confirmed Release: They will have limited quantities of Alliances for sale at Gen Con. They will also be demoing City Council, but not selling it.

Greater Than Games
New Releases Planned: New releases are intended, but nothing is confirmed at this time.

Iello
Confirmed Release: They will be releasing: The Phantom Society and Biblios at Gen Con. Also, they will have the newly released Titanium Wars, Mythic Battles: Expansion 1, and Innovation: Echoes of the Past (with a much needed card redesign) for sale at Gen Con.

Indie Boards and Cards
No Information: Still waiting for a response to our inquiry.

Level 99 Games
Confirmed Release: Level 99 Games will be releasing thier game 7-Card Slugfest, Disc Duels and Pixel Tactics 2 at Gen Con. They will also be demoing BattleCON: Devastation of Indines, but not selling.

Mayfair Games
Confirmed Release: Mayfair has confirmed that The Fall of Pompeii ($35, re-release of a perennial best seller), Asgard’ s Chosen ($42, elements of deck building, area control and a geomorphic board) and Catan Scenarios: Helpers of Catan ($5, Catan expansion, simple and straight forward.) will be released at Gen Con. They also hinted to us about a surprise product, which will be announced as soon as the approval process is complete.

Update: Hegemonic may slip past the convention. Minions Games’ new foam dice should be available though.

Plaid Hat Games
Demos Planned, Releases Sill To Be Determined: Plaid Hat Games will be showing BioShock Infinite: The Siege of Columbia, Summoner Wars Second Summoners for the Fallen Kingdom and Vanguards, and Mice and Mystics the Heart of Glorm.  Whether any of those will be for sale there or not is still up in the air.

Privateer Press
Confirmed Releases: Privateer Press will have a number of  exclusives and pre-release games, but they aren’t releasing that information until the day of the convention.

Queen Games
No Information: Still waiting for a response to our inquiry.

Slugfest Games
No Information: Still waiting for a response to our inquiry.

Upper Deck
No Information: Still waiting for a response to our inquiry.

Wizards of the Coast
No Information: Still waiting for a response to our inquiry. 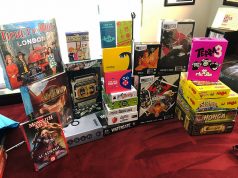 A Convention Haul Look Back 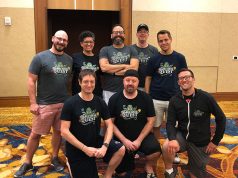 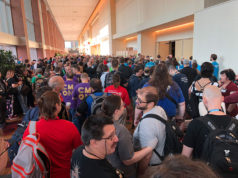