We review the Neuroshima Hex app for iPad and iPhone. Developer Big Daddy Creations has taken this beloved Portal Games title and adapted it to play on your favorite iOS device. 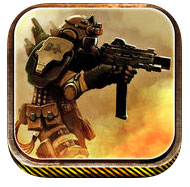 In 2015 I got my first chance to play the Neuroshima Hex board game. It’s a game that’s been around for many years, yet I’ve never got around to trying it. I’m usually not one for abstract games, so it wasn’t too high on my radar to being with.

However I kept hearing rumblings about how good this decade old game was, so I figured why not give it a shot. You can read my full thoughts in my review here, but the short of it was I loved it! I have since bought just about every expansion available for the game and it has turned into one of those games that I’m always willing to play.

After playing the game quite a number of times, I was elated to discover that there was already an iOS app available for Neuroshima Hex. Developer Big Daddy Creations has taken this Portal Games staple and brought it to our tablets and phones. So the only remaining question is if it’s as much fun to play on our tablets as it is on our tables. It’s time to find out.

The review I linked to above is perfect if you want to know all about Neuroshima Hex, so I’d start there if you’d like an in-depth analysis on the game. But the quick of it is that Neuroshima Hex is an abstract, tactical board game for 2-4 players. Each player controls one of the games 4 unique factions (Humans, Mutants, Robots, or Gangs). The game is played on a hexagonal board with the object being to reduce your opponent’s HQ to zero points.

Each turn, a player draws three tiles from their stack, discards one and may then play the other two onto the game board. Tiles come in the form of units (both ranged and melee), Modules (boosts other units), or Instants (one time use tiles). Once someone plays a battle tile (or the board fills up), units will attack in descending initiative order. The games combat system is delightfully simple and easy to understand. Be the last player with an HQ still on the board (or have the most points left when players run out of tiles) and you win!

The Neuroshima Hex app has been out for a while now, but the app has recently been given a facelift to align it with the look of the 3rd edition of the tabletop game. So everything you see in the app should look very familiar if you’ve played the board game.

Once you are in the game, the screen is dominated by the game board and its post-apocalyptic background. The board is made up of 19 individual hexes, each of which can hold one unit, module, or HQ.

On the left side of the board (or the bottom of your screen on the iPhone) is the game’s only panel. When it’s your turn, this panel will slide out and it will show you the three tiles you currently have to choose from. Each will wiggle with a little “X” to allow you to choose which one you want to discard. If you want to discard more than one tile, you can press and hold a tile to activate the discard mode again (much like when you want to delete an app on your phone).

The panel also lets you enter an information mode by pressing the “i” button. This will allow you to tap any tile to get the full rules for its special abilities. This was the only part that I’d like to see done a little better. It’s a bit clunky to have to constantly enter and exit the info mode, especially for new players. I would have rather seen functionality where you just press and hold on a tile to bring up the info window (similar to how Le Havre: The Inland Port approached it).

At the end of the game, an info screen will display showing a player’s points for the game. The points are largely irrelevant other than for adding to your games center score.

If you read my review of the Neuroshima Hex board game (or even the intro paragraph above), then it’s quite obvious that I love this game. So how does this digital version play? Pretty spectacularly I must say. Big Daddy Creations did an absolute fantastic job building this app.

Other than a super minor quibble on the interface (mentioned above), I’m hard pressed to find any complaints with the Neuroshima Hex app. It runs smoothly, offers online and offline play, and seems to be bug free. The app will let you play 2, 3 or 4 player games, either against the AI or other players.

Speaking of the AI, it comes on three levels, Easy, Medium, or Hard. Easy is a great level to use to learn the game’s strategy. New players can expect to lose pretty regularly, even on the easy setting, until they get their heads wrapped around the strategy of the game. After that, expect to be playing on medium or hard. Even after almost 200 games on my iPad and iPhone (yes, that many), the hard AI can still give me a run for my money.

I was also happy that the app included an undo button (which doesn’t appear in multiplayer), which helped make learning the game much easier. I’m a firm believer that every app should have an undo button, especially when you are playing solo, as it’s way too easy to accidentally put something in the wrong spot on these small screens.

There is actually one area where the app beats out the tabletop version. When it comes to combat resolution, the app clearly wins this battle. Resolving combat in the board game is not actually as bad as I thought it, especially after you get a few games under your belt. However the app makes combat a BREEZE. It goes through each initiative order and highlights each tile as it takes its actions. The app even gives you the option of skipping the battle and just seeing the after-effects. This allows players to speed through games if they don’t want to watch each tile attack.

One thing the game really could use is an interactive tutorial. I really like when apps walk you through a few turns of the game and then set you loose. While the app does have a brief tutorial that shows you the basics of the game (and also a rulebook), new players might easily feel overwhelmed.

The good news is that if you’ve played the tabletop version before you should be able to jump right in with the app and get a quick fix in of this outstanding game. You should expect to be playing most of your games vs the AI (or Pass and Play) as online play is fairly sparse.

Finally, I will say that I wish they’d update the app to allow players to use the variant, multiplayer rules found in Neuroshima Hex 3.0. I much prefer those rules when playing with 3-4 players and, unfortunately, the app only allows for standard play.

Neuroshima Hex for iOS is a very well designed app that expertly recreates the tabletop experience on your iPad or iPhone. The game plays smoothly, has easy access to the rules for new players, and offers three levels of play vs the AI. All this combined helps to make Neuroshima Hex an iOS app that’s a must own for any board gamer. I’ve had a TON of fun to playing this wildly entertaining game. I’m closing in on close to 200 games played (according to the game center stats) and have already bought all the expansions the app has to offer.

If you have been looking to check out Neuroshima Hex, but didn’t want to spend the money on the cardboard version, this app is perfect for getting your feet wet and deciding if you want to go all in on the board game.

If you are already a fan of Neusoshima Hex (and why wouldn’t you be), then buying this one should be a no-brainer. It’s well designed, already has many of the expansion armies available, and will provide you with hours of entertainment. Download this one today!

If you’d like to get a copy of Neuroshima Hex, it’s available as a universal app for $4.99.

Final Score: 5 Stars – An almost perfect adaptation of a great tabletop game to the digital realm. A must have for fans of the game.

Misses:
• Tutorial could be better
• No 3.0 variant rules