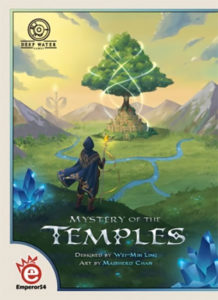 Hobby board gamers are quick to categorize games as either euro games or thematic games. Many believe it’s not possible for games with a theme to come out of Europe. Regardless, there is a growing number of games being designed and published in Asia that offer a different viewpoint—often looking and feeling a lot like traditional European designs but with unique elements that clearly break that mold.

Today we are looking at Mystery of the Temples from Taiwanese designer Wei-Min Ling and published in the United States by Deep Water Games. It is a rondel-based resource management game for 2-4 players and takes about 30 minutes to play.

In Mystery of the Temples, players are tasked with breaking ancient curses on each of the five temples. This is accomplished by gathering crystals in various colors and using them, following the pattern on the temple card, to break a curse.

When you get a crystal, you immediately place it on any open space on your player board. There are 12 spaces laid out in a lattice-looking pattern. Placement here is key because when it comes time to break a curse you have to follow the pattern on the temple in order. So you can’t just jump around anywhere on your player board and use any crystals you have—you must move from one crystal to a connected crystal.

There are player specific powers that can be drafted to begin the game that gives everyone a bit of a rule breaking ability. Additionally, as you break a curse and gather a rune you’ll get another bonus for locations that have the same symbol as the rune you acquired.

The game ends when one player has broken their fifth curse. The round is then played to completion so everyone has the same number of turns. Points are scored for require sets of runes and area majority for some of the temples is scored as well. The curse-breaker with the most points is the winner.

Leading off with what really makes Mystery of the Temples stand out—the art in this game is amazing. It has been easy to get to the table with many groups just because of how great it looks. And despite being mostly cards on the table, it has a great table presence with the circular layout and plastic gems in the center.

Mystery of the Temples isn’t just a pretty face though; it is also a lot of fun to play. The spatial element of knowing where to put your gems is really what sets this game apart from a crowded field of light weight set collection games. At lower player counts it is somewhat less interesting, although you can definitely see what your opponents are going for and determine if you can beat them to it or not. It really shines at four players though when you almost always need to have at least a plan B for when someone gets in your way.

Obviously if they break the curse you are going for before you do, you have to come up with a new plan. But you also cannot go to a temple or wilderness card where another player currently is, so you can get blocked out of where you intended to go in that way too.

Players will largely end up pretty close in points at the end of the game unless something goes horribly wrong. The bonus points from unique runes and the area majority for some of the temples can be a big swing in number of points and shouldn’t be discounted. That said there is a bit of a lack of tension in that way as all of the information is public and it doesn’t take much effort to know exactly where everyone stands. This can lead to analysis paralysis from players who want to math out all their options. Worse yet, they may find that there isn’t really any options for them to win in some cases.

Overall, I enjoyed Mystery of the Temples quite a lot despite potentially a lack of tons of depth. The crystal placement on your lattice is straightforward, but is a unique element that I don’t recall seeing in other games before. It’s one of the rare joys of teaching a game when you get to explain a rule that makes everyone stop and re-evaluate all of their preconceived notions and that is exactly what happens when you explain how the placement rule works here.

There isn’t a lot of room here though to make game altering decisions. Scores will likely all be bunched together and someone will win by just a handful of points. I wouldn’t mind something a little deeper with more opportunities to do something clever. But there is something to be said for a game that is just a little more laid back and easy going and there is exactly what Mystery of the Temples is.

Final Score: 3.5 Stars – Plenty of interesting elements in a small, but gorgeous package.

Misses:
• Not great with 2, best with 4.
• Doesn’t offer much in terms of depth of strategy