The great cooperative board game Mysterium has made the jump to our iPads. We review the iOS version of MYsterium and let you know if it was a successful digital translation. 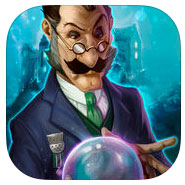 I think it’s pretty obvious that Asmodee Digital recognizes the growing potential of tablets as a board game alternative. And I for one am thankful for that. While I realize that 99 times out of 100, I’d rather be playing a physical version of a game with friends, sometimes that’s just not possible. Those are the times when I reach for my trusty iPad and open up a board game app.

Today we are going to take a look at the newest Asmodee title to make the jump to digital: Mysterium (review here). This cooperative app was actually due to be released in 2016, yet some criticism with about their Colt Express app caused them to put the brakes on two scheduled releases (the other being Potion Explosion) in favor of extra development work. Did the extra time pay off? Let’s find out!

Mysterium is a cooperative game where one player assumes the role of a restless ghost, while the other players act as psychic, paranormal investigators trying to put the spirit’s soul to rest.

To do that, the psychics need to find out who the true culprit of a murder is. The ghost will be communicating with the psychics through dreams. In game this is handled by the ghost passing the other players dreams: cards with abstract artwork on them that should clue the psychics in to a specific card in the array before them.

Players much each correctly guess their location, murder weapon, and culprit before moving on to the final stage (and before time runs out!). At the end, all players share a dream and must correctly identify the true culprit of the crime. If they choose the right suspect, all players win!

As is my usual preference for reviewing iOS games, I prefer to wait either a few weeks, or until after the first patch drops before reviewing the game. There are almost always various bugs that creep up unnoticed during development and usually these get sorted out once the game makes its way into the wild. This turned out to be a good move with Mysterium as the first patch made the game a lot more solid and stable.

When it comes to the visuals of the app, it looks fantastic as with pretty much every Asmodee Digital title. The artwork on the cards are lifted right from the board game, but the app also has the thematic backgrounds, effects, and over all solid production values you’ve come to expect from a high quality board game translation.

While I usually play games with my iPad muted, I did test out the sound on Mysterium and found it to be well done. It has a spooky feel to it, including some random floor boards creeping that really help set the mood.

In the game proper, things are fairly intuitive. The psychics are listed on the left side of the screen, with the available cards they can choose from in a row on the bottom. Clicking on a card will enlarge it in the center of the screen. A player can also click and hold on a card to bring up a magnifier. On the right of the screen are the dream cards. If you are a physic, then the cards the ghost sends you will appear there and you can switch between them with a tap. If you are ghost, your interface is similar; however, the right side of the screen instead has your hand of dream cards. A simple drag to the center will mark them to be sent to a psychic.

Finally there is a chat box at the top of the screen that psychics can use to communicate with each other during the game. Psychics also have access to clairvoyance tokens that they can use as voting chips if they think a player has made a correct or incorrect guess. These are limited, yet the more you use correctly, the more cards you get to see in the game’s final round.

There are a couple of ways to play the digital version of Mysterium. The first way you will want to play is story mode. This is essentially the game’s tutorial. It walks you through about 9 cases, with the player starting out in the psychic’s role before eventually learning how to be the ghost. Each mission comes with a thematic text intro and outro on a typewriter. If a player fails a mission, they’ll need to try again before moving on.

Once you finish story mode, then you can head to the main play area. There, there are four ways to get a match in:
Quick Play: Just what it sounds, join an online game as quickly as possible.
Online: Here you can either join or create a game with specific settings (player count, DLC, which role you want, etc…)
Blitz: Shorter games with more players
Solo: Play with AI controlled players

Notably, there is no pass and play option for people looking to play locally. This was a miss from their Colt Express app and it’s not an option here either. Although it might have just been too clunky to include for Mysterium because of how the game is played.

For the actual game play, I found Mysterium to be a curious choice to bring to iOS. In general, Mysterium is a very social game (for all but one of the players at least). While the ghost isn’t allowed to talk, having psychics communicate with each other is very important if they hope to win.

Thankfully, the game has a chat box where you can type out things to other players. While it’s far from the most intuitive of options, in any game I’ve won, we’ve made heavy use of the chat box. Part of me thinks having a native voice feature would have made this game a lot better. But I don’t know anything about app development, so that might not have been a feasible option.

That being said, playing online with other players is WAY better than playing solo. While the AI isn’t terrible at this game, I’ve found trying to get a read of an AI player much harder than real people. Sometimes I have no idea what the AI is trying to communicate with me in a dream card. Yet I also didn’t feel handicapped when I was playing with the AI either.

Something I should also note is that multiplayer is live only. There is no asynchronous game where you can take your turn at your leisure. If you leave the app before a game is done, you are basically out of the game. There is also no way to join a match and get a notification when it’s ready to begin. If you want to play Mysterium online, you have to dedicate your device to that until you are done.

That being said, the few times I tried multiplayer, I didn’t have too much trouble getting in a match. I even was able to join a 7 player game which, while it took a good amount of time, was an absolute blast. We were all communicating with each other via the chat, voting and it felt like I was playing a game of Mysterium. Obviously your mileage will vary with this one. The games popularity is going to determine how likely you are go get in an online game. But the few nights I tested it, I was able to easily get in a few online games.

To be honest, Mysterium isn’t the first game I would have told Amsodee Digital to convert to iOS. It’s a very social game that relies on communication, reading other players, and even body language. Yet is does work as an app. Asmodee Digital give us a good amount of tools to make it as interactive as possible, so it looks like the extra development time definitely paid off.

I will say that unless you are an absolutely Mysterium addict, you are probably going to want to stick with multiplayer mode. This just isn’t a game many people will probably enjoy with bots, although I am glad the option is there.

Overall, after the first update, Mysterium is a solid release of a really fun tabletop game. While it isn’t perfect, if you can deal with a few of its quirks, you can get your Mysterium fix in without having to bring everyone to your house for a game.

If you’d like to get a copy of Mysterium, the digital app sells for about $6.99.

Final Score: 3.5 stars – A solid digital translation of a great cooperative game. Bringing a social game to the digital world is never easy, but Mysterium does an admirable job at it.