Home Game Reviews My City Review
Review of: My City

We review My City, a polyomino based, tile-laying game published by Thames and Komsos. My City is a legacy game that's played out over 24 games that will have you changing your city of the course of the campaign. 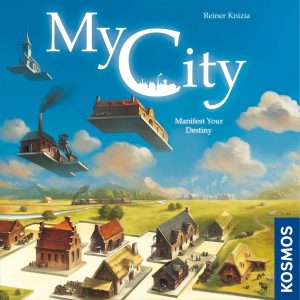 We love polyominoes. We love legacy games. We love city building games. My City is all of these, so of course, we needed to play it. What else are we going to do during a pandemic other than play board games? This is a spoiler-free review, so feel free to read on if you have not played. Also, please be cognizant of that in the comments below.

My City is a tile-laying legacy game for 2-4 players that plays in about 30 minutes per chapter, and contains 24 chapters. Our playthrough was with 2 players, but should play well at any player count.

My City is a legacy city-building game that takes place over 8 eras, each of which consists of 3 chapters. Over the course of the 24 games, a player’s landscape will change due to the addition of stickers, representing alterations and development made to their new world. Since each player has control over their own sticker placement, every player’s landscape will end up being completely different over the course of the game.

Gameplay in My City is driven by a deck of building cards. A card is flipped, revealing a specific type and shape of building, and all players have to place that building polyomino on their player board. If a player does not wish to play that building, they can either pass (for a penalty) or elect to retire for the rest of the game. Play continues until all players retire, due to a lack of desire or ability to place a building, or due to the building deck finishing.

Placement of buildings is driven by the goals and scoring of the individual scenario, which may include connecting various spaces, or covering landmarks, or placing buildings in a certain configuration. However, rules such as keeping trees uncovered, or covering up rocks, remain in place for pretty much the entire span of chapters. At the end of each chapter, victory points are awarded based on which player scored the highest city score in that chapter. Also, the players who do not score victory points are awarded a boon that makes it easier to have a high city score in subsequent rounds. At the end of the game, the player with the highest number of victory points has developed the most successful city!

It is of no surprise to readers of our reviews that we are suckers for polyomino games, so when we saw a legacy game with polyominoes designed by Reiner Knizia, we knew we had to get it to the table asap. Our love for polyominoes will not be denied!

My City had to have been difficult to design, simply due to the fact that it is not just a single game, but is actually 24 different games designed around a common rules engine. It is obvious in the design of each era and the chapters contained within, that a lot of time went into making sure that the game remained balanced throughout, and that it would be very difficult for a player to run away with a victory. Since the winner of the chapter does not receive a boon for later rounds, this keeps the games relatively close in score, with a chapter decided by a point or two on multiple occasions. The only time we observed this break down was close to the end of the game, where one player pretty much ran away with the score in the final 3 chapters. This was solely our experience—your mileage may vary.

One of the most difficult things a legacy game has to do is introduce new rules to keep the game fresh and the rules additions to be as easy to integrate as possible. My City absolutely excelled in this, adding new facets to gameplay, changing scoring options from chapter to chapter with ease, and just as easily transitioning away from them as the ages marched on. Each chapter had its own tweak, but the common throughlines of keeping types of buildings adjacent or connecting landmarks kept the game familiar. Unlike many games with lots of errata and FAQs, we never felt the requirement to run and look up the nuances of a particular rule—gameplay felt natural and easy to grasp.

As much as we enjoyed the various scenarios, we definitely recognize that a few of them were a little clumsier in their integration. While not going into specifics for spoiler-based reasons, the chapters we took issue with were the ones that wholly disrupted that commonality and organic flow of rules from one scenario to the next. Some players might enjoy the upending of norms a good portion into a legacy game (and we *loved* the twist in Pandemic Legacy Season 1), we found that some of the turns My City took were a little too sudden for our tastes. Even with a miss here or there, the average was not affected that greatly—My City was still an absolutely delightful experience to play.

Final Score: 4.5 Stars – An extremely positive gaming experience, My City should be on your to-purchase and to-play list.

Hits:
• Great introduction to a legacy-style game for new players
• Most legacy additions were interesting and integrated seamlessly
• Addition of stand-alone rules for play after the scenarios are complete
• We are suckers for polyominoes and will play any and all games with them

Misses:
• A few of the scenarios were a bit clunky
• Seemingly balanced up until the endgame