We review Mow Money, the auction game about the lawn mowing business from Mayday Games. In Mow Money, players are trying to earn the most money by bidding on lawn mowing contracts. 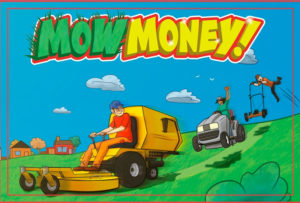 When I was a teenager, I worked a bunch of odd jobs. I worked at a local pizza place, cut and delivered firewood, and worked for a lawn maintenance crew. The last of these jobs has found its way to become the theme of the game we will be looking at today.

Mow Money is about the bidding side of the mowing business rather than the physical job. Players will be competing for the different jobs in the local subdivisions. Competition will be fierce for the limited opportunities as players try to undercut their opponents with the hope of earning enough reputation. Let’s get into the review to see if Mow Money makes the cut.

Mow Money is an auction and hand management game for 1-6 players to play in 30 to 45 minutes. In my experience, the game plays best with 3 to 4 players.

At the start of the game, players will first set up the neighborhoods and contract cards. Players will then get all of their starting bits and lawn mower. Once they draw five basic bid cards and collect their three bluff cards the game can begin.

Each round is separated into four different phases:

1. Invest Phase: Players use their money tokens to buy lawnmowers and bid cards.

2. Bid Phase: Players use their bid tokens to either bid on neighborhood contract cards or to perform an odd job. Each contract card has the required number of each type of bid card you are required to play in order to have a chance to win that contract.

3. Resolve Phase: After all players have placed their bids, all players flip over their bid tokens to show where they have placed their bids. First you resolve all the odd jobs and distribute the income earned to the players. Then players determine who won the contract card. If you are the only player to bid on a neighborhood, you automatically win the bid, and earn the total value of the bid cards used.

If multiple players make a bid for the same contact, the lowest bid wins the job. Players who do not win that job return their bid cards to their hand. If a player hasn’t earned a contract or used the odd job token, they have the option to compete an odd job from the bid cards in their hand.

4. Maintenance Phase: This phase sets up the next round. All neighborhoods that had their contracts claimed this round will be replaced and the starting token moves to the next player. If there is a neighborhood that can not replenish with a new contract, the game is over.

The player with the most reputation points from contract cars, including earning one reputation point for every three dollars they have, becomes Walkerville’s official city landscaper and wins the game.

Right out of the gate, I could see that the theme of Mow Money could be hit or miss for some people. Mowing isn’t exactly a universal love. Even my wife scoffed at the game the first time we played together. But that thinking quickly was cut down after a few games because Mow Money is a solid game.

The game has two core mechanics that drive this game forward, hand management and blind bidding. By taking current contracts into account, and noticing what a player is buying you can make an educated guess on what contract they might be going after. Knowing this allows for you to make strategic purchasing. Players will have cash but not enough to go throwing it around, you have a business to run. This is the most impactful early in the game when you don’t start out with any cash.

Upgrading your mowers gives you more flexibility as you move on throughout the game. Most of the higher reputation contracts require cards above the basic bid level. Because the contract cards are randomized, the order will determine how quickly you need to upgrade.

While the hand management element of the game is solid, the real star is the bidding portion of the game. This isn’t a game where you can just throw down any combination and expect to win the contract. You have to use the information from the investment phase and try to anticipate what the other players will do. This allows you to have an idea if you can place a high bid because you think you are the only one going for it or be more aggressive and throw out a low bid. This of course doesn’t work all the time with information being hidden, but it leads to some fun moments when you guess right or wrong.

I really like the addition of the bluff cards to attempt to manipulate the other players, but in practice I didn’t see them used much. Most of the time you want to use each of your two possible bids each round. Spending one of those not having the opportunity to earn some cash or reputation can set you back.

Competition for contracts is necessary to make the game interesting but a string of losses can set you back quickly. You not only lose the reputation points needed for victory, but also the cash to collect new bid cards or new mowers. While getting the bid cards back from lost contracts does give you a chance the next round, the changing contract requirements might make it so you can’t do much next turn. You could turn in your bid cards to complete an odd job, but sometimes you lack three cards that have matching symbols.

This means that at times you are just stuck and have to wait until the right contract cards come up to get you back into the game. While this setback isn’t insurmountable, it takes an aggressive effort to gain it back. I like how players have the option to trade in bid cards, but it doesn’t work in every situation. I wish there was the addition of a catch-up mechanic that allows you to trade in future reputation for cash now, but only if you are unable to complete an odd job after the contracts are resolved. This would eliminate one of the most disheartening things in games when you look at the table and realize you are not able to do anything.

There is the other side of the coin as well. Players who are able to win those contracts, and use the money from them, build their empire quickly. They can use those lower value contract cards to decrease their bid amounts and upgrade their mowers quickly. This leads to a rich get richer situation.

Despite these occasional issues, the overall game in Mow Money is solid. What I liked about the game was how quickly it played. Once everyone got the basic idea down, rounds were taking less than a few minutes to complete. The game manages to find the sweet spot between simple game play and meaningful decision-making.

I also want to mention how well the game mechanics fit with the theme. Anyone who has ever bid for a job knows that money is the primary decision maker, with the other being reputation. The game manages to mirror real life quite well with both of these mechanics.

Mow Money does scale well as you increase the player count. By simply adding more neighborhoods and contracts, the game plays decently. The only real change is the amount of time the investment phase takes to complete.

The enjoyment I found in Mow Money was higher than I expected. The combination of the bid cards and blind bidding creates a game the is both strategically interesting and connects well with the theme. I haven’t enjoyed many games that use blind bidding, but Mow Money bucks that trend.

The game isn’t without small flaws, rich getting richer and the lack of a universal catch-up mechanism hold this game back from being great. Despite flaws, Mow Money will be a game that I look forward to playing in the future.

Final Score: 3.5 Stars-  A blind bidding game that manages to bring fun to lawn contract bidding, but game situations hold it back from being great.

Hits:
• Lots of information gathering and strategic decisions
• Great iconography
• Moves along at a good pace throughout the game

Misses:
• Catch-up mechanic could be more versatile
• Moments where you can’t do anything
• Rich getting richer situations can occur