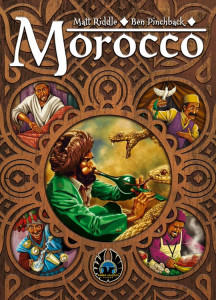 I jumped on the chance to preview Morocco when I saw it was a game created by the design team of Matt Riddle and Ben Pinchback. This team has brought us such favorites as Fleet and Eggs and Empires. They are also the brains behind the soon to be released titles Fleet Wharfside and Floating Market.

When I read the description of Morocco on BGG I became really captivated when it said “In Morocco, players will send their workers out to try and claim stalls at the market. When enough workers from the same family have made it to a stall, that family claims it and clears out any adjacent juice sellers.”

Okay it sounds like a Euro-style game… Check… It sounds like an Area Control/Area Influence game… Double-Check. Indeed these are all checks on the plus-side of my gaming ledger.

Morocco is going to be produced by Eagle-Gryphon Games and is currently in funding on Kickstarter. So let’s dive in and see if it’s a game for you to back on Kickstarter.

In Morocco, players will be competing with each other to garner the richest and most advantageous stalls in the market of Marrakech. They will be doing this by surveying the market and then taking over the stalls with their workers in order to gain the largest contiguous areas of stalls for themselves.

The setup of the game is quick and easy. It takes about 5 minutes to dole out the player components, lay out the piles of Gold and Market Information Cubes, and randomly arrange the game board to start play. I found Morocco’s rules to be very easy to pick up and then teach.

In Morocco a game round consists of the following phases:

Starting with the 1st player and continuing clockwise, each player selects a spot on the Roof to place the Pawn in order to gain two Market Information cubes from the supply that correspond to the ones in the spots to either side of the Pawn. The other players also receive one Market Information cube from the supply that corresponds to the one that is located in the spot where the Pawn has been placed.

2. Assign Workers Phase:
In turn order, each player places one of their workers into a space in one of the open Market Stalls by spending Market Information cubes. When this is done twice per player, the game round ends.

There a 4 spaces per Market stall and there are 4 types of workers: Regular Workers, Bodyguards, Tourists, and Cousins. Regular Workers and Bodyguards can be placed in a Market Stall by expending two Market Information cubes from a player’s pool of cubes and placing them back into the supply. These Market Information cubes must be of the same color of the ones that align with the chosen Market stall (located at the right side of the row and at the bottom of the column). The same Market Information cube cost applies to the Tourists and Cousins, but the player must spend an additional cube of their choosing in order to place them in a Market Stall.

In-game scoring is triggered when a Market Stall is closed. This occurs when the 4-worker limit is attained or exceeded in a Market Stall. Players that have workers in a stall that is about to be closed, may score points and/or gain Gold Coins or one of their available Bodyguards. They also receive any Juice Seller tokens that remain adjacent to their workers in the stall.

The game ends immediately when there are 5 or less open Market Stalls that remain of the board during an Assign Worker phase. End-game scoring is then conducted where players gain points for each Market Stall in their largest contiguous plot of Market Stalls and points for each Juice Seller token they obtained during play. These end-game points are added to the current point totals. The player with the most points wins the game.

I find this game very intriguing. On the surface Morocco portrays itself as a modest area control/area influence game: gain some market information, use that information to place workers in the market, and compete with the other players to close the most market stalls to gain the most points. As I continue to play and play this game, Morocco lifts off its humble pretenses and reveals a depth of gameplay, a unique combination of game mechanisms, and a “take-that” attitude that I don’t believe I have ever experienced before.

Morocco offers its players a series of crucial decisions to make during each and every round. I very much enjoyed that the game rewarded me for attentive and focused-play and for keeping up the pressure on the other players. For me, this crucial decision-making starts at the beginning of the first turn of each game. In the Market Information phase, players obtain colored information cubes that are spent in order to place workers in the market stalls during the Assign Workers phase. This appears mundane enough, but there are 3 choices to consider:

I did not find these 3 choices to be trivial. Right from the start of the game I found that I could use my pool of information cubes to employ similar strategies that I use in the wargames that I have played. I may want to attempt to group my workers in stalls that are next to each other to attempt a “strength in mass” maneuver or I may want to diversify the worker placement into stalls that are in separate areas of the market to force my opponent to contend with me on “multiple fronts”.

In 2 and 3-player games, players obtain “random” information cubes based on a roll of the Market die before their Market Information turn begins. In a 4-player game players do not obtain these additional cubes. A player may have a choice in the color cube they get only if a “Wild” result is rolled. A player will most likely welcome a “Wild” result. I know that I did.

Having additional cubes may make it easier to determine how to play out your Market Information turn, but not always. You may get a set of random starting cubes that do not support what you want to do during the Assign Workers phase. You may be limited to what free space is available to place the roof pawn based on how your opponents conduct information cube selection during their turn. One consolation, at least going first in turn order gives you first dibs on placing the pawn. For me, these potential puzzling challenges are what I seek in a strategy game of this sort.

Since each player only obtains 5 cubes during the Market Information phase, I enjoyed taking any opportunity I could to influence mine or an opponent’s cube pool mix. If I could seed their cube pool with a potentially “unusable” cube, then I certainly paid attention to that.

The Assign Worker phase is the heart of Morocco. This part of the game really brought out the strategist in me. Like I said in my earlier comments, it unchained my old wargamer mentality. Morocco did this to me in a pleasantly subtle manner, slowly exposing all of its strategic possibilities as the Market Area filled with Market Tiles.

I am going to walk you through some of my favorite tactics that I discovered while playing Morocco:

Maybe more enjoyable then employing these tactics is to determine how to react when the other players try them on you.

Morocco is a game that I think about over-and-over after I have played it. I cannot wait to play it again. It offers gameplay decisions that are distinctive and stimulating. There is a much replay value in Morocco based on the random setup, the gameplay options, and the player count. If you are looking for a unique game experience and are a fan of Area Control/Area Influence games, I highly recommend checking out Morocco.

If you’d like to become a backer, pledges start at $44 for the full game and stretch goals. Morocco is scheduled to be in backers hands in June of 2016 and you have until Wednesday, October 21st to become a backer. Head over today and check it out.