We review Moonflight, a deck-building board game published by Man o Kent games. In Moonflight, players will be building their deck as the game goes, and then will need to unbuild it. 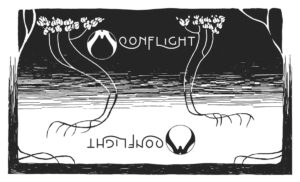 Board game designers are in a tough spot. With every  design, gamers are looking for something new or a twist they haven’t seen before. It doesn’t necessarily have to be an entirely new game structure. Sometimes something as simple as a twist on card play can make an average experience into something entirely different. This is where we arrive at Glenn Ford’s Moonflight.

Deckbuilding is now a well mixed formula and this designer (known for his exceptional delivery of Gaslands: Post Apocalyptic Vehicular Combat) is setting his sights on adding something new to the genre. Moonflight is a deck-deconstruction game, as Ford puts it, with each player’s goal being to reduce the number of cards in their deck to the point where they only have 5 or fewer cards. At the end of the game, only cards in hand will score points, so, for the maximum of 4 players over 90 minutes, players will be strategically buying and then finding ways to remove their cards from the game.

Now, as for the theme, this is where the game takes an even wilder detour. The narrative positions players as “Jacks,” lords of the fictional city of Moonflight which comes to life during the night. Through various means, they seek to gain power, and then, with the coming of the dawn, the Jacks go back to slumber having changed the city in their favor.

The basic structure of Moonflight is pretty straightforward as far as deck-building games go. There is a set of static cards for purchase, the number of which is based on player count. There is currency in the game to purchase cards and the static cards to purchase provide additional currency per action. They also, predictably, allow a player to draw more cards or are worth points for when the game ends.

On every player’s turn, they take one action. Mainly, this is either to play a single card from their hand for its effect or to purchase a card, either from the static card sources or the dynamic card rows provided by asymmetric decks from each player. Here, each player brings to the environment a supply of cards suited to their Jack’s play style. Some may work by drawing and discarding cards rapidly, others might allow for gaining money faster. Since a player’s dynamic cards refresh only when one of their card purchase slots is empty, it’s necessary for players to purchase cards to progress the game. They cannot simply play their starting cards waiting for the game end.

Once a player’s supply deck of cards is depleted, the game takes a turn, literally. At this point, every card in the game is rotated 180 degrees. Each card is divided into a top (light) half and a bottom (dark) half. At the “turn”, players will begin to use the bottom half of the cards which usually helps to speed the end game by removing cards from their decks. Once the cards have turned, they’re also often more expensive.

To be entirely fair to Mr. Ford, this reviewer is quite fascinated with deck building games in general and is also currently designing one. To really know the ins and outs of deck building, it is necessary to play many different designs to get a feeling of what works and what doesn’t. Different deck building games try to focus on various elements of the card cycle and the enjoyment of the game as a whole depends greatly on what players latch on to in that cycle. As such, it is this core mismatch between this reviewer and the basic goal of the game that is the biggest source of a less than positive score.

Some explanation is necessary here. Many early deck building designs focus on the continuous acquisition of cards, and points are gained for the total score of a deck regardless of what other cards are in the deck. Since any cards which don’t provide any actions slowed the deck down (points cards in Dominion), as players acquired points they were also providing a catch up mechanism. Some other games focus on how many cards a player can remove from their deck and what types. This can be seen in Tom Cleaver’s Valley of the Kings.

However, in Moonflight, points are only gained for a player’s remaining cards in hand. In the narrative arc of the game, this feels incredibly anti-climactic seeing an entire engine decomposed. In a game like UNO, getting rid of cards is great because generally players mentally see cards as negative. However, here, players are purchasing cards and then forced to get rid of those same cards. It just doesn’t make for a positive feeling.

Another element of discord here is that it doesn’t always feel like the deck styles of players can be synergized easily. For each player, it feels more appropriate to purchase cards that naturally feed the engine of their own cards than to purchase cards from an opponent’s supply. As such, Moonflight can feel like it’s building its own engine instead of allowing the player’s agency to direct it themselves. Couple this with the single-action-a-turn play structure, and it feels like a game driven by a script and not by the players.

Finally, the theme and art need some comment. It’s not that the theme is completely unappealing, but as a product offering, the art style and card design is far offbeat. The cards are a large tarot size but the art is so minimalistic with drab color that it does nothing to draw the players into the world presented.

Moonflight has a very interesting theme. It has an exceptional core mechanism with the card turning. What’s less interesting is the single card action play structure and the end game scoring. This could be an exceptional game design but there are quite a few unpalatable choices here to make for a game that will appeal to a wide range of deck building fans. Unfortunately, this reviewer stands with the group who will take a pass given another chance to play.

Final Score: 2.5 stars – Moonflight does it’s thing, but the structure and art are too off beat to provide that game progression arc that makes most deck builders great.

Hits:
• Unique theme
• The game “turn” is an excellent mechanism

Misses:
• Core scoring goal is problematic
• Decks can feel like they play themselves
• Production design is non-ideal for the theme