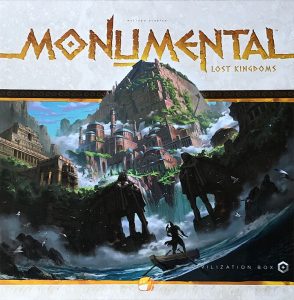 Earlier this year, I reviewed the unique deck-building game Monumental. I was surprised how much I liked the clever gameplay and have eagerly gotten this one to the table as often as I could.

Since that, publisher Funforge have offered up the first expansion for Monumental for us to check out. The Lost Kingdoms lets players take four new empires for a spin: The Aztecs, Amazons, Atlanteans, and the Mughals. Is this worth getting for fans of this game? Read on to find out!

The Lost Kingdoms not only comes with the aforementioned new kingdoms to command, but also new terrain tiles, new wonders, and components for a fifth player. The new terrain tiles all add some kind of minor effect to the game, such as a bridge that can only allows access to tiles on either side of it or the jungle that requires an extra resource for an explorer to move onto it.

While the new cards and tiles are nice, the real star of the show are the four new empires. Each does something unique to set them apart. The Aztecs let you sacrifice your soldiers for resources, while the Amazons have a brand new resource they can use in the form of horses. Then there are the Atlanteans, who are masters of science and actually have a separate row for their science cards, called the nexus, that pulls them out of their city. Finally, there are the Mughals, which use their cultural policies completely different. They are actually placed in rows and columns around their city to be activated like normal city cards.

If you are looking for a quick summary, you can label Monumental: The Lost Kingdoms as more of the good stuff that you love. More civs, more cards, more tiles. This expansion fits neatly with my gold standard for expansions: it adds more variety without too much in the way or rules overhead. Even with the four new civs having their own unique feel, I never felt like I was learning a new game with them. Their new abilities all seem to break the mold, but easy enough to understand that you can just jump right in with any of them after you’ve gotten a game under your belt.

I only glossed over it above, but The Lost Kingdoms does add components for a fifth player. I didn’t actually try out the game with five players because, to be honest, I don’t even want to play this game with four players. The downtime with five would just be brutal. That being said, the upcoming African Kingdoms expansion is supposed to add in a continuous play mode to alleviate this issue, but that doesn’t help us now.

For the new tiles and layouts, they are welcomed for the most part. It’s always good to have more variety in the maps. My only criticism of them is that there are no symbols or icons on the new tiles to remind players that they do something special. Some, like the Aztec pyramid or the bridge, are pretty straight forward, but more than once we accidentally skipped the special rules on the jungle tile because we didn’t notice that it was different than a forest.

Finally, I really liked what they did with these new civs. While the core game civs mostly played the same, outside of a few cards in your deck, these four definitely feel distinctive. From adding culture cards to your city with the Mughals, or the nexus of the Atlanteans, these civs are much more than just a “palette swap.” You’re really getting a unique play experience with each. I think my favorite is probably the Atlanteans, as I loved how they broke out the science cards into their own tableau. This allowed me to try out a completely different strategy in the game.

Monumental: The Lost Kingdoms is an easy recommendation for fans of the core game. It’s more of everything you love: civilizations, tiles, cards, minis… the works. The production values are just as good as the core game and you can easily play this one without having to learn much in the way of new rules. However, if you weren’t a fan of Monumental’s gameplay, then there isn’t anything here that will change your mind. The rules are pretty much the same as in the core game. My only other gripe is that I wish there was a way to store all of the new content in the base game box. This big guy is already taking up a good amount of shelf space.

Misses:
• Special tiles could have used an icon
• No way to store the expansion in the core box