We review Monolith Arena, a new abstract strategy board game published by Portal Games. Monolith Arena is based on the Neuroshima Hex game system, but updates it with some improved game play and components. 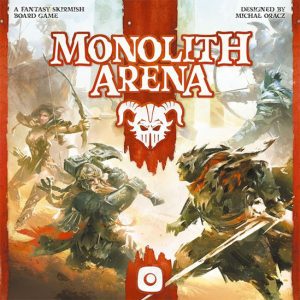 It’s no secret that Neuroshima Hex has been a much loved game for the folks here at BGQ. It’s earned itself a 5-star review and a place in my Top 10 Favorite Games list. Today we are looking at Monolith Arena, which might as well be Neuroshima Hex 4.0. It’s a reboot, of sorts, creating a new entry point for those unfamiliar with Neuroshima Hex and a new twist for battle-tested veterans.

Monolith Arena is a tile-laying strategy game for 2-4 players, although it plays best as a one-versus-one experience. Each game plays in about 30 minutes.

If you are already familiar with Neuroshima Hex, there isn’t much to add to how the game works. For the uninitiated—each player chooses a faction and places that faction’s banner on the hexagonal board. Then, players take turns adding units and power-ups (called runes) to the battlefield. When a player plays a battle tile, or the board is completely filled, all units will activate in a predetermined initiative order, attacking in various directions.

Each turn you’ll draw three tiles, discard one, and play the other two. In addition to the units and runes you can play to the board, you can also play special action tiles that allow you to move, initiate battles, or any number of powerful abilities.

The tiles available to each player varies widely based on the faction they choose to play. The Guardians of the Realm faction, for instance, is full of tough units that can survive multiple attacks and they have access to a fire concoction action tile that wounds all units in any three-hexagon cluster.

The wrinkle for those with experience in Neuroshima Hex is the addition of… well, monoliths. Monoliths are essentially a vertical stack of three tiles, with your faction’s banner on top. On your turn, instead of adding anything to the board, you can unfold your monolith. The banner itself won’t move, but you can place one of the hidden tiles underneath adjacent to the banner and the other tile adjacent to the first unfolded tile. You do have to have the room to completely unfold your monolith to take that action, so if you are crowded by existing tiles, you’ll find yourself unable to spring out the surprise attack. After a battle is resolved, monoliths automatically fold back together.

Play continues until a faction runs out of tiles or you’ve dealt 20 damage to an opposing banner. The surviving player (or the one with the most remaining health) is the winner.

Monolith Arena, like its older brother, is a fantastic mostly-abstract strategy game. Games play out quickly and every decision feels important. The game is heavy on tactics as you have to adjust and readjust to the units and runes your opponent is playing. Even if you take some licks in the first few battles you never really feel like you are in a position you can’t come back from.

But Neuroshima Hex has been reviewed hundreds of times in a number of various editions. So the remainder of the experience section is really going to explore what sets Monolith apart. Of course, the monoliths themselves add a neat touch but aren’t integral to what makes the game fun. Whether you prefer the post-apocalyptic setting of Neuroshima or the fantasy world of Monolith Arena is obviously just a matter of tastes.

What Monolith Arena does give you is way more exciting factions in the base game. The standard Neuroshima Hex armies all felt quite plain. There is the melee one, the ranged one, the initiative one, and the movement one. They truly feel like four versions of plain vanilla. And while it’s fine for a bit, it certainly lacks flair.

Monolith doesn’t fall into the same trap. The standard factions have themes that tie them together, of course, but also units that are incredibly unique and powerful. The dark elf themed Harbingers of the Forest, for instance, have a Morlock unit that attacks first in combat but is destroyed in the process. The human faction has a unique ability called charge, allowing them to have a single unit attack without a battle being initiated; so long as it can first move in the direction of its intended target.

The production quality is also heads and shoulders above what you get from Neuroshima Hex. The faction cheat sheets that outline all of your tiles are well laid out, filled with awesome art, and have some cool spot-UV coating to make the characters really pop. The tiles themselves are a bit larger and thicker, giving slightly more room for both art on the tiles and graphic design to clearly show the unit’s abilities.

So let’s say you already own Neuroshima Hex and all of the expansion armies… do you need Monolith Arena? Maybe not. It does seem, for the moment, Portal is continuing to support both games. They have announced an additional army for Neuroshima and a new faction for Monolith in the coming year. If you are a big fan of the system, having both in your collection is worth it just to have additional armies are your disposal, even if they don’t necessarily cross over.

If you don’t own either at this point, start with Monolith Arena. The production quality is improved. The base game factions are cooler. The monoliths are neat and add to the table presence of the game.

Hits:
• Starts with a fantastic tactical combat game and improves upon it.
• Base factions are interesting and fun to play.
• Bigger, thicker tiles with improved art and graphic design.