We review Miyabi, a tile-laying game published by HABA games. In this family weight games, players are trying to earn the most points by placing tiles into their garden. 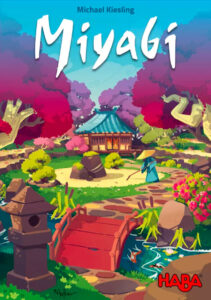 HABA is well known for its yellow boxes line of “kids” games. Kids, in quotes, as Tony over at BGQ Headquarters maybe loves Rhino Hero more than any 5-year-old ever has or ever will (Editor’s note: Andrew is not wrong). But they continue to expand into more family weight games that really fall perfectly into the gateway Eurogame category. As your kids start to expand from the stacking and counting focus of the kids’ games and into more strategic and tactical-based games, HABA wants to still be the publisher of choice. And they have some big name designers backing them up.

Today we are looking at Miyabi, one of the HABA games in this line designed by Michael Kiesling who is best known for the Azul series of tile-laying games.

Each round a number of different tiles for your garden will be laid out, depending on player count. The tiles come in different sizes (1 to 3 squares) and a variety of polyomino shapes. Each tile only has one feature on it though, and the number of objects in that feature equal the size of the tile. For example, a koi pond tile that is 3 squares in size will have three fish in the pond. This is important because you score points when placing a tile-based on the number of objects on the feature.

When placing a tile you can place it anywhere on your board, even on top of existing tiles. You can never overhang halfway off of a level, but can otherwise cover up existing features. The other placement rule is that you can only add features to a certain row (maple trees go in the first row, pagodas go in the second row, etc…) and you can only add once to each column every round. So when you place a tile you’ll add a lantern marker to that column, limiting your options for the rest of the round.

The points you get for adding a tile aren’t just the number of objects on the tile but are multiplied by its vertical level. So if you place that three koi fish tile on the second level, congrats, you’ve just earned yourself six points! There is a bonus tile for each feature for the first player to add that object to a fifth level so building up in a hurry can be incredibly lucrative. However, at the end of the game players will also score points for having the most visible features in each row. So covering up for previously placed features does come at a loss.

Miyabi ends after a set number of rounds (which changes based on player count). Players add their points for feature majorities to the points they scored throughout the game and whoever has the most is the winner.

As with many of the HABA big box games, there is a sneaky amount of depth here. Not that anyone should be surprised considering designer Michael Kiesling has given us some of the best tile-laying games ever throughout the years.

Yet it is simple enough to work for the whole family. The box says 8-and-up although I did play with my seven-year-old and he was able to grasp the rules if not necessarily the strategy right away. He zeroed in on wanting to have all the fish he could manage to get and only after realizing he couldn’t fit in any more did he really open up to trying to maximize points a bit more. For older kids and gamers the puzzle of trying to build up as quickly as possible while minimizing how many features you cover-up was a fun puzzle to try to work out.

There is a good amount of interaction between players to keep things interesting. Obviously drafting from a shared pool of tiles can open up the hate drafting opportunities, especially later in the round when players only have a column or two they are allowed to add to. There is also the race to be the first to build each feature on the fifth level—a task that requires a lot of planning but can be thwarted by others who are trying to get there before you.

The box includes a few small optional expansions you can add to ramp up the difficulty if you are playing with more gamer-minded kids or if you feel you’ve mastered the spatial puzzle that Miyabi initially provides. The frog expansion was a big hit as it provided another scoring opportunity but also served to often get in the way of your plans and made it more difficult to place tiles at times. Others provide additional end-of-game scoring conditions and really just increase the number of things you must consider with each tile play.

The biggest knock against Miyabi is that it may not quite do enough to stand out in the world of tile placement. The Azul line feels similar enough in weight and NMBR9 is perhaps lighter but more simple in how it approaches building up. Miyabi mixes these two worlds in a way that is unlike either of them, but if your gaming shelf is already full of tile-laying games you aren’t really in for a lot of surprises here.

HABA’s line of more family weight games continues to impress. Miyabi is perfect for your big kid gamers who love the yellow-boxed line but aren’t quite ready for Castles of Burgundy. Every tile placement scores some amount of points but it’s a balance between maximizing big points now at the expense of the end game majority bonuses and trying to spread out in your garden so you don’t run out of legal tile placement options at the end of the round.

The included mini-expansions, which in many games aren’t worth even mentioning, actually add a great deal of depth and variability to Miyabi and can really extend the life of this one on your shelf. It’s easy to compare it to many similar games, Azul, NMBR9, etc… If you already have those maybe there isn’t enough here to differentiate it. But it certainly belongs among those well thought of games.

Hits:
• Rules are very straightforward, perfect for the family.
• Spatial puzzles can be very thinky, especially with added scoring options from expansions. 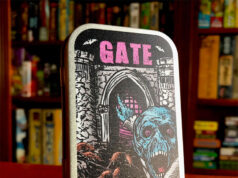