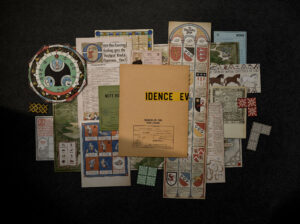 The plain envelope was unmarked, except where it wasn’t, and read “OPEN FIRST” and there was an unfamiliar insignia because all secret societies should have an emblem clearly emblazoned on all materials sent out.

Inside was a letter addressed to me and a business card from the Ministry of Time. It had a cartoon depiction of an idealized caricature of the person. But he had quite the beard, like Obi-wan Kenobi in his hermit prime. I was smitten.

The Ministry of Time was reaching out for assistance to help track down a missing agent and understand the source of an anomaly, or the use of technology that didn’t exist in that era, in the medieval ages. And then it hit me. Only a person with a beard like that could send mail back in time. Imagine if someone like that worked at a Kickstarter fulfillment hub.

Mini-Mysteries is a self-contained, app-assisted, escape room-like puzzle experience. The one I was provided was called Medieval Mishap and has you looking for a missing time-traveling agent and uncovering clues about a series of mildly unfortunate events happening around a knight’s tournament.

Log into the website following the instructions provided and then follow along with the story using the different materials from the folder as indicated for each task. In many cases, you’ll need multiple items as you reference the overland map, a list of Knights competing in a tournament, and another agent’s journal.

As you solve puzzles you’ll input the answers into the tablet. If you get it wrong, you can ask for a clue or even the solution if you’re completely stuck. As you get things correct, the story will unfold providing more information to help you solve the mystery.

The website considers this a medium-difficulty puzzle and should take 1-2 hours.

If the gameplay overview was brief it was because there’s not a lot mechanically going on with this puzzle-solving experience and walking through any of the puzzles could ruin your experience. And with this section, the efforts will continue to not drop major spoilers or show solutions to the puzzles.

The mystery took my family about two and a half hours to complete. Most of the puzzles were fairly straightforward forward and clues given made it fairly easy to know you had the right answer. As the story unfolds you’re talking to different townsfolk to try and narrow down a list of possible suspects. But each one needs help with their own problems which create hoops for you to jump through. The app provides background music along with some funny background commentary from the tournament and has voice acting for each character you interact with.

These characters have personalities that add flavor, humor, and positivity to the overall experience. And all the words spoken are also shown on screen so even with sound off you can experience the game. (For any hearing-impaired readers: there is one puzzle that you need to hear, but you can always ask for the solution as the app/website didn’t provide a text transcription of the sounds played.) My only complaint with the website is that occasionally the background flavor noise interfered with the character speaking and the website waiting for you to click next if you’re reading which gave a stilted presentation.

This is family-friendly and written in fun way. There are no grisly crime scenes or disturbing images to work through and the antagonist is more akin to an 80’s cartoon villain than a real criminal mastermind. I played with both my wife and our seven-year-old son and there was no content that made me regret my parenting choices. The biggest issue will be for the adults to not just quickly solve things ahead of any children playing along. So this could be subject to an alpha player. I suggest a spray bottle with water to spritz them like a misbehaving puppy as needed.

While we were able to efficiently solve most of the puzzles easily, there were two that confounded us. The first was because we started getting the materials mixed up (one of the items had two sides and we thought everything was used all at once instead of sequentially).

The second puzzle completely stumped us. Even with the solution which allowed us to proceed, we still didn’t see the answer and we went back and re-solved the puzzle and still didn’t see the answer. I went through the experience again and found that we had made a mistake which is why we didn’t get the right answer. But at that time that failure took the wind out of our sails. Despite not liking asking for help, I really appreciate the ability to move on instead of being stuck to the point of rage quitting.

The largest, yet predictable, downside of this type of experience is replay value which is functionally non-existent as you’ll basically know where to look to solve each puzzle. However, for a family of three in the US, this is about the price of going to the movies with a similar duration but with a lot more interaction. The day after completing it, my son wanted to go through it again (which we did) and mentioned wishing that there were more missions. I could see a second play with mostly new players being more enjoyable as a social activity or if a long enough period of time has passed that you don’t remember the minute details of each problem.

I really enjoyed my play of Medieval Mishap as a fun activity with my family. It wasn’t overly intense and was an engaging way to spend a weekend morning. While I don’t think there’s really an upper limit on the number of players, I’d think smaller groups (2-3) would do better than 4-5 as there are limited handouts to go around and it seems more likely that players can get sidelined as the group grows (but like an alpha gamer, that’s a group dynamic as much as a game limitation).

Hits:
• Fail forward setup keeps the experience moving along
• Puzzles that require you to piece together information spread across multiple items
• Thematic handouts