We review Mini Divercity, a cooperative set collection and hand management board game published by Sphere Games. In Mini DiverCity, players are working together to try and save the reefs from hotel builders. 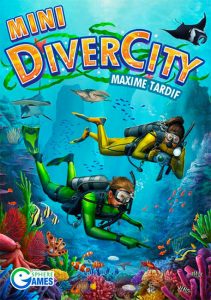 “One of the first conditions of happiness is that the link between man and nature shall not be broken.”
—Leo Tolstoy

DiverCity boasts a beautiful natural ecosystem, a diverse animal population thriving in a healthy coral reef. Unfortunately, corporations are starting to move in, threatening to exploit its natural resources. Your team hopes to convince the local government to turn the reef into a national park before big business ruins this fragile environment forever.

Mini DiverCity is a cooperative set collection and hand management game for 1-7 people that plays in about 15 minutes. It plays best with 5 players.

Players start with a hand of species cards with the card fronts facing the other players. Cards are played blindly from ones hand or with the help of another player.

Each round consists of two turns, the corporation’s and the diver’s. The active player acts as both.

For the corporation’s turn, a corporation card is flipped and resolved. These cards consist of:

For the Diver’s turn they may choose one of three actions: play a species card to move that species closer to survival, use the walkie talkie to tell another player what cards they are holding, or discard a random card to flip a hotel back to its island side.

Each player will also have a one time use power that they can use during one of their turns. These are special actions that range from looking at their own hand to reordering cards from the corporation deck.

Players win by saving the number of species based on their chosen difficulty. Players lose if all six hotels are built, if too many species go extinct, or if the species deck runs out.

If you think getting buried in sand or drowned while searching for treasure as a group is frustrating, try getting invested in saving a sea turtle.

Mini DiverCity has a timely environmental theme (and fantastic name – DiverCity, get it?) It’s pretty easy to get into the cooperative spirit while fighting to save starfish and crabs. The rule book also contains some facts on the species you’ll be working to save as flavor text. As an educational tool, it’s a great concept, and backed up by some genuinely challenging coop play. I tried this with multiple groups of different sizes, and each was no walk in the park (snorkel in the reef?)

Since the corporation will get more turns based on the number of players, the closest you can get to easy-mode will be choosing your initial difficulty. Afterwards, it’s a frantic race to save animals and prevent hotels being built. Every turn needs planning – one or two wasted rounds will spell the end of the reef in short order. I found that while more players increased the frenetic pace, it also added to the fun of co-op while presenting some great opportunities. Too many players though, and there can be more discussion than game play.

Mini DiverCity also contains a number of variants for beginner and more experienced gamers, as well as a completely non-verbal mode. (Not shockingly we did find the hand gestures got somewhat more frantic and rude as the state of the reef became more in peril.) There is a solo mode included, but this feels somewhat tacked on.

Mini DiverCity combines a great message with fun gameplay. The theme really sets the tone for cooperative play. This work-together nature of the game coupled with the ocean facts would make this a great educational tool. Classroom setting or not, Mini DiverCity is a fun game with interesting, quick play that would be a a great addition to the libraries of folks that enjoy challenging co-operative play.

Final Score: 4 Stars – Fast, thinky co-operative play with a timely theme. Deeper than your average 15 minute game, and emphasis on working together.

Hits:
• Short playtime, but not light and fluffy.
• Dependence on other players cuts back on alpha players.
• Fun facts add an educational component.

Misses:
• Solo mode isn’t really a mode at all.
• Too many divers can mean too much chaos.