We review Meltwater, a two player wargame published by Hollandspiel. In Meltwater, each player controls one faction from a war that has destroyed most of the world and must now live in Antarctica. 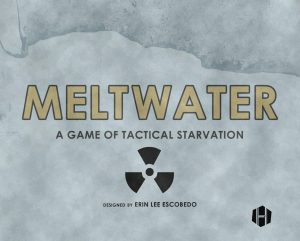 Themes can carry a good amount of weight, while also being abstracted at the same time. War games are perfect examples of this. In many cases, the tensions and obstacles of war are abstracted, such as terrain affecting value or equation in determining if a shot lands. The game I am reviewing today, Meltwater: A Game of Tactical Starvation, is another example of just that. You play as either the United States or the USSR in an alternate timeline where the Cold War ended in a nuclear conflict, and the only inhabitable landmass for the two sides and all remaining civilians is the cold of Antarctica. While bleak in upfront tone, Meltwater is able to tow the line between abstraction and thematic in its pieces, mechanics, conflict, and strategies.

Players in a game of Meltwater alternate turns back and forth, completing the same three phases: starvation, action, and doomsday phases. Each hex can support a certain number of units, which can be adjusted by terrain, radiation, and friendly stockpiles. If a hex exceeds the number of units that it can hold, units are forced to leave until it’s at the threshold. A unit first attempts to flee to an adjacent hex with a friendly unit. If none is available, it will try to defect to the enemy, becoming one of their units. If there are neither, the unit will starve, seeing that there is no food available on an empty hex.

Once all hexes owned by the active player (and neutral pieces) are checked for food, then four action points may be used. Units may move from one hex to another. They may transport their stockpile to another friendly adjacent hex. Neutral civilians in the same or adjacent hexes can be press-ganged into joining the faction of the active player, as long as there is a friendly soldier or friendly civilians outnumber the neutral pieces.

Enemy units can be threatened, pushing them around, using the same checks used for press-ganging. If two opposing soldiers are adjacent, then an attack may be initiated, killing both and causing radiation to spring up. A player may opt to change one or two of their civilians into soldiers, but must forgo the rest of their possible actions.

In the doomsday phase, the active player looks at the first card that is already flipped up. The two black coordinates represent where new radiation enters Antarctica. If that hex already contains radiation, then it goes in the closest hex to it. The white coordinate is where a new neutral civilian arrives on the continent. That card is discarded, the other face up card moves down, and a new card is drawn to replace the old. This is so that players can know in advance what hexes will be affected on their upcoming turn.

Meltwater continues until one player is completely wiped out. Once that is the case, the last player standing is the winner, even though their own end is inevitable if the timeline continued.

When I took a look at Nights of Fire in early May, I made note that units only featured symbols and combat that is streamlined to the point that the cooperative mode has no luck involved. Meltwater takes that one step further. All civilians and soldiers only have pictures on them depicting the two, and have white, blue, and red backgrounds to show the different factions. The only stat on a chit is a tiny “+1” on the stockpiles, which just affects their survivability, not their strength in combat.

And even outside of the components, the actual combat is incredibly barebones. Most of the interaction is made up of pushing groups of units around that are smaller in size, rarely inflicting casualties, unless forced to push a unit into a radioactive hex. When a battle is started between two soldiers, they both are removed, and the nearest dirty hex becomes radioactive.

So if very few losses are inflicted by the actions players take, how can one win? It’s through the use of the starvation and doomsday phases, which are like weapons. I wasn’t quick to understand it, but the radiation is not just something to avoid on your turn. When you see the coordinates on the doomsday cards, you are also thinking of ways to push opponents units closer to the oncoming nuclear destruction. And when a black radiation disc is added to a hex, everything dies there, no questions asked.

The starvation phase is also where the tagline “A Game of Tactical Starvation” gets its name. While one can prepare on their turn for radiation, starvation happens first, and after the opposition takes their turn. Units have no allegiance to their side in Meltwater. If there is a way a unit can survive, it will do it, whether it means moving from their current home or defecting to the enemy.

Moving away from gameplay, Meltwater comes in the same skinny box that Hollandspiele is known for. The paper map (I know, sighs from some of you) and chits have a different scent due to the ink used in their print-on-demand model. But know that it is due to their materials used in printing, nothing more. The chits themselves are quite thick compared to other wargames, and the map, while paper, is quite clean and easy to decipher.

The setting becomes almost entirely abstract once play begins, but the bleak nature of Meltwater is felt when teaching the game, and particularly once the game finishes. With one faction remaining on Antarctica, the black discs surround the last units. Thinking in terms of mechanics, those units would be gone in a short time if one or two more doomsday phases were to happen. Maybe that is the feeling Erin Lee Escobedo is attempting to portray in her first published design. My reading into it is that if the Cold War had escalated into a nuclear war, would the US and the USSR fought until neither one existed?

Meltwater almost feels like a blend of an alternate history wargame and an abstract strategy game. The majority of the game is focused on positioning. The combat is luckless, and the only bit of luck the game provides is the flipping up of a doomsday card, and even then, players have a full turn to prepare for its destruction. The variability is minimal due to a single map and no differences between the US and USSR. The set up is about the only thing that will change each play, and even then, that can be limited. Even so, it’s hard to find a wargame that is this interesting without more than ten pages of rules.

Final Score: 3.5 Stars – Meltwater is able to create an engaging wargame that offers intricacies unseen in the genre with a mechanically sound and simple backbone for new and veteran gamers.

Hits:
• One of the cleanest designs in terms of wargames
• Interesting use of all phases for attacking the enemy
• Unique strategies compared to all other wargames
• Mechanics create for smart and rewarding turns

Misses
• Only variability comes in set-up
• First play can be tough to grok due to unique nature
• Combat is sparse for a wargame
• Tone of the game is a little too bleak, particularly weaponizing starvation