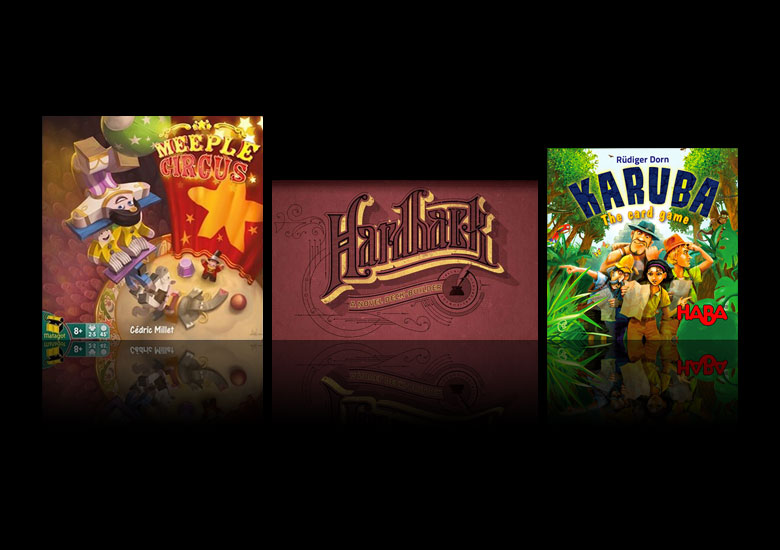 After a brief hiatus of a few months we are back with another edition of Parental Guidance. This is the article series where I play game with my parents, and then my mother chimes in with her thoughts on the games, giving you the perspective of how fun the game is for a non-gamer. As usual, the goal is to help you find new and interesting games you can play with not only your family, but friends as well. By now you should know the drill. So I’ll just get right into the good stuff.

Quick Summary:
Meeple Circus is a dexterity game with a great theme that will have players balancing acrobats, animals, and other circus-themed objects. The game is played over three rounds, with the first two being played real time using an integrated app that even plays circus music.

My Take:
I was on a really big kick of playing this game and thought my parents would enjoy it. The theme is very fun and the rules are easy to pick up. Stack your components and do it quickly. While the integrated app is really nothing more than a glorified timer, I thought that the music it played was a really nice touch.

Mom’s Take:
It’s a cute colorful game. I hadn’t played a circus theme game before or a board game where they have you use your phone to play music for the game. Having the circus music playing in the background while you’re stacking the Meeples was a nice distraction!

Stacking them wasn’t easy though, especially if you have big fingers or unsteady hands. I wasted time because I had to remember that certain color Meeples get points for being on the ground, others for being stacked on top of another. I liked the round where you have to do something like eat a sandwich, or clap when you add a Meeple. You need that nonsense in a circus! It’s fun, different game for adults and older kids. And it’s pretty easy to play.

Quick Summary:
Based on the original family game of the same name, Karuba: The Card Game is a quick filler game where players are once again trying to get their four explorers to their matching temples. This time, players are playing cards into their own 4×4 grid, two at time, using an easy bidding mechanic.

My Take:
I needed something quick and light and Karbua: the Card Game fit the bill. I knew I could quickly and easily explain the rules, so we could get right to playing. I had only played it once before, but I thought it would be something they would enjoy for its simplicity if nothing else.

Mom’s Take:
This game plays quick and was pretty simple for me to learn and play. The game reminded me of a puzzle that you had to complete, and since I enjoy making puzzles, this could be why I found it to be so fun. I also liked that you’re not depending on the other people you are playing with to complete your grid. Everyone works on their own to get their explorers to their temples and decide where the best spot to place them in your grid. I’d buy this one and play it again.

Quick Summary:
A combination word game and deck building game, Hardback is the spiritual successor to designer Tim Fowers Paperback. Each player starts with a deck if identical letters, and then needs to try and build words from the cards in their hand. Eventually they will be able to buy better and more complex letters that can chain off each other to score points and provide income.

My Take:
Ever since I got into modern tabletop gaming (many years ago), I’m always looking for replacements for mass market games. Hardback easily replaces Scrabble in my collection as it gives me a word building game that is able to sidestep all the pitfalls that makes Scrabble such a mediocre game. Knowing that I used to play Scrabble with my parents as a kid, I figured this one would be right up their alley as something they are familiar with, yet better.

Mom’s Take:
I think with this one, you would need to play it a couple of times to pick up on strategy; the best cards to buy, understanding the different card powers, things like that, in order to make it more fun. This was the first time that I played this game and after 30 minutes into it, I was ready for it to be done. Since it was the first time I played it, I was busy trying to remember what I needed to do on my turn and come up with words. The wild card idea is nice though. You have options for making words so you don’t have the long downtime that you sometimes do in word games like Scrabble where you have to wait for someone to come up with a word. I want to try this one again. 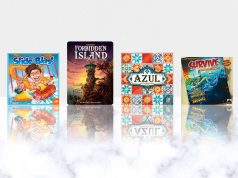 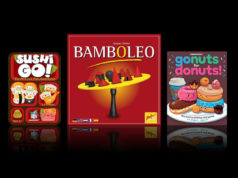 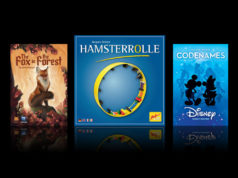 Fox in the Forest, Hamsterrolle, and Codenames: Disney Review