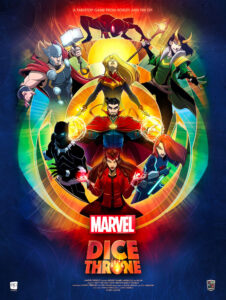 Back in 2019, I reviewed a fantastic-looking dice chucker called Dice Throne Season 2. It’s a dueling game that will have you taking control of one of a handful of unique characters, hoping to take out your opponent. The gameplay was engaging, streamlined, and a ton of fun. Since then, I’ve gotten in more than my fair share of games of Dice Throne, and it has turned into one of those games that I’m always willing to play.

Today, we are going to be looking at the newest offering in the Dice Throne line. This time, with a theme that just a few people may have heard of. Enter Marvel Dice Throne. That’s right, the gameplay from Dice Throne joins up with the legions of other games in the Marvel universe. Excited to control Captain Marvel, Thor, or maybe even Loki? Then read on as we dive deeper into Marvel Dice Throne.

But for the uninitiated, the quick of it is that you choose a unique character to control, start with 50 hit points, and some combat points. Each turn you can play some cards, roll your six dice (with 2 rerolls), and try and get some runs or sets to activate your character’s powers to attack your opponent. Reduce your opponent to zero life and you win.

Since I’ve already gone over my thoughts on the gameplay of Dice Throne in my Season 2 review, I’m not going to rehash what I said there. Nothing about the gameplay has changed, and neither has my opinion of it. It’s still pretty awesome. So we’ll focus instead on the characters that come with Marvel Dice Throne and how they play.

Thor: As you might expect, Thor is a bit of a beat stick. However, he doesn’t totally focus on high amounts of damage. Instead, he has his trusty hammer, Mjolnir, that he will throw at his opponent. Whenever he does, he’ll plink his opponent for a point of damage. But then he’ll need to spend a separate action to retrieve it, but doing so earns him an electrokinesis token, which he can be used to draw cards or boost abilities. Thor is a solid, all-around character that doesn’t really focus on status effects, but focuses more on damage.

Scarlett Witch: Another spell caster, the Scarlet Witch uses the power of chaos magic. She has four different status effects that she can call upon, and many are used to change things about the game. For example, her probability manipulation can change the effects of her dice, while reality warp will force her opponent to substitute one of their dice for one of hers during their turn. That makes it so whatever symbol they roll on that die is useless to them. She also has powers that will transfer status effects between players or even do damage for the number of tokens on a character.

Loki: Oddly, the only villain to appear in Marvel Dice Throne, Loki is also one of the more complex characters in the game. As you might expect, Loki focuses a lot on trickery. He also SUCKS to play against. One of his main powers is his illusion status effect. When he’s attacked, he can spend an illusion token to force his opponent to choose one of his three illusion cards: one is a complete miss, one reduces the damage to half, and the last is full damage. I can’t even count how many wasted attacks I had against Loki. He also has a spellbound power, that will stop his opponent from using abilities on their board for a turn. I’m always happy when my opponent doesn’t choose this slippery charter to play.

Captain Marvel: Another straightforward character is Captain Marvel. Like Spider-man, she has a difficulty of 2 out of 6. Her best power, arguably, is her cosmic ray. It lets her add the value of 2 dice to one of her attacks. Her cosmic flare token can be stacked up to 3, and does a point of undependable damage during her upkeep phase for each token she has of that type. If you are looking for an easy character that won’t take much learning to get to the table, Captain Marvel is it.

Miles Morales Spider-Man: One of the easier characters to play is Spider-Man. Most of his powers focus on doing damage, and his abilities go along with that. His main ability is Combo, which lets him get a second offense roll phase in a turn. That one can be pretty punishing for his opponents. He also has a webbed effect, which lets him turn his defendable damage into the undefendable type. And to go along with that, his invisibility power lets him defend against his opponent’s undefendable damage. He also has two different defensive powers and can choose whether he wants to try and avoid some damage, or dish out a counterattack.

Black Panther: Following Captain Marvel and Spider-man on the complexity scale, Black Panther is singularly focused on his Kinetic Energy. He can stack up to 8 of those tokens, and for every 2 he has, he boosts his attacks by 1. Once he hits his stacking limit, he gains two combat power, draws 2 cards, and deals 5 undependable damage. Almost all of his powers focus on giving him Kinetic Energy tokens, and he has a passive that allows him to gain a token whenever he takes damage.

Dr. Strange: He is, without a doubt, the most unique and complex character in the set. He is the only one with the standard “upper left” ability that just doesn’t just do straight damage. Instead, he is more so focused on his spell book. He has 9 different spell cards that he can prepare and cast. They all do a variety of different things from dealing damage, to healing, to applying status effects. His three different status effect tokens will either stop his opponent from drawing cards, allow him to draw cards, or allow him to restart his offensive roll phase. His complexity is at 5 out of 6, so be prepared to get creative when controlling Doctor Strange.

Black Widow: Finally, there is Black Widow. She is a versatile character who has the ability to upgrade her powers very quickly. She starts the game with all three of her Covert Ops tokens, which she can spend to put an ability upgrade directly into play. Once she has 5 upgrades in play, all of her attacks add an extra point of damage. The other interesting ability she has are her Time Bombs. She has two of them, and if they stay on your opponent for two turns, they explode for 4 points of damage.

This was one of the harder games to review for me. I think that’s because it’s just more characters for Dice Throne. I love this game, it’s excellent. But there wasn’t a ton for me to say about the gameplay that I didn’t already say back in 2019. My feelings for the game haven’t changed, so, again, go back and read that review if you want to know about the gameplay. However, I can say the characters in Marvel Dice Throne all feel really thematic, and as a lifelong comic reader, I think Roxley Games did a great job of tying them to their source material. And in case you were wondering, yes, the game is fully compatible with Seasons 1 and 2. So you can have the monk or gunslinger face off against Black Widow or Thor if you so choose.

If you are trying to decide which version of Dice Throne to get, it really comes down to personal preference. Are you a Marvel fan? Get Marvel Dice Throne. Don’t like Marvel? Get either Season 1 or Season 2. Just love dueling games? Get all three!

Final Score: 4.5 Stars – An already excellent game that takes its gameplay to the familiar confines of the Marvel Universe.

Misses:
• Doesn’t branch out very much from the core game