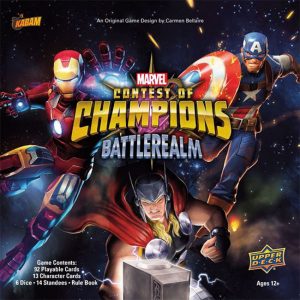 We’ve seen our favorite superheroes battle against dastardly villains on the big screen and even in other board games, but today they are fighting against each other. Taking its theme from comic series of the same name (and the subsequent mobile game) in Marvel Contest of Champions: Battlerealm, players will take the role of their favorite Marvel hero in a dice-chucking fight for supremacy against their fellow good guys.

Marvel Contest of Champions: Battlerealm is a dice rolling combat game for 3-6 players. It doesn’t play well at any player count, but you’ll only hate your life for like 30 minutes (probably less when you quit before it’s over).

In Contest of Champions, each player will roll 6 dice on their turn with up to two re-rolls. There are two die faces, mutant and science, which automatically lock and cannot be rerolled. These won’t do anything harmful unless you end your turn with three or more. Three mutant dice will see you sent off to the Crystal Prison location, ending your turn. A trio of science dice will cause an explosion, damaging you and everyone at your location.

Each location has a special ability that affects the players there and a number of points you earn when you reach that location. Each superhero has special passive abilities as well as unique power cards that can be activated if you roll the needed results with your dice.

If at any point during a player’s turn they reach 21 points, they immediately win the game. Otherwise, play continues until someone does or all but one player has been eliminated from the game.

On the face of it, Contest of Champions should be somewhat like a Marvel-themed King of Tokyo game. You roll dice, Yahtzee style, and try to either accumulate points or defeat the other players. The addition of special abilities and powers for each character should give the game lots of nuance and replay value.

The presentation is solid with each character having a cool standee and a points dial that explains their powers. There are lots of heroes in the box, including Captain America, Hulk, Black Panther, and more. A few odd inclusions (Civil Warrior and Guillotine?) and some glaring omissions (umm… Spider-Man?), but overall it’s a good roster. Just too bad it isn’t a good game.

Unfortunately, it’s these huge amounts of variation and content that really seems to be the game’s downfall.

First, unlike King of Tokyo, your health and points aren’t separate. If you are dealt damage, you lose points. Characters can start the game with a different number of points, but generally, most characters begin with 7-9 points.

Many of the stronger attacking characters, like Black Panther, for instance, can deal 5 or more damage in a single turn. It’s possible that a player can be eliminated from the game without ever getting the chance to take a turn. And it’s not possible in a theoretically improbable way, it’s more likely to happen than not if playing with 5 or more players. Often in my plays, we’ve taken pity on a player to spread the damage out rather than try to eliminate whoever is going last, but it’s only this compassion that will save you.

Never fear though, some characters have a “survivor” characteristic, that gives them another turn after their points are reduced to 0, so long as they aren’t one of the last two players left. And that bonus turn will almost definitely save your life as any mystic die result will give you a point and you can earn points by moving to a new location. But if more than three players in the game have “survivor,” you’ll never be able to win by eliminating all other characters. Players will have to just agree to stop attacking and see who can accumulate the most points or it will literally never end.

I’m all for a brainless dice-rolling good time. But even when immediate player elimination and overlapping player powers don’t get in the way, there isn’t really any fun to have. Deciding what dice to keep is really the only decision space in the game and it rarely matters. Two of the die faces can’t be re-rolled to begin with. Three of the others either give you a point or take a point from someone else. The final one is movement, which can potentially earn you multiple points. So maximize movement all of the time and just deal with whatever else you get.

Oh, and if you have the flight ability you never need more than one die to move. So you’ll probably win. Unless you die before you take a turn.

It has been a long while since I’ve had such a bad experience at the gaming table. Lightning fast player elimination to go along with end games that drag on (or possibly never end) is a bad enough start. But it isn’t just bad when it doesn’t work, Marvel Contest of Champions: Battlerealm isn’t fun even when the rules don’t get in the way.

Final Score: 1.5 Stars – The theme is great. The presentation is great. Give it to your kids to make up their own game.

Hits:
• Great comic art and a good line-up of characters to play.

Misses:
• The game seems to be lacking balance and certain combinations of characters can change it for the worse.
• Most of the die results do, more or less, the exact same thing.
• Player elimination can happen much too quickly.