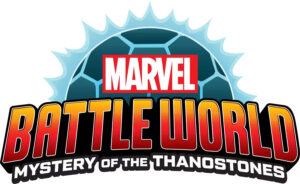 I remember not too long ago having a conversation with some other board gaming aficionados about the lack of Marvel licensed games. There were a few mass-market games, Dice Masters, and Legendary at the time. Now you could fill up a Kallax with Marvel games.

Today we are looking at Marvel Battleworld. Maybe it’s just an excuse to collect cool looking Marvel figures, but technically there is a die and some rules… is it worth playing?

The game starts with each player taking one or more heroes. Each round, you’ll add battle cards equal to the number of the characters in the game. Then, every hero can move to a battle and attack!

Each battle has an attack target that you need to meet or exceed to win. Based on your specific character’s attack abilities you may be more or less likely to win at each location. Then you’ll roll the d12 and add your character’s ability for the particular battle to the total, if it exceeds the target you win, if not you lose. There is also an auto-win and auto-lose result on the die.

To complete a battle, you’ll have to win more than once, depending on the number of spaces on the hit track of the battle. If you lose, you’ll add a marker to the danger track. After all heroes have taken a turn, you’ll flip the danger coin and exceed the danger track marker for all battles that match the result (sun or moon).

Some battles are “Thanostones.” When you win a battle for a Thanostone you get to open one of the hidden characters (if you haven’t opened them all yet, of course). That new hero can join the fray and also move and attack in the current round.

It’s important to talk about how you buy this game. You get started with a “mega pack.” It comes with 4 opened characters and two hidden in Thanostones. You can also buy individual battle balls that come with two characters within the aforementioned Thanostones. But it’s all blind-box collectible type of luck of the draw going on here.

These miniature figures are cool. It’s more than the standard-bearers of the MCU. You’ll find characters like Howard the Duck, Spider-Ham, and Dino-Thor. Zombified versions of some villains like Red Skull and Venom. Transparent “Infinity” versions of some of the superheroes as well.

Considering the battle balls that come with two heroes run about $6, it’s not a bad deal if you are into collectibles. Most miniature figure blind-boxes run a similar price. You’ll get two here (although they are a bit smaller, 1-2 inches tall) and a cool battle ball that can be used to display them.

But this isn’t a toy review channel. As a game… it’s fine. Especially for younger kids. My 7-year old enjoyed playing it and opening the toys as we did. Once we opened everything, he was a bit less interested in playing more. It amounts to rolling the die and seeing how you did.

The fact that each character has different strengths are different locations is cool. The coin-flip advances the danger on each battle and lead to some fun high-risk flips. It’s ultimately a good-enough distraction. It’s a clever way to give you something to do with your blind box collectibles before you just open them up and put them on a shelf or something.

Think of it this way: Marvel Battleworld doesn’t really come with any box to put all your cards and miniatures in and fit them with the rest of your board games. They are designed to be displayed and collected. If that’s something that is of interest to you, the game the comes along with it is fun enough that you will probably play it when you get new Thanostones rather than just crack them open.

Marvel Battleworld is a collectible first and foremost. If you want a new game to play with your children, you can probably do better. But if you want a shelf of plastic Spider-Hams, you are in luck.

Final Score 2.5 Stars – Cool figures and a game of sorts to play to open them.

Misses:
• Game seems secondary to the collecting portion.
• Not a lot of depth