We review Mars Open, a dexterity game published by Bellweather Games. Mars Open is a tabletop golf game where you will be flicking your way to par for the course. 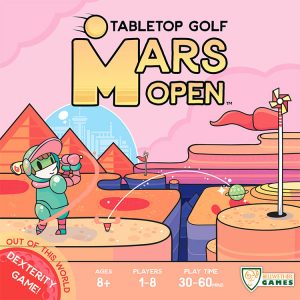 I have a solid love for dexterity games in my life. If it flicks, stacks, bounces, or balances, I’ll give it a shot. Some of my fellow BGQ reviewers even refer to dexterity games as “sport games”. While they are most likely trying to mock my love of hand-eye coordination, never has that been more accurate than with today’s review of Mars Open from Bellwether Games. Mars Open is literally tabletop golf, so grab your goofy pants and “shhhh” sign and we caddy up to the table.

Ever played a game of mini golf? How about paper football? Great! You’re ready to play Mars Open.

In all seriousness, games of Mars Open take place over a 9-hole round of golf. Each hole has a specific setup as laid out in the rulebook. Plan on placing obstacles, tees, sand traps, with the box actually serving as the hole. Players take turns trying to flick their paper golf balls into the hole using the fewest strokes possible. After finishing each hole, the next one is set up. After 9 holes of golf, the player with the lowest score wins.

While the rules overhead are incredibly light, that doesn’t stop Mars Open from being a fun game. Even though it’s not going to be for everyone, I was quite entertained flicking my way through the golf courses in the game. Mars Open is casual, silly, and easy to jump right in and start playing. Yet it’s probably not a game you are going to build a game night around. When it comes to flicking games, this is about as light as it gets (and that’s saying something).

Despite the light exterior of the game, Mars Open also allows players to perform trick shots with the goofy shaped “balls”. And much like games of mini golf, nailing a particularly impressive hole-in-one is sure to elicit cheers from your fellow players. Sure it’s still a competitive game, but it’s also hard to take things too seriously when you are flicking things around your tabletop. It’s that type of gamer that will be most attracted to Mars Open. Someone looking for a game that’s easy to drop on the table, hold a beer in one hand, and flick a golf ball with the other.

Which makes Mars Open open a hard game to review. For the most part, people will know what they are going to get when they look at the back of the box. You know the rules already, you’ve been putting around mini golf courses since you were a child. Could everything here be replicated with stuff around your house? Probably, but it would lose some of its charm. The obstacles and golf balls all look great and work well for what they are supposed to do.

Our only real gripe with Mars Open was that setting up the courses took about as long as it took to play them, which was a tad annoying. But there isn’t really any way around that short of replaying the same course (which no one wants to do). I also found that Mars Open works much better with a larger table. Have a small table and the hole will be over way too quick. We had the most fun when it took 3-4 shots to really reach the hole (outside of the crazy trick shot).

If Mars Open looked fun to you and you were considering picking it up, I say go for it. You know exactly what you’re getting with the game and it makes the perfect beer and pretzels type of experience. Rule explanation is basically non-existent and I’ve played it with gamers as young as 8 years old with no issues.

Mars Open may be a one-trick pony, but it does that trick really well. Even if you don’t want to spend the time recreating the pre-made courses in the rulebook, just toss stuff on the table and make your own. Mars Open is quick to play, fun on the table, and is everything you’d expect from a flicking golf game—both good and bad.

Final Score: 3.5 Stars – It’s golf on your tabletop, what more else needs to be said!

Hits:
• As casual or as competitive as you want to make it
• A fun, flicking experience
• Virtually no rules overhead

Misses:
• Needs a large table for the best experience