We review Manhattan, a Spiel des Jahres winning area control game published by Fox Mind games. In Manhattan, players are competing to control different districts in the city of Manhattan. 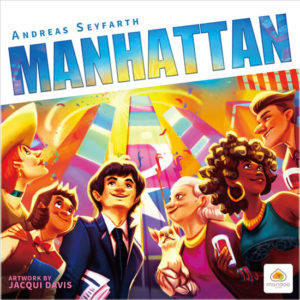 Game awards are an interesting subject. At the end of the day, they’re one group’s opinion, but they also color the conversation about what games should be granted accolades. Prestigious awards such as the Spiel des Jahres (literally game of the year) in Germany have a big voice in that conversation. When a game wins this award, usually discussions then turn towards the pros and cons of the jury’s voice and its purpose.

Manhattan, a game which won the Spiel des Jahres in 1994 just got a reprint with fancy new colors and transparent plastic buildings. The concept hasn’t changed. Players act as land developers placing buildings in one of six development zones. Points are awarded for building ownership, most buildings in a zone, and the highest building overall. It’s a quick area control/abstract game for 2 to 4 players which plays in 45 minutes or less. With this title, it’s more players the better.

Play of Manhattan is simple, almost elementary. Each round of the game, players will select 6 building pieces after looking at their cards in hand. The cards show which placement locations on six different 3×3 grid zones where players are allowed to play pieces.

Each turn, a player uses one card to place a building piece in a zone. If the player is placing a piece on top of existing pieces, they must have, after placement, as many floors as the current leader in number of floors. For example, if the leading player in a building has 5 floors already, the placed piece must result in the new player having at least 5 floors as well.

At the end of each round, points are awarded. Every player gets 1 point for each building they control. They get 2 points for each zone where they own the most buildings. Finally, one player gets 3 points for having the tallest building in terms of number of floors.

As an area control fan, this game is just right for yours truly. It’s a simple, direct style of majority control game with limited choices and some pre-planning built in. The challenge is perfect for the kind of game it is.

Now, most likely there are two questions which will hound readers: “Is this Spiel des Jahres worthy?” and “Does it still hold up against games today?”

The answer to both these questions really depends on what players expect from today’s games. The Spiel des Jahres award generally favors lighter games with a little bit of depth. That is certainly the case with Manhattan. It fits right in with what that jury would be looking for as well as being a great introduction to majority control scoring games (when you can’t find Tikal).

As to whether the game holds up today, if players are used to games which integrate their themes more tightly and demand just a bit more rules, they are likely to be disappointed. Even older games like El Grande throw some shade on this design. However, that’s not to say that Manhattan isn’t good, just a bit dated.

All in all, the redesign and new production is a good introductory game for those shopping for a light area control game. It could even be considered a filler for two players, but gameplay at that count is not recommended. There’s some depth, but likely the gameplay will pale once more robust games are discovered.

This game is a great fit for those looking for an introductory area control experience or itching to own a blast from the past. Today’s modern strategy and abstract game fans will probably be done with Manhattan after a few plays, but it does give a decent experience. However, this title really only shines with three or four players. Manhattan is worth it as an XL filler to shave some time while waiting for heavier games.

Final Score: 3 Stars – A nice production of a classic, but the years show the change in tastes more with this design.

Misses:
• Can stale fast
• Not as complex as some would like