We review Maki Stack, a dexterity board game published by Blue Orange Games. In Maki Stack, players are trying to quickly and deftly stack familiar items from a sushi restaurant. 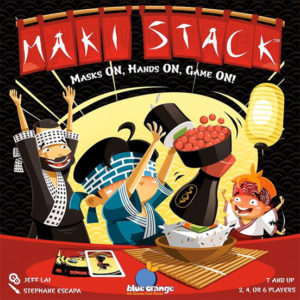 Play with your food! In Maki Stack you’ll race the clock and your opponents to balance plates, bottles, and sushi. Only those with the best balance and correct combination of items will be the sushi master.

Maki Stack is a Dexterity game for 2, 4 or 6 players that plays best with 4.

Maki Stack is a competitive dexterity game based on stacking objects you’d find in a sushi restaurant. The game has two game types; two player and team.

Two player is pretty straightforward. Each player gets a Sushi Mat and a set of stackable wooden items (cucumber roll, roe, California roll, soy sauce, plate). The stack of challenge cards is placed face down in between them. One player flips a card and players race to stack their items identical to what is shown on the card using only one finger from each hand (called chopstick mode). Matching the card is important – sometimes an item is maybe upside down or sideways. The first player to complete the challenge wins the card, first player to collect six cards wins.

For the four and six player variants, players divide themselves into even-numbered teams. Each team gets a sushi mat, a red mask, and a set of wooden sushi objects. A challenge card is flipped. If it is a yellow chopstick mode card then teammates work together using a single finger. If the card is a red mask mode, each team picks a player to wear the mask, this player stacks the items while their teammates describe the stack and give them directions. In both modes, teammates that are giving directions cannot touch the stack. Winning teams are awarded the card, and the first team to collect six cards wins the game.

We’ve all been there – sitting in a restaurant, waiting on food, trying to pretend you’re patient. So you put the salt shaker on the soy sauce bottle. Then the sugar container on that. Pretty soon you’re scrounging napkins and wine glasses from two tables over.

Maki Stack puts those skills to good use. It takes about five minutes tops to teach, and from there, it’s all about balance and fast hands. Turning items on their ends is funny and creates more stack variation, but the real twist is chopstick mode. Try and pick something near you up right now using just one finger on each hand. Seriously, I’ll wait for you.

That was way harder than you thought, right? Now imagine using that to turn and manipulate pieces AND stack them into a stable tower. Banging out a tower isn’t so simple when you’re having trouble lifting and controlling the pieces themselves. Add into that being blindfolded and ‘directed’ to make a stack and there are a lot more pieces falling than stack making. If you want the six challenge cards you’ll have to work quick and accurately.

I appreciate that despite going to six players, there are really only two teams. With just one primary mechanic it could be a really long game. As it is, an evenly matched set of teams can draw this out, and communications breakdowns during the blindfolded challenges can drag on. Additionally, since it’s all based on time, this doesn’t really have an accessible mode for folks that struggle with dexterity games.

This dexterity game will show off your fast stacking skills. One page of rules means your group will be ready to play in no time but lack of variability may start to wear thin over time. Maki Stack is mostly about the group – those with good verbal skills that are out for some laughs will enjoy it, but more competitive folks that struggle with communication may want to give anything but 2 player mode a pass. Cute, high-quality art and components will have friends asking for Maki Stack by name.

Final Score: 3.5 Stars – Speedy dexterity-based game that’s great for casual game nights, maybe not so much for those looking for something more cerebral.

Misses:
• Sole mechanic can wear thin
• May be a struggle for those with communication challenges