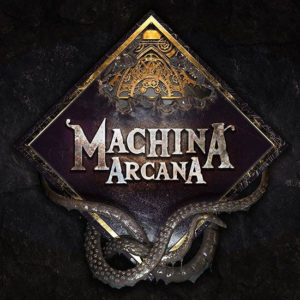 It was about three years ago when I posted a review for the Machina Arcana. I really didn’t know much about the game before receiving a copy except that it was a Cthulhu & Steampunk themed. Well that was an understatement. The KS version I received blew me away. The detail and effort put into the game and design was apparent when I first opened the box and when I got it to the table. Unfortunately, the 1st Edition never had a second printing and was only available on secondary markets.

This brings us to today’s preview of Machina Arcana ~ From Beyond. This 2nd Edition gameplay is once again a cooperative, horror themed, tactical dungeon crawl. Machina Arcana plays with 1-4 players and plays in a about 60-150 minutes. Like most of you let’s hope this new edition is improved and not a brand new game? Let’s find out.

The Machina Arcana ~ From Beyond base game mechanics mirror the 1st Edition. There are still four phases that drive the gameplay: Explorer, Spawn, Horror, and Monster Phases (two are retitled from the 1st Edition but still primarily the same actions occur). Instead of going into full detail of the gameplay it would be best to highlight the changes for From Beyond and give the link for those who want a full reference to the official page for draft rules: Machina Arcana ~ From Beyond rules.

Explorers: The “use inventory” ability allows explorers to equip, unequip, or trade items to adjacent explorers. Willing and adjacent explorers can now share their essence to the activated explorer so they can use it to interact with elements on the board or abilities. Lastly, the explorer death is permanent; the player does not take control of another explorer instead that player takes control of the monsters.

Items: There are now 4 different item decks: apparel, weapon, artifact, and consumable and expanded to 150 items instead of a single treasure deck. Items can now be upgraded in addition to the 1st Edition augment rules.

Monsters: Their abilities are stronger. When monsters are destroyed, if that monsters’ level is lower than the current monster level on the chapter board it is not recycled back into the monster deck but is now removed from the game.

Chapters: The scenarios are still driven by the chapter card deck but these are longer and are more story-driven than the 1st Edition. The From Beyond Edition also includes blocker chapters and many more explorer interactions with monsters, map elements, etc. to progress the chapter cards. And lastly, the end game is much more involved as the final scenario challenge.

Events: The explorer events are still beneficial for explorers and require activating the event space, but now some explorer cards having bind effects that become part of that explorer’s card. Also gone are no the longer quest explorer events. And any events now have 3 abilities: active – pay the activation cost to use ability, passive – continuously influencing explorers and the game, & enters play – resolve once when played.

The first thing to highlight with improvements is that the difficulty of play has been increased. Personally I love challenging games because if it’s hard to win, then victory is that much sweeter. From Beyond monsters are overall more challenging with stronger abilities. Difficulty is also increased because when a lower level monster is destroyed or banished, it’s taken out of the game.

The gameplay has become more challenging because the scenarios have longer chapter decks and the end game is much more involved. To be honest, these are not just challenging, it but makes the game very hard to win. Who doesn’t love a challenge, right? The last change that increases the difficulty is that when an explorer dies that player takes over and controls the monsters. Monsters are normally mindless, following simple rules. When a player takes control, monsters can now spend stamina like explorer’s and can interact with map tile elements and become much less predictable.

Now you could be saying to yourself “so Machina Arcana ~ From Beyond is more challenging, great, 1st Edition was no cake walk.” The rule improvements also help to balance the gameplay by giving advantages to the explorers as well. The “use inventory” ability increases the overall co-op gameplay and helps adjacent explorers by equipping, unequipping, and trading items when it’s not their turn. Also, willing and adjacent explorers can now share their essence with the activated explorer to interact with map tile elements. The “use inventory” and essence sharing are huge because in effect the explorers are maximizing the explorer phase and that can mean life or death for explorers.

Overall, I think the biggest improvement is that the chapter cards with the preview scenario was much more story driven. The flavor text ties nicely into the chapter abilities or the elements that the explorers need to interact with to progress to the next chapter card. 1st Edition interactions felt a little random and were simple by comparison. The other aspect that I absolutely love is the end game. The designer described the end game as a mini-game and that’s so accurate. The end game card is much more involved than the chapter cards with its own map tile, victory, and defeat conditions really make it a stand out as challenging game within a game.

I love and still own my copy of Machina Arcana: 1st Edition. It was hard to believe that a game could replace it but I’m eager to see and own the final version of Machina Arcana ~ From Beyond. Juraj Bilić and his team have done an excellent job improving an already great game.

Machina Arcana: Second Edition improves upon elements in the 1st Edition by increasing the game difficulty but also balances it by adding advantages to explorers as well. It does not punish players as some games do. If players work together two things will likely happen. They might share a victory but more likely is that they had a great time with an improved 2nd Edition. Look for Machina Arcana ~ From Beyond on Kickstarter on September 4, 2018.