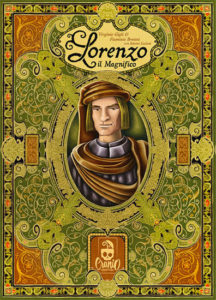 The Italian Renaissance in the 15th century was a time of revival and renewal in terms of trade, art, culture, and expansions of power. This was partially achieved through a recovery of Greek classics found in the middle east, and the expansion of trade routes therein. This accelerated meeting of different minds helped create a new start for northern Italy. It is not unexpected that another meeting of minds, between the designers of Egizia and Voyages of Marco Polo, brings forth an offering that puts CMON Limited on the map as a publisher of Euro games.

Lorenzo il Magnifico is a worker placement, tableau building, and resource management game for 2-4 players. It takes about 30 minutes per player and plays best with 4 players.

Each player is an Italian Renaissance family seeking to impress the church and expand their power. This is accomplished by acquiring cards representing lands, people, activities or ventures. Dice-based workers are placed to action locations while resources such as wood, stone, and money are managed to the highest efficiency. Victory points determine the winner.

All the components are of pretty standard Euro descent, but the main appreciation goes to the art. Just like the game design collaboration, three high quality artists with pedigrees across quite a few Euro games have produced outstanding, if somewhat conventional, visuals.

Klemens Franz, Andrea Kattnig, and Andreas Resch have masterfully illustrated and accomplished solid graphic design and illustration that needs very little explanation. Those familiar with icons from other Euros will recognize the tropes and be able to dig right into the meat of the game.

Overall, the play for Lorenzo il Magnifico is quite simple. A set of three colored dice are rolled, which represent the dice-pip strength of three out of the four player workers. During each round, players will be placing these workers in spots in four towers to acquire four different colored cards. Also, each of the four vertical spaces in a tower requires certain dice-pip strength for placement. If a player wants to place a worker, but does not have the right number of pips, they may spend purple assistants to increase their pips on a 1-for-1 basis.

Additionally, the first player to place a worker in a tower does so at no additional cost. Any other player playing in the tower must pay 3 coins to the bank to do so.

Other spaces are also available that change player order or provides resources. These spaces are usually a consolation for getting blocked, but are also important to maintain flexibility in placing workers.

Finally, two additional action spaces relate to yellow (merchant) and green (land) cards. Green or yellow cards are “activated” by placing a worker at the harvest area (with an axe) or production area (with a gear) respectively. Each spot only activates the cards which have an equal or lower pip value of the worker placed. Again, assistants spent can increase the die value.

At the end of the game, final points are tallied from cards acquired and potential points subtracted from not supporting the church in the final round. The player with the most points wins.

Besides amazing sports cars, delicious food, and gorgeous art, Italians know how to make great games. Such is the case with Lorenzo il Magnifico.

Other than the wonderful art, tremendously tight gameplay will be the first thing players encounter. A recitation of rules to new players causes those expecting a quaint worker placement game to drop their jaws in awe. The worker placement restrictions are a challenging obstacle, especially when the dice rolls remain low throughout the game. Even though this is a random element punishing players, it never feels punitive and it’s reassuring to know all players share the same challenge.

This tightness causes a laser focus on acquiring just the right card combinations. Often cards are taken by opponents who are just one action ahead, with players groaning over the consequences. With only 24 moves through the whole game, making the most of each move is essential.

This may cause a strange epiphany amongst players. The mechanisms in Lorenzo il Magnifico are all well known. There is nothing new in the game that hasn’t been done by other well-known games. However, the interplay between worker placement spots, dice-workers, and resources has been fine tuned to Ferrari proportions. This leads to a feeling that something indefinable and new is at work.

Lorenzo il Magnifico also falls into some of the same negatives as other great Eurogames. The fine tuning is most evident with four players and the lower player counts merely close off spaces which are otherwise extremely valuable. In addition, each game allows for all the cards to make an appearance, thereby lessening new experiences in replay. Every game will feature the same cards, just in a different order and Lorenzo il Magnifico really needs some kind of expansion content to throw wrenches in the works.

Lorenzo il Magnifico is an excellent, engaging game. It verges on perfection, but its minor problems are enough to think twice before playing. Once players have played a few times, it remains enjoyable, but plays become indistinguishable from one another without an expansion to add new variety. Even with this, for this reviewer, Lorenzo il Magnifico gorgeously sweeps away Castles of Burgundy to represent the new iconic Eurogame with dice experience.

If you’d like to pick up a copy of Lorenzo il Magnifico, you can get it for about $60.

Final Score: 4.5 Stars – Hits all the highlights of Eurogaming with tight, challenging, play, even if it needs just a touch more for replay value.