We review the Scoundrels of Skullport expansion to the popular worker placement game Lords of Waterdeep. This new expansion adds two modules for players to choose from during the game. A variety of new game play elements are added to the game all without sacrificing the accessibility of the game. 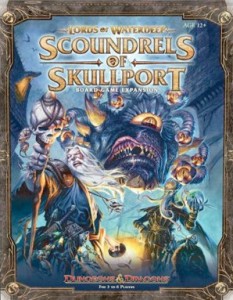 Scoundrels of Skullport comes with a number of new components in its box to enhance the play experience for Lords of Waterdeep players. The first thing you will notice are the 3 mini game boards come in the expansion, these are worker placement locations for Undermountain and Skullport, and a Corruption track that is used when playing with Skullport. There is a set of player components added for the Gray Hands faction; this allows Lords of Waterdeep to be played with up to 6 players.

Also included are 6 new Lord cards, 50 intrigue cards, and 60 quest cards. I should mention that the printing quality wasn’t the best with these cards. The color on the card backs are slightly off from the base game and the quest cards are printed upside down. Nothing that will ruin your game experience, but I ended up putting mine in opaque sleeves so I wouldn’t notice the difference. Finally, the expansion comes with 24 new buildings to be used with each of the two modules.

Speaking of modules, gamers who buy Scoundrels of Skullport will be getting two separate expansions in the box. These two expansions can be added to Lords of Waterdeep separately or combined into one mega game.

The first expansion is Undermountain. If you want an expansion that players will be able to jump right in with, then this is your baby. One of the main themes behind Undermountain is that everything is bigger. There are now quest cards that go as high as 40 victory points! This makes the base game 25 point cards seem just average in comparison. Another thing about Undermountain is that it’s much easier to play intrigue cards. The expansion comes with 3 new, permanent worker locations on a separate board. One of these spots lets you play an intrigue card and another will let you draw two. Many of the buildings in Undermountain will also let you draw and play intrigue cards. While using these spaces don’t let you reclaim a worker at the end of the round (ala Waterdeep Harbor), it does stop you from getting shut out of playing a card at all. If you are looking to up the stakes in your Lords of Waterdeep game, then this is the expansion for you.

The other expansion that comes with the game is Skullport. The main theme behind Skullport is resource collection and corruption. Skullport is going to make it much easy for you to get those resources you need into your tavern; be it adventurers, money, or cards. However nothing comes without a price. Skullport introduces a new game mechanic to Lords of Waterdeep called corruption. The game designers did a great job with the corruption mechanic, which is quite clever. Each time you go to a space with a corruption icon, you take a token off the corruption board. So that tempting space that provides you with 4 adventurers (that’s equal to two worker placements on the main board) also is going to saddle you with a point of corruption.

At the end of the game, each corruption token you have is worth negative victory points. But how many negative points do you ask? Good question! The more corruption tokens that are missing from the corruption track will actually increase negative point value you will eventually pay. So one token that was only worth -1 at the start of the game might end up costing you -8 points at the end of the game. The more corrupt the players are, the more they will pay for it. It’s a really clever mechanic that can keep the winner of the game in doubt until the very end.

The main thing I want from a game expansion is for it to add variety to my game without upping the complexity too much. When I add in an expansion, I don’t want to feel like I’m learning the game over again from day one. It should seamlessly integrate with the base game, while providing me with some new play options. The Suburbia Inc expansion did an amazing job of that.

Well I’m happy to report that Scoundrels of Skullport does that in spades. For those looking to just jump right in with some new options, then Undermountain makes a perfect choice. To be honest, I don’t see much of a reason to ever play without it. It adds a little bit of variety to the game with zero complexity increase. More worker placement spots (balanced by giving an extra agent to everybody), increased player interaction through all the intrigue card locations, and the high value quest cards can create some interesting strategies. Those 40 points cards can take quite a while to complete, but the payoffs are pretty huge. Playing Lords of Waterdeep with the Undermoutain expansion should be a no-brainer in my opinion.

For those looking for more variety, then Skullport is there. As I mentioned earlier, the corruption mechanic is fantastic and works really well in the game. Those spaces are very, very tempting yet no player wants to acquire a too much corruption. It’s a careful balancing act that will create some very hard decisions during the game. Skullport makes it much easier to get adventurers into your tavern, which in turn allows you to have an easier time completing those high point quest cards. However, the trade-off is staring you right in the face. Luckily, there are some buildings that will let you send some corruption tokens back to the track (or even out of the game), but if those don’t end up getting built, a player could be sitting on a large pile of negative VPs at the end of the game. You’ll have to carefully weigh how much of a risk taker you are to succeed in Skullport.

While I don’t usually play this way, die hard Lords of Waterdeep fans can probably get a lot of mileage out of combining both expansions into the game. To do those, you’ll need to remove some cards and buildings from the base game to keep the balance just right. This not only adds to the setup time, but also to the play time. Players are looking at bumping the game from 60 minutes up to about 90. That’s not too bad, but probably a bit longer than I want for Lords of Waterdeep. Even with the expansion, it’s still going to be a light worker placement game and 45-60 minutes feels at about the sweet spot for this game. Still, it’s nice to know the designers thought of that as an option and provided guidelines for doing so.

Finally, including components for a 6th player was a nice touch. It wasn’t crucial, as we rarely have wanted to play Lords of Waterdeep with that many people, but I’d rather have the option then not. Adding a 6th player does increase the play time some and definitely isn’t the most optimal of player counts, but those with large gaming groups will appreciate the flexibility it offers.

Other than the minor component issues, there really isn’t any reason for a fan of Lords of Waterdeep to not pick up a copy of Scoundrels of Skullport. It hits on all of the right spots for a game expansion. Scoundrels of Skullport succeeds in adding a good amount of replay value and variety to your game, all without sacrificing the accessibility that has made Lords of Waterdeep such a hit.

If you are interested in getting a copy for yourself, it’s about $29

Hits:
• Easy to integrate with the base game
• Increases the replay value
• Minimal increase in complexity
• Adds components for a 6th player