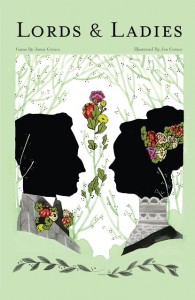 Not all intrigue is about spies and espionage between countries. Some can also take the form of jockeying for position within a strict and unforgiving social hierarchy. Who you and your children married, your wealth, and your status were vital to surviving the social minefield that was Edwardian-era England. Think Downton Abbey, Titanic, and Howards End when trying to picture this era of history.

Lords & Ladies gives you the opportunity to take control of a family in this time, trying to make matches of your children with suitors of status, hiring servants to do your bidding, and spreading gossip about your rivals. Does Lords & Ladies successfully navigate the tides of high society, or end up a failed house, bereft of status and wealth? Read on to find out!

In Lords and Ladies, you are overseeing the growth, rise, and fall in status of your family by arranging marriages, having children, and hiring servants. As the game progresses, you build your family tree in order to gain the most status. As children are born and marriages are arranged from eligible suitors, you can hire servants that have special powers and confer bonuses. At the same time, you can spread gossip about your rivals, causing your opponents to suffer substantial penalties and drawbacks. The first player to reach 18 status points is declared the winner.

The components in Lords and Ladies are of extremely high quality construction. The thicker card stock of the cards that represent the lords and ladies in your family are nice and sturdy, and stand up to multiple “write and erases” over many game sessions. The gossip and servant cards are also of high quality. The wooden components are standard for a hobby board game, but are a welcome bonus to the box. The addition of a quality dry-erase marker is probably the most notable of the components, as most games that include a marker usually include ones that last a single gaming session.

The artwork in the game is average, neither contributing to or taking away from the game experience. It may be that the game art is inspired and derivative of the artwork of the time period the game is simulating, which would help support the theme.

In Lords and Ladies, your goal is to increase your family’s status by expanding your family tree and hiring servants, while preventing your opponents from achieving their goals. At the beginning of the game, you start with a single lord or lady (which you get to name), gold, and a number of gossip cards. The first set of suitors and servants are displayed for acquisition, with these cards cycling as the game progresses.

On a player’s turn, they can take one of four actions.

1. A player can marry an available suitor to one of their unmarried lords or ladies, with each suitor adding additional status and bonus powers to a player’s family.
2. A servant can be hired, by paying the requirement fee in gold, with servants bringing either one-time or continual bonus powers to a player.
3. Married couples can attempt to have a child by rolling a d6 lower than the combined couple’s birth points (which vary between lord and ladies).
4. A player can elect to simply earn a gold piece and add it to their supply.

In addition, players can play gossip cards to mess with their opponents. The trick with gossip cards is that they need to be “confirmed” by another player by playing the same gossip card or a “True” card. These cards have nasty effects that cause the loss of gold, family members, and servants. As the game progresses, players can earn Award cards based on their play, adding to their status total. Status is tracked over the course of the game, with the winner being the first to reach a total of 18.

Lords and Ladies presents a set of rules that is very easy to pick up and a game that is easy to get into. The game is very light, with very little in the way of underlying strategy or careful gameplay required in order to be successful.  The game is reliant on making the best choices based on the available suitors and servants, which cycle after every turn.

While the game moves quickly, there are some mechanics that may prevent this game from being an enjoyable and equitable experience. Since having children is based on the roll of a d6, a string of unsuccessful rolls can set a player back quite a bit relative to their competition. In some of our plays, a player who rolled three unsuccessful birth rolls at the beginning of the game was essentially eliminated right from the get-go.

The real enjoyment of this game came from the creation of the narrative and story around the cards that are played as the game goes on. We are fans of any game that allows players to create a story around the game, and Lords and Ladies provides this in spades. Even though we are not Downton Abbey watchers, we found it very easy to create a humorous and engaging story. Allowing players to name the lords and ladies as they are born only added to the fun.

The gameplay effect of the gossip cards was a welcome addition to Lords and Ladies, since there would be very little in the way of player interaction without them. However, we felt that some of the gossip cards effects were a bit unbalanced and could have a major swing on the game outcome. We felt similarly about some of the bonus powers on the lords, ladies, and servants.

The game is designed to play between two and five players, but we found that the two player game’s special rules did not really help make the two-player experience all that fulfilling. Since this game is good to create a shared story, we found that more players improved the game experience.

Lords and Ladies is a light game that is good as a warm-up for an evening of gaming, but can be passed on if you are looking for a deeper and “thinkier” type of game. With the rules so easy to learn, it is a game that is accessible for gamers and non-gamers alike. Being a Downton Abbey or Masterpiece Theater fan will only add to your enjoyment of the game. While not the deepest game out there, Lords and Ladies does work well as a filler game.

Final Score: 3 Stars – A decent filler game, but a bit too light to expect anything more.

Hits:
• Creating a shared narrative around gameplay
• Theme is supported through gameplay
• Creativity in naming the lords and ladies
• Sturdy and quality components
• Easy accessibility due to straightforward rules and gameplay

Misses:
• Little player interaction
• Play can get repetitive with multiple plays
• Some card powers were observed to be unbalanced