We review Loot, a quick playing auction game for 2-8 players. In Loot, players are pirates trying to amass the most dubloons by scoring merchant ships. Quick playing yet still a ton of fun, find out more in our full review. 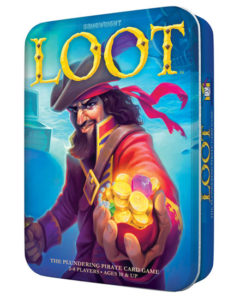 Pirates. Once they were they were the darlings of the board game theme hivemind. Today, they still make the occasional appearance but they’re certainly not in vogue. One release from way back before even pirates were a thing is the card game Loot. It’s got a new printing from Gamewright.

The concept of Loot is about as simple a pirate concept as there is. Players play pirate ship cards to attack merchant ships laden with dubloons. The scallywag who lays her low with a pirate ship card with a higher mark than other knaves will be sportin’ a grog blossom from all the spirits downed in merriment. That and they be takin’ the pirate ship card as plunder.

Sorry. It’s an addictive theme. Loot is essentially an auction game for 2-8 buccaneers that takes about 20-30 minutes to play. It plays best with 3-5 pirates.

The rules for Loot are easy, but the choice presented each turn makes for the engagement. On a turn, each player will either play a card or draw a card.

When playing a card, the choices are as follows:

If a player is winning any ship auction(s) at the start of their turn, they take the merchant ship card(s) and keep them face down as a score pile. The hearty who holds fast to the highest score o’ dubloons from their galleons be the scourge of the seven seas and all the rest be nothin’ but bilge rats.

Sorry. The theme can be addictive in this game.

Loot’s staying power has everything to do with its simplicity and speed. It comes across as a great filler game with auctions (battles for ships) going around the table like lightning. The ability for this game to accommodate eight players is directly due to the quickness of play.

The challenging decision with each turn is the other element of worth. With more players, multiple auctions can be in play on the same turn and players get a choice of continuing the bid on a ship or starting their own. The play style can work for two players, but more players in the game offers more options. The real choice is one of playing safe with low-value merchant ships or saving up for going after the galleons with huge tracks of dubloons.

The main negative here is the randomness. There’s little, if any, control of cards to receive and so players can end up with hands that have meager attack options. It’s not a huge deal because of the quick play time, but gamers looking for that quintessential auction game won’t find it here. This game is about attacking, pardon, bidding for other players’ ships.

Buccaneers atop the lookout searching the seas for a sutler plying wares of pirate pleasure need look no farther than Gamewright’s Loot. These buckos be coming about with another hold full o’ quick fun, and play always feels like another draught o’ Nelson’s folly! Those scurvy dogs who be hangin’ the jib should come about and give this chase a try. All landlubbers shall walk the plank and hornswogglers will be dancing the hempen jig.

Final Score: 4 Stars – Landlubbers seekin’ their sea legs will be givin’ no quarter and tellin’ tall tales after playin’ a game o’ Loot, even with a deal o’ cards as accurate as hail-shot.

Misses:
• Randomness
• Not so great with two players