Board Game Review by::
Brandon Bryson

We review legacies, a heavy euro game published by Brookspun Games. In Legacies, you are taking the role of a prominent person of the 19th century looking to make your mark on society. 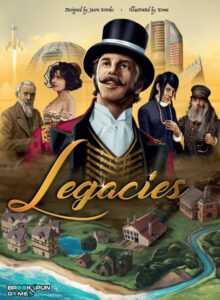 I’m at my desk, typing away at this review when the door bursts inward, and two children rush to my side. “Dad! Dad!” shouts the oldest, only five feet away from me. The youngest watches my fingers type this sentence and waits for a reaction. “Dad!” The youngest’s eyes go wide, knowing that the older is pushing too hard. I continue to type as the oldest rushes around the desk to tug on my sleeve. The youngest has already left the room, quiet as a mouse. “Dad! Can you hear me!?”

As I continue to type this review and ignore the oldest child, I think to myself about who these two will become when they reach my age. Will they, like me, just want to write their own board game review and be left alone? Or will they forge new paths, develop lasting relationships, and accumulate fame over the years?

Legacies, designed by Jason Brooks and published by Brookspun Games, provides us with an opportunity to tackle three centuries of— “Dad! Dad!”

I will the thought of these two imaginary children out of my mind. Childless, I decide that my legacy can wait for another day. But the review, the review must go on.

Legacies is a heavy economic strategy game that spans three centuries and six generations. Each player starts as a character type that has a specific relationship to all other characters. For example, the Socialite archetype is amicable with the Underworld Boss and the Promoter, but hostile toward the Politician, the General, and the Inventor. Each character is also linked to specific industries. Our Socialite is connected to Theater and Communications, obviously. Characters have special abilities that feed into their type as well.

During a turn, players simply play a card from their hand and choose one of the actions on it. Each card has three sections: the top features ways to make relationships or take opportunities, the middle refers to buying or selling investments, and the bottom relates to resources and heirlooms.

The mainboard features a circular central area that represents the characters and their relationships (there are tracks for marking this which degrade over time), as well as a stock market of all ten industries that are influenced by investing. Players use cards to add their relationship tokens to the board and take associated bonuses or invest by adding major or minor investment tokens which shift the values of the market. Through these actions, players build resources, gold, extra cards, or even fame. And by investing, players can potentially divest at opportune times to increase their fortune.

Once two cards have been played by one person during a generation, the opportunity to trigger Global Action tiles presents itself. For the round to end a certain number of these action tiles must be activated, including two that are mandatory each generation. These global actions benefit everyone to a certain degree, but the person who triggers one receives an additional powerful bonus. These actions range from investments, to relationships, to dividends, to industry influence, and heirloom scoring. There’s even a trade conference that can be activated.

As a generation progresses, certain actions require a player to choose a new successor for their family. Typically, there’s a choice between two options, and it is important to note that not all successors are beneficial. A new successor is chosen each generation and may influence a family’s actions significantly.

During a century’s end, a scoring phase occurs based on certain events that played out during the generation. New centuries bring new board overlays that increase the value of industries and relationships, and new card decks are introduced with progressively more lucrative options. Once three centuries have passed, final scoring proceeds.

The overview is truly glossing over a lot of the contents of the game. There’s an exploring the city action, special character actions, the foundation, the different sides to each player board, legendary figures, the turn order honorarium, and impact icons. This is a Lacerda-adjacent beast of a heavy euro that goes all out trying to develop theme and integrate systems.

I have two big takeaways from my plays so far. The first is that this game shines with four or more players. In fact, it plays to six, but my second takeaway is that this game overstays its welcome. My two sessions at five-player were a blast but have pushed over four hours each time. Yet, it almost feels necessary to have more players at the table to integrate the relationship system to its fullest potential. Without the central board filled with characters, it begins to feel too wide-open and loses a lot of its potential.

With that said, there’s a lot to like with this system. The card play is elegant (reminds me of Lisboa at times) and the inclusion of a three-card open market that you can trade out cards with during your turn (as a free action) is an excellent bit of freedom. The relationship integration is intriguing and adds just enough overhead to infuse theme to each choice. And the shared stock market has each family wheeling and dealing to improve their available assets. Character heirlooms and special actions also add thematic elements to keep play engaging.

Game progression is also intriguing. As each century passes, not only does a family receive a new successor, but relationships begin to decline on the board, shared mid-game scoring goals begin to add tension, and the race for heirlooms heats up. Add to this the amazing idea of adding inflation that coincides with the centuries passing, each board overlay introducing a more modern setting, and gold tokens increasing from tens to one hundreds to five hundreds, and it’s easy to see how time was woven into the mechanisms.

Even the option to include an honorarium for any player who is unable to complete their final turn upon a generation end is a clever way to handle turn order woes. It’s a simple thing, to be given an option to gain something when you don’t get that final turn, but it’s almost more satisfying than finishing a round and then playing a full new round to balance things out. I hope more games embrace this idea (apologies if I’ve not played enough games with this option).

There are also moments of choice that do not work as well and a few of them seem to be directly related to game length. First, the mandatory Global Action tiles dictate the generation end. Yet, the non-mandatory global actions don’t have a limitation and may all be activated before the two mandatory tiles are activated. Putting a limit on how many non-mandatory global actions are triggered would help alleviate generation length and see the fight for both turn order and specific actions filled with much more tension.

Second, the mandatory global action that has a player choose an event to trigger (either top or bottom event on a card) which dictates which scoring tile to choose feels unnecessary. It adds a little narrative flourish to each session but also adds unwanted overhead and slows the gameplay down. Plus, the event cards have little impact. I’d much rather forego any narrative ties to the century-end and game-end scoring and find a different way to approach this business.

Our group may end up house-ruling both areas to improve upon the game length. This is a game that’s quite fun to play but will rarely see the table in its current state. As such, I hope the designer finds time to consider options that will allow for a balanced approach to shortening length without corrupting the design. I’d also like to see a way to tighten the board in lower player counts that still maintains the relationship dynamics between players.

Designer James Brooks should be proud of this design. It’s not that often that you get to generate a new product for the industry and receive comparisons to one of the greats. For our group, every excellent idea at play had an adjacent element that we wish would have been paired down. With tweaks to the global action tiles and scoring system, this design would find a more streamlined approach and a wider audience. It all comes down to game length in the end. The box states 90-180 minutes. Few games are as generous at showcasing a longer length of play. It’s unfortunate that the game pushes beyond the 180 minutes for our group.

Returning to the imaginary children successors from the intro, I realize that when diving into learning this game I was much more like the older child, eager and anticipatory. But after a few plays, I now feel a little like the younger child, slowly sneaking away from the room to find a less consuming environment to occupy my time.

Final Score: 3 stars – An intriguing heavy strategy design that brings something new to the table, then brings more to the table than necessary.